90s industrial holds a special place in my heart. It was an effective political voice for the disaffected youth growing up with no real prospects in a pre-virtual age but it was also (in equal measures) hard, heavy and catchy as hell. Factor in its tolerance of alternative lifestyle choices and openness to deviance in all walks of life and I was sold [1]. It also opened my eyes and ears to other areas of musical extremity, where my peers tended to get stuck on one narrow aspect of a much wider spectrum. Imagine my joy, then, at the prospect of a revival of this overlooked and often maligned area of musical output, manifesting in the form of 3TEETH.

Imagine also my disappointment when my ride into the realm of nostalgia was abruptly curtailed by, <shutdown.exe>, their second record. What promised to be a contemporary revision of the jarring, offensive and provocative releases of the likes of Ministry and Nine Inch Nails ended up as a softer, pop-driven anthem for today’s apathetic youth. Gone are the drug-fuelled emotional rampages of bands in the industrial/metal heyday [2] that would leave mental scars across a listener’s psyche, replaced instead with mild, self-deprecating humour and a gentle nudging to be a little naughty – rather than explicit urges to civil disobedience and sexual depravity. 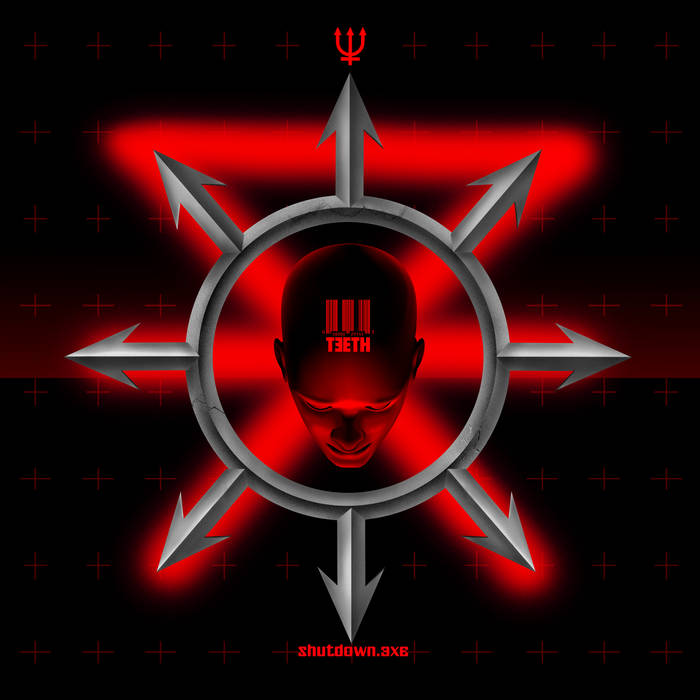 All the right ingredients are in place – heavily distorted guitars, square wave bass synths and barked vocals in the vein of Young Gods, Die Warzau or Stiff Miners – but the ensemble effect is too easily accessible. Even the band’s aesthetic – which draws heavily from the black leather section of the catalogue – is more Hot Topic than Satanic biker thriftshop. Even Zodiac Mindwarp and the Love Reaction [3] put more grime and crime into their outfits. On top of this, a quick glance at the label Bandcamp and its deconstructed, redacted document graphic approach à la Se7en’s opening credits sequence [4] reinforces 3TEETH’s admirable attempt to recreate a 90s industrial aesthetic in every way they can. 3TEETH are definitely making the right noises, but come across as being a little lig in die broek [5] – the closing track, ‘Away From Me’, for example, starts with an air raid siren peal that calls to mind the rhythmic noise of W.A.S.T.E’s ‘Shut Up and Bleed’ but quickly fades into soft-rock obscurity in comparison to the no-holds-barred assault of the latter example [6] of harsh industrial done right.

In their defense, nods are given to all the stalwarts of the golden age of industrial by 3TEETH: the off-kilter percussion of ‘Tabula Umbra’ would make Cevin Key and Skinny Puppy proud, while echoes of Downward Spiral era Nine Inch Nails filter through on the atmosphere in ‘Voiceless’ (which features a very tasteful female vocal performance, too). They also channel some of the pop sensibilities of Pretty Hate Machine NIN on ‘Oblivion Coil’. And my personal favourite on the album, ‘Pit of Fire’ somehow blends Gary Numan-esque vocals with something that wouldn’t be out of place on a Ministry B-Side around the time of The Mind is a Terrible Thing to Taste. If the whole album sounded like this track, I’d be in heaven: ominous reverb-laced guitars, stop-start percussive devices, a wide vocal range and the whole tied together with smooth electronic stabs.

In this light, musically speaking <shutdown.exe> is not an awful tribute album: in the late 1990s, any number of bands – Gravity Kills, Stabbing Westward, Drown, Sister Machine Gun, Peace Love and Pitbulls etcetera – all tried to revive the first half of the decade’s blending of snarling electronics and metal guitars – 3TEETH actually achieve this, only with the tighter polish of contemporary production values. They also are not the first industrial band to ‘clean up’ their sound to achieve more mainstream appeal – KMFDM’s ‘Juke Joint Jezebel’ was famously featured on the Bad Boys soundtrack in 1995, long before Marilyn Manson became a Hollywood staple. Incidentally, ‘Insubstantia’ is a 3TEETH track begging for inclusion on a movie soundtrack – it’s just menacing enough to be edgy (with a great hook in the form of the unexpected female vocal), but still safe enough to be inoffensive.

All in all, I think 3TEETH mean well, but haven’t got the social adversity behind them that the best industrial music has always sprung from. Even industrial’s greatest international success story, Rammstein (who 3TEETH will be the support act for in their next US Tour) hail from Soviet East Germany, not fiercely liberal California. While 3TEETH’s self-titled debut in 2014 hinted at something really exciting, I blame Tool for giving a success story and a studio budget to a band that needed a bit more “suffering artist” in their history. [8] <shutdown.exe>is a good electro-rock crossover, but it should be classified purely as a tribute to 90s industrial, rather than a contemporary version thereof.