A housemate of mine once described the music I listen to as “people banging garden furniture together and screaming.” Funny as that image may be, the world of metal – indeed, the alternative scene at large – will always be home to strange bands. Stolen Babies, for example, were originally sold to me as “Tim Burton does heavy metal.” Other barmy barnstormers include Mechanical Poet, jazzy toe-tappers Diablo Swing Orchestra, basically anything involving Mike Patton, and the experimentalist’s experimentalists, Canadian weirdos UneXpect. [1] French experimental metal oddballs 6:33 (nothing to do with John Cage) are another addition to this proud tradition of off-putting oddity.

With Deadly Scenes as their third studio album, 6:33 might best be described as ‘weirdo metal’: they’re definitely not writing prog, nor are they as overtly experimental as UneXpect, but the songs they sing are undeniably weird. Opening your album with a gospel choir certainly isn’t normal in the world of metal, and it’s the little flairs like this, along with frequent tempo changes and kooky lyrics, which set them firmly at odds with more middle-of-the-road bands.

Starting as they mean to go on, 6:33 kick off the album with ‘Hellalujah’ and a gospel choir invoking Lord Jesus as their saviour and guide. ‘Ego Fandango’ (which coincidentally lasts 6 minutes and 33 seconds) swings from tempo to tempo; it begins with a synth organ played over a Southern Baptist-style preacher preaching damnation, which leads into the whispered lyrics “Your tits and ass ain’t good enough for me.” The song then moves to a slow piano ballad moment, juxtaposed with a power-metal guitar riff, which is then followed with a Queen-esque vocal harmony. Later on, ‘I’m A Nerd’ opens with a full choir singing what sounds like a Te Deum [2] and closes, amusingly, in a nostalgic manner with the dial-up internet tone from the time of the dinosaurs. Between these comedic bookends is a crushingly heavy song with stop-start rhythms which would otherwise, just be a slightly eccentric metal song. Finally, album closer ‘Deadly Scenes’ is both a delightfully dark-humored song about the inner struggle between good and evil, and a re-working of an Eminem classic called ‘Guilty Conscience’. This is not a sentence I ever thought I’d write about a metal song. [3] All this serves to show just how quirky the band are, and what’s more, they pull it off with aplomb. 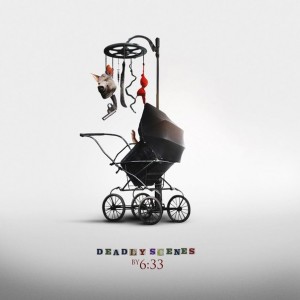 However, despite how off-the-wall they are, it is arguably the case that 6:33 don’t necessarily bring anything new to the weirdos’ table. They’re not pushing any particular boundaries, and certainly not the envelope, they’re just having fun. They’re kids in the avant-garde ball pool doing music the Aperture Science way: by throwing music at the wall, seeing what sticks, and clearly having enormous fun doing so.

This brings me to my next point. The album, out for well over a year by now, has met with a lacklustre critical reception, which may puzzle some considering how unique the music appeared until this point. One review I discovered for Deadly Scenes is from Angry Metal Guy, and it’s worth discussing. [4] One of AMG’s reviewers, Roquentin, notes that they have been widely described as avant-garde and takes umbrage at this, writing the album off as a proud sum solely of its influences and thus not being avant-garde enough to warrant the description. He does have a valid point in this; the band aren’t much more than the sum of their influences. Take Mike Patton, for instance. His penchant for rhythmic weirdness has definitely influenced the composition on Deadly Scenes: catchy as the songs are, nearly all of them swing in tempo in a dizzying, skilful, but ultimately very Patton-esque manner. ‘Black Widow’ and ‘Ego Fandango’ are prime examples. [5] Patton’s vocal style is also a major influence on the band, to the point where a casual listener might be forgiven for thinking he was a guest. In almost any other band, borrowing so heavily from a major influence would result in a lazy, incoherent mess. 6:33, however, manage to pull this off thanks to the tight chemistry that allows the weirdness to gel into coherent songs, each with their own unique identity, without feeling forced.

Roquentin is also correct, to a lesser extent, in saying they aren’t avant-garde. But, listening to the album as a whole, it’s clear they’re not trying to be avant-garde. They’ve not emulated anything that UneXpect or Mr. Bungle did, frankly because nobody can do. 6:33 aren’t avant-garde; they’re mucking around having fun. And, more importantly, it’s really, really fun watching them.

6:33 are, ultimately, a bunch of guys just having fun making music, and they should be treated as such. They’re not the next Patton, and they don’t bring much to the weird kids’ table that’s not already being played with. But I don’t think they care. They’re making weirdo metal their way, and they’re having fun doing it. And you should have fun listening.