In the past month since its release, Hello Games’ No Man’s Sky has received an unfortunate wealth of criticism, with a lukewarm critic score of 60, and a nasty user score of 27 on Metacritic. So I was not alone in my disappointment; when I succumbed to the never-ending hype-train I was sorely disappointed, with the game ultimately becoming that of missed opportunities and false promises. However, there is a silver lining.

The ambitious soundtrack to the universe-exploring game, scored by post-rock act 65daysofstatic, is a completely different story. Even though, in-game, the piano melody in ‘Heliosphere’ is used every time a milestone has been complete (there are a lot of pointless milestones), the four-piece have crafted an album that – on its own – is more exciting in every way than the game was. And having set their expectations high, the band succeed in poignantly providing a soundscape to the euphoria of exploration, and the sights of space.

It’s hard to listen to the album imagining anything but the essence of interstellar travel. Introductory track ‘Monolith’ showcases whirring, clanking noises and shimmering synths. It clinks and builds in ostensibly tribal ways with clattering drums and snapping percussion, as the pulsing becomes more frequent and the textures build. It’s a classic industrial post-rock formula, sure, but it’s so primal, and so well-layered that it’s impossible to not be excited; something post-rock in 2016 often struggles to achieve. And when the crash of static, fuzz bass reveals its dark, grumbling face, the climax is more rewarding than most post-rock crescendoes in recent years.

Fortunately, the inventive builds of the first track don’t slow their pace throughout the rest of the album. Lead single ‘Supermoon’ blasts straight off the tail-end of ‘Monolith’, with sustained guitars and 65daysofstatic’ quintessential drum-heavy grooves. Guest vocalist Debbie Clare makes an appearance, creating a choral, anthemic atmosphere. But it’s the piano motif that really shines, a four chord sequence that crops up in later songs; the riff itself encompassing all the emotion, catchiness and poignant peaks of space travel. Even towards the back-end of the track, where distorted guitar layers and dense soundscapes become claustrophobic, it still feels controlled; 65daysofstatic know how to get noisy without becoming too distressed.

In true album fashion, ‘Asimov’ moves straight out of ‘Supermoon’’s disintegrating crescendo. With this track, however, the band begin to showcase some failings. Although ‘Asimov’ is an immaculately well-composed track of electronic-tinged post-rock, its explosion is premature and predictable, lacking the emotional impact that the first seven-or-so minutes of the record previously showcased. Production issued also begin to show, with slight clipping in the left-channel, but this isn’t much of a concern except for audiophiles. 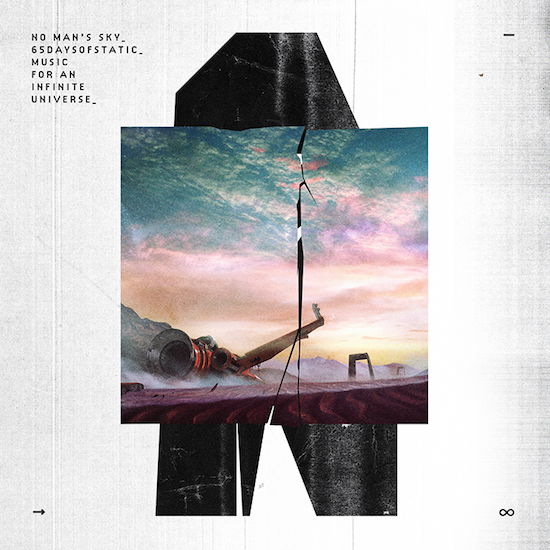 With ‘Blueprint For A Slow Machine’, the band again show their love for electronic and synth-laden music. An ode to electronic pioneer Squarepusher, the track’s use of orchestral synths propped against glitching drum machines and 8-bit melodies push the album in a completely different direction. After this, the album opens itself towards a focus of soundscapes, rather than grooving, rhythm-heavy tracks. ‘Pillar Of Frost’ is more Merzbow than Mogwai, as noisy, brutish screeches of static and feedback shower a gently-moving guitar melody. In a similar vein, quasi-ballad ‘Escape Velocity’ is a darkly beautiful track that moves with feedback guitars and – a buzzsaw guitar tone; literal sawing, fuzzy guitars.

‘Red Parallax’ does return to the older days of One Time For All Time, with a simpler approach to songwriting. Less electronically-focused, the quintet provide more of a guitar-driven sound this time around; however, it’s an unfortunately underwhelming track, that despite being a fun simple number doesn’t quite hit the mark entirely.

And then the Sheffield gang leave us with ‘End Of The World Sun’, a seven minute closer that is what I can only imagine doomsday would sound like: It’s musically simply, but chordally mysterious; there’s screeching, screaming guitars that yell over the rounded rhythm section. But then, after layer after layer add themselves, it slowly fades. It fades to be replaced by a drooping, bass-heavy synth and feedbacking guitars. There’s no celebration, there’s no reflection; it just ends. To some it may seem anti-climactic, to eschew the usual grand finale that their post-rock contemporaries would employ, but for me it showcases a band still unwilling to conform to genre conventions.

Downfalls aside, 65daysofstatic have provided possibly one of the best, and most ambitious, post-rock albums of this year. It implements a wealth of styles and sounds, from the 8-bit flavours of ‘Red Parallax’ to the harsh-noise influences of ‘Pillar Of Frost’, and fits them all together in an effortless fashion. But probably the biggest success of No Man’s Sky: Music For An Infinite Universe is the ability to make you truly believe that you’ve experienced space; or at least want to experience it. It’s surprisingly nostalgic, bringing flickers of imagery of sci-fi films and NASA footage to your imagination. So turn it up, shut your eyes, and let 65daysofstatic craft one of the best listening experiences this year.