Trending
You are at:Home»Features»Absolute Bastard: In Violet’s Amber
By Chad Murray on November 29, 2016 Features

[Editor’s note: This is a review with a difference. Rather than our conventional distant approach to writing, which strives more for an academic touch, this piece touches on the emotional and familial. Chad Murray – a talented musician in his own right, and writer for places such as Echoes and Dust – reviews the latest album of his brother’s band In Violet, within the context from which it was created. Amber is a deeply personal and political album, and this added insight makes for a unique review. Enjoy.]

I like to think I’m a writer or a musician, once upon a time an obsessive lyricist; I try to get on with guitar as I go, I try to get better at producing and mixing and composing electronic music. I’m OK en route to good. Then this absolute bastard comes along and spews his new album out, and it’s a fucking masterpiece. A dense tome rich in texture and complex thematics, articulated through every excellently executed facet. 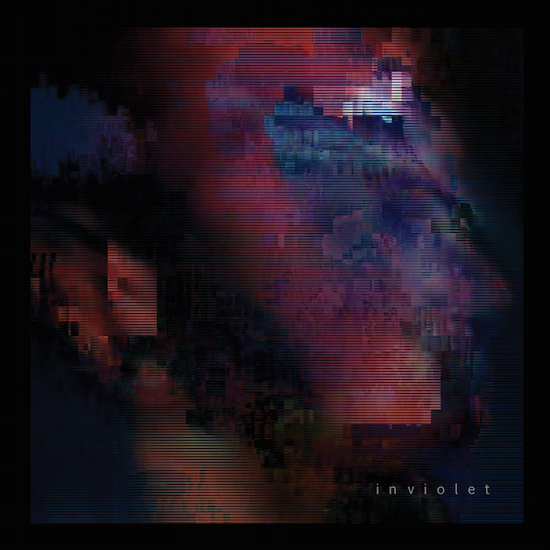 From my first listen, I was completely awe-struck. It felt as though I was listening to Nine Inch Nails‘ The Downward Spiral or David Bowie’s Low before anyone else had heard it. In that moment, everything I had done up to that point ceased to be art, and felt like childish crayon scrawls barely clinging to a refrigerator. Alone in the dark – with my eyes closed – I was swept away into a labyrinth of opalescent narcotic psychedelia and scornful societal abrasion. It was an album that encompassed the nadir of Jake’s life and an album that flashed my life before my eyes. I could inherently see the character of our family in the album: the chaos, the artistry, the self-destruction as well as the self-sacrifice and the imperative of justice which – in an unjust world – seems to come only through confrontation. It was me, right down to a T; it was our mutual experience wrapped around an album, and yet, the personal story at the heart of this drove it into a furious assault on the pitfalls of today’s society.

As the political landscape has gradually plunged further and further into the depths in Tory Britain, there has been more enmity and dissatisfaction brewing beneath the surface. The likes of Teeth of The Sea, Gnod and Hey Colossus over at Rocket Recordings [1] in 2015 and early 2016 captured the dissociative horror the UK was sinking into as it gradually became a bleaker political landscape. The rise in hallucinogens is not coincidental; people want to escape this joke of a reality that our country is becoming. We are trying to escape a media ran by one selfish, bigoted cunt who turns the poor against themselves and whose fear-mongering continues to sink us further into quicksand. We’re trying to escape an inept government that has families living off food stamps and charity like it’s the 1950s. The same government that is run by bankers and media bosses and serves nobody but the god of Mammon. This new wave of hippies and punks and the far right is all emblematic of one thing; we are a divided nation of dissatisfied people with corrupt leaders (comparable to the initial rise of psychedelics and punk in 1960s U.S under Nixon and the 70s and 80s under Thatcher) and a savagely hungry populace who want more for themselves and prey on the weak rather than police the greedy. If you wait for someone else to come and save you, you will never find solace again. This is a fight against fear, weakness, corruption and bureaucracy; this is a fight against injustice, avarice, cowardice and apathy. Take ownership, take responsibility, speak up and fight back. “Art is resistance”.

Like a John Carpenter-esque dystopian future, Orwellian pistons and the blackest night swarming like choppers and police radios, ‘Betrayed‘ kicks the album open with a steel cap boot to the teeth shattering its pulsating calm before the storm with a thunderous battlecry. A candlelit declaration surveys the situation with lyrical assertions straight from the mouth of an impending attack: “If I must fight then I’ll give it all I’ve got.” The inciting incident so telling of the time, and yet astoundingly universal. “another fatal blow to the head that should’ve listened to the heart. In an act without a cause. What did you do?” The perfect summary of conflict in a time that chooses to lash out in fear, and eradicate and persecute its enemies rather than show mercy and compassion. Then when the fight is underway through apathy and dehumanisation, the bureaucrats and the all-talk-no-walk phantoms recoil in terror and spit back vitriol when migrants and refugees and people on benefits find their survival instinct. These people, made to feel small and treated like diseased rats, fire back with a undying resilience as infectious as the hateful rhetoric that is smeared against them. Each one of these people were betrayed by the UK, and kicked to the curb when they were vulnerable and should have been protected. Each one of these people descend from a problem caused by colonialism, imperialism and corruption in our attempt at capitalism. No wonder so many poor people have drug problems; what else is their worth living for, if not happiness and escapism?

“If fear is the weakness then everyone falls”

Tortured yet, lost in a haze, contorting rapturous pulsations of bass and dizzying Eastern guitar jangles. ‘Shivers’ takes the album into the bad trip stylistic that has been emerging in all the most exciting new releases of the past few years, whether it be the likes of Hey Colossus, Teeth of The Sea and Gnod or someone like The Naturals. The visceral, mind-bending dread in the song is tangible and explicitly visualised through lyrics like: “the world around me is distorting like a hall of mirrors.” The fire and intensity of the track to me conjures a middle-ground between Black Sabbath’s Paranoid and Chelsea Wolfe’s Abyss, two similar albums birthed of disillusionment, disassociation and drug use.

‘Salome’ unravels the album through an acoustic arrangement similar to some of Radiohead’s recent work in the percussion; it maintains the impending sense of doom and disillusionment which build in the album in different forms of rage, sadness and introspection. “Salome, pass death on to me/I’m afraid of what’s in store for me.” Bill Vine (Collider)’s clarinet nicely carries over from this track leading into a King Crimson-esque masterpiece in ‘Lady Of Avalon’; this track just kills me, it’s fucking amazing. The way it drifts into a clearing, and the words descend down like falling stars being plucked effortlessly from the sky as he sings, “waltz under the moon/ripples on a lake/cascade mist sits on the lagoon/a blanket of shade fills the night.” That was the moment I realised I really needed to step my game up. That’s the moment I realised that this was a serious contender for album of the year and I wasn’t even halfway through the album, let alone the song. The instrumental breakdown and subsequent bellow of the chorus screams ArcTanGent or some other weird music festival to me. It’s soaring, powerful hippy music for twisted humans with a predilection towards unique sounds.

In the mindset of festival music, ‘Poseidon Weeps’ stands out as a particularly accessible track on the album, and seems to somehow merge its strange Mugstar-esque aura with a stadium rock twinge. It has everything; a satisfying urge for retribution, a fucking insanely brilliant guitar line, formidable chorus vocals and exceptional drumming. Drums that sound like a thousands soldiers in battle, guitars like raptors breathing lightning, a bass roaring straight from the heart of Mount Doom; a war-cry for justice in an unjust time of cowards and cut-throats.

‘Amber’ tells the story of someone lost in the deepest recesses of the self; swallowed whole and spat back out again. Overwhelmed and yet somewhat triumphant in survival and it is clear to see how this track stands at the crux of the album. Right in the afterbirth,’ Sagazan’ takes the album into wilder, noisier and more chaotic territory through layers of brutal electronics, samples of the titular Olivier de Sagazan screaming, and a beautiful melody at the centre reminiscent of Nine Inch Nails’ ‘A Warm Place’ keeping the listener transfixed in the serenity of madness and the optimistic nihilism of continued existence. It’s interesting how the album always throws its duality around with the most savage track on the album being followed by a delicate post-techno comedown jam in ‘Bereft’, singing about intimacy and unity: “when we fold into one, it is unity/just a form that we take with ease” – as Roger Waters said, “together we stand, divided we fall.”

“Reality was nothing more than a single grain of sand”

‘Ceramic‘ reveals more of the gentle interior at the album’s core, as gentle as it is lyrically with a key excerpt being, “I tried so long to be stronger, left me behind curled up on the floor,” it talks of putting on a facade of toughness while being fragile and easily shattered; this journey was arduous and pushed Jake to his absolute limit and in the closing tracks it’s transparently clear: “even though I have won, I reckon I am done.” ‘The Matador’ tells a similar story of questionable triumph; a story of an underdog who won against all odds, but it was a small victory. The protagonist is exhausted and yet the bullfighters are still in poverty, are still fighting rabid animals to the death and nothing has been resolved. As much as The Matador has saved himself, he’s licked and everyone around him still has to fight. So where is the victory? Where is the triumph when one person wins whilst the majority loses, whilst so many are dying? Who is the real winner when our lower classes demonise the migrants beneath them starving to save their families? Regret is key to the UK in this moment, and Amber reflects that perfectly. Everything is broken, we have our own fragments and I guess that’s great but the government is going to keep dumbing people down and fighting education; closing libraries, fighting the BBC, raising tuition fees, fighting civil rights and equality, removing the human rights act, removing the NHS, pitting the poor against each other and inciting hatred all the time.

There is no nepotism in me saying this is my favourite album of the year. I put it above some absolutely sterling records that I thought nothing would stand against. Most importantly, this is an album I have listened to innumerable times this year from somebody I usually spend a good chunk of time telling to shut the fuck up. Yeah, I understand all of the references and come from the same background and have a similar taste. However, I don’t have a hard time being honest with people, even less so when I’ve known someone my entire life and can say with reckless abandon exactly what I think.

Amber is an incredible, powerful, mesmerising album. Every time I finish listening to it, a new song is stuck in my head and every time I finish listening to it, I am horribly proud and envious at the same time, but overall I am blown away because it is the best album I’ve heard this year. I’m putting it over Gnod, T.E. Morris, Sex Swing, Goat, The Orb, worriedaboutsatan and Xander Harris. [2] I’m putting it over every great album I’ve heard this year even, knowing that some people may question that. I don’t give a fuck, because it is indisputably my favourite album of the year.

“A victory for the underdog”