Trending
You are at:Home»Interviews»Agent Fresco: “The most wonderful thing about this band is creating something beautiful out of negative emotions.”
By Joshua Hall on September 15, 2016 Interviews

Iceland’s Agent Fresco are a band built on passion, on a love for what they do. Unwilling to quit in times of difficulty or strain, they are simply a band that work and work, exploring music and performance in new and exciting ways, until their result reaches spectacular heights. This passion shines brightly when watching the band play at ArcTanGent festival (review here), and in speaking with them afterwards.

Dropping a bomb on the art-rock scene with Destrier last year – and A Long Time Listening five years before – Agent Fresco set a new golden standard for what modern rock music could be. An album that explored complex themes of anger, negativity and sadness, it packaged fifty two minutes of shifting sonic-landscapes, ranging from the piano-flavoured pseudo-ballad of ‘Wait For Me’ to the crushing vocal screeches of ‘Angst’. Throughout the album’s entirety, Agent Fresco proved themselves at each and every turn as fabulous songwriters.

But despite the band’s success as being a flag-bearer for modern rock music, they still stay on the path of DIY. “I think it’s a very healthy experience for a band to try and manage everything, and to know the deals behind everything,” said frontman Arnór Dan Arnarson in our interview. “Know the numbers and know the experience of really not starving – doing stuff really low budget and playing in front of 20 people. This is a thing we will always be grateful for. Although it’s tough, I think it’s necessary for bands. At least for like a year, go through difficult experiences like that.”

Destrier was a turning point for the band; the quartet improving as songwriters and musicians in every aspect compared to their previous LP A Long Time Listening. Arnor claimed that one of the interesting changes for the band is the way that the music has become more than the creation of art, but also a responsibility; “Going from creating music just for the fun of it, to it actually being a proper job and responsibilities and there’s money involved and future planning – that’s the thing that we’re always trying to learn. It’s what’s also surprised us the most; how much time it fills until you can get people working for you, to do all of that stuff (because that’s not why we started the band to begin with).”

From Björk to black metal, [1] Iceland’s musical output has been stunning at every turn. But when asked about the country’s popularity with music lovers across the world, the band seemed hesitant when specifically questioned if the educational system of Iceland was the answer. “You shouldn’t really study to be able to create,” Arnor answered after some consideration. “I don’t feel like a lot of bands study.” Drummer Hrafnkell Örn Guðjónsson – colloquially referred to as Thor – interrupted; “I’ve heard people talk that the elementary school system is very good for music; there’s good music education in the beginning.” However, when questioned if Iceland puts enough money into the arts, the band again seemed ambivalent to come to conclusion. “There’s definitely more that can be done,” said Arnor, with Thor adding “there’s also the fact that there’s no major label in Iceland.”

Signed to Long Branch Records, a small independent record company based in Germany, Arnor claimed there’s “not much money in it.” He quickly turned to joke about tribute acts; “If you want to really get a lot of money, you need to cover some tribute concerts, or cover Iron Maiden or David Bowie.” (Guitarist Þórarinn Guðnason then enthusiastically shouted “YES!” when I asked if they’d ever want to cover Iron Maiden). Arnor continued; “I was once asked to do a Bee Gees tribute, do a couple of songs in falsetto, and I was like, ‘I can actually hammer this. I want to do this. I want a wig and tight white pants.’ But that thing got postponed. But I’m always up for stuff where I see any kind of opportunity to learn and have fun.” Returning to the original point, Arnor described the struggle once more; “There’s no money. Most of the money we make goes into our equipment or touring.” 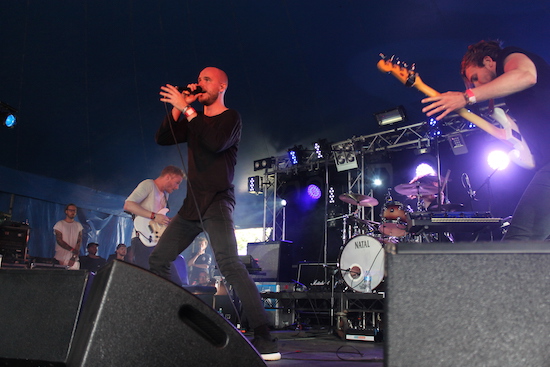 During Agent Fresco’s time at ArcTanGent, the band accomplished two sets; one re-composed acoustically with members from Talons, and the other a full-fledged electric – and electrifying – performance. But for Arnor, the intimacy of a stripped performance can be quite difficult: “When you remove that barrier of energy and loudness. It gets so stripped down, and you feel barer, and then the lyrics are more visual for me. I have more time to picture everything that I was talking about. Then it gets difficult, especially in ‘Eyes Of A Cloud Catcher’, when I literally see us saying goodbye to my now deceased father in our living room, and going through everything in the lyrics.” During the regular shows, the vocalist found the antithesis; “In the regular shows it’s not so difficult, because it’s more about the energy, more about the power of the performance and us having a shitload of fun up on stage. It’s only during the acoustic performances where I think, ‘Shit!’ It’s ridiculous sometimes because I have to stand up here and think about neutral things such as potato chips and rocks, to try and divert my mind and not think about the lyrics!”

The topic then changed to the band’s habits of practise, with an answer that may surprise some; “We barely rehearse. We barely practise. It’s not a good thing though! But we just play so much that we feel like you get the proper practice onstage, that’s where you learn the most. So that’s the only thing I tell young bands when they ask us, like, don’t put everything into the internet, go out and perform. That’s where you fucking grow as musicians and as a band.” Thor added; “It’s completely different playing in rehearsal and playing them onstage.”

Following on, Arnor described what their ambitions were for the future; “We want to tour as much as possible, and new territories. We haven’t toured in the States, Australia, or Japan at all. There’s many other places we want to tour. But it’s either that or work full force on the new album. New stuff. We just want to stay busy, go with the flow. Tour or write music. That’s the plan…and conquer the world!” he says, with an evil laugh.

Winding down, I couldn’t have been happier to have met the band. From what began with me running in the rain, declaring my love for their set to a then-unacquainted Thor backstage, came an interview of joy. Their passion and dedication didn’t come as any surprise, as Arnor eloquently put: “The most wonderful thing about this band is to be able to create – and especially create something beautiful out of negative emotions. That’s the most beautiful thing, and I think that there’s no better tribute to people you’ve lost or emotions that are difficult to deal with. That’s the most important thing about Agent Fresco for me, that’s to be able to create something that I find incredibly important and unique with three other fantastic guys.”

Thanks to the band for their time. Check out Agent Fresco on Facebook and Bandcamp.