Science has often been an explosive field, from the discovery of gunpowder through the Manhattan Project and the A-bomb. But I wager it has never sounded so aggressive as it does when blasted through the amps of Colorado’s loudest sons, Allegaeon. Their fourth album Proponent for Sentience is almost entirely devoted to science. Mixing hope and misanthropy in their lyrics – and expertly-composed orchestral and choral lines with their music – they have delivered an absolutely crushing record.

Before getting into the album as a whole, it is worth discussing their new vocalist. It was with sadness that original vocalist Ezra Haynes stepped down in 2015 to focus on other projects. His rich bellows formed such a key part of Allegaeon’s sound at that point that it felt as if no other vocalist could do the job justice. Happily, his replacement in the form of Sons of Aurelius frontman Riley McShane fits in seamlessly with the band and, in places, sounds very similar to Haynes. Any trepidation about the new singer is immediately blown away on hearing the opener, and even his clean vocals on songs like ‘Cognitive Connotations’ work well with the band who have, hitherto, eschewed clean singing.

The core of Proponent for Sentience is a trilogy of songs: ‘I – The Conception’, ‘II – The Algorithm’, and ‘III – the Extermination’. The story is rather interesting, as it explores the evolution of robotics from the beginning in ‘I – The Conception’ through the implementation of Isaac Asimov’s Three Laws and how they impact robots in ‘II – The Algorithm’ and the unpleasant end result of the singularity in ‘III – The Extermination’.[1] Beyond the misanthropic lyrics, Allegaeon push their own personal envelope on the trilogy by using an orchestra and choir to augment the melodic lines. Elegantly crafted by guitarist Greg Burgess, they serve to make the trilogy stand out, especially ‘III – The Extermination’. On its preview on their Bandcamp, I was pleasantly surprised to hear uncharacteristic clean vocals on the trilogy’s closer, but they are a guest appearance by Björn Strid of Soilwork, and serve to give the song an extra emotional edge. With the orchestral and choral lines woven in, the song is the crowning glory of the album, packing a brutal, emotive, and beautifully melodic punch. 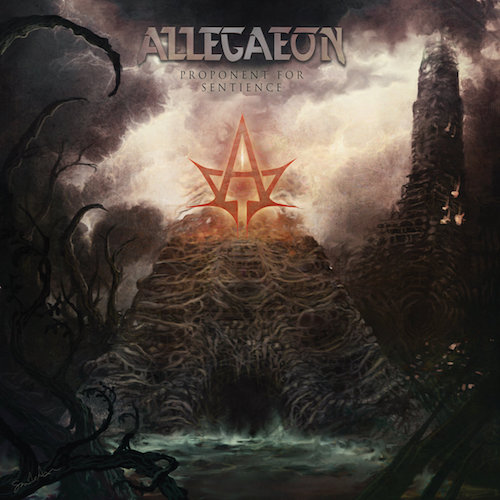 However, the album is not all misanthropic cybernetic stories and death metal symphonies in the vein of Arsis and Bloodshot Dawn. Outside of the songs augmented by orchestras and choirs, the rest of the album showcases the band’s strongest playing yet. ‘Of Mind and Matrix’ opens with a gorgeous melodic line, which is revisited throughout and used very effectively as a potent climax, while its lyrics focus on the story of a robotic being achieving consciousness, and becoming essentially alive. This ties it in neatly with the album’s general theme of the interaction between sentience and sapience. Bjorn Strid’s clean vocals may add depth to ‘III – The Extermination’, but new vocalist Riley McShane can also deliver emotive clean vocals as well as death growls, demonstrating them with great effect on ‘Cognitive Computations.’

A lighter tone appears in the form of the tongue-in-cheek number ‘All Hail Science’. Beginning with Tuvan throat-singing that would give Tengger Cavalry pause, this is a bit of a kooky song. The title is bellowed emphatically at the listener in the chorus “All hail/All hail knowledge; All hail/All hail science”, and while the song name-drops Carl Sagan of ‘Cosmos’ and ‘Pale Blue Dot’ fame, it references Bill Nye The Science Guy in the same breath: “The greater minds of modern science, from Carl Sagan to Bill Nye.” Personally, I cannot wait to see him to join the group onstage. Elsewhere, the imperatives of any scientific experiment, research, analyse, and observe, are screamed with more emphasis than even the most obsessive teacher can imbue them. ‘All Hail Science’ is definitely the comic relief of the album, but the chorus neatly sums up their continued obsession with science, which started on Fragments of Form and Function with ‘Accelerated Evolution’ and has continued on the other albums, notably on Elements of the Infinite with and ‘1.618’ (I recommend not taking this music video too seriously).[2]

This brilliance is somewhat waylaid, however, by the album’s closer, a cover of ‘Subdivisions’ by Rush.[3] As Burgess indicates in an interview, covers are always a tricky negotiation, especially when covering a band as notable as Rush: not only do they have to be good, the cover band has to make it their own and bring something new to the table.[4] Allegaeon succeed in making a famous progressive rock track a melodic death metal song, and replacing the synth with crunching guitars, but it’s somewhat overwrought. The choir and new vocalist Riley McShane’s voice do lend a more emotive edge to Rush’s paean to socially outcast nerds (who might have made the sentient robots focussed on elsewhere), but ultimately it feels like an unnecessary addition at the end. It’s an interesting and well-done cover, but to use it as the album’s actual closer after the magnificence of ‘III – The Extermination’ feels a mis-step. It may have been better delivered as a bonus track instead, since it doesn’t quite fit with the rest of the album.

This is the only flaw of the record, however, as the rest showcases the consummate evolution and maturation of their sound. One of Allegaeon’s more unique offerings is Burgess’ acoustic solos, and his best playing to date is demonstrated here on ‘Gray Matter Mechanics – Appassionata Ex Machinea’. Throughout the 8-minute symphony of destruction, his skilful playing is neatly balanced against the blast of death metal. As the song closes on a beautiful Spanish-style solo, it’s clear why the song is named ‘Appassionata’: the music is imbued with incredible passion from both Burgess himself, and the rest of the band.[5]

To sum up, Proponent for Sentience is the crowning glory of Allegaeon’s career to date. It would be criminal if this doesn’t propel them into a well-deserved spotlight, and I eagerly await their world tour with Bill Nye.

Footnotes
1. The Three Laws
2. ‘Accelerated Evolution’ (“Who could foresee when we crawled from the ocean/those who would stand upon these shores?/We evolve from primate to man/from man to god from gods to dust”) and ‘1.618’ (“Supreme equation from formation/the formula of 1.618/a pattern beyond man a blueprint of divinity”)
3. ‘Subdivisions’ – the Allegaeon version
4. Interview with Distorted Sound
5. Interview with the Moshville Times