An Endless Sporadic are an interesting affair. Formed as a collaborative jam project, the duo of Zack Kamins and Andy Gentile found success in having music featured in prominent video game titles Tony Hawk’s American Wasteland and Guitar Hero III: Legends of Rock. [1] The latter of these was particularly special as the erratic, high-spirited nature of the music provided a challenge for experienced players and was really unlike anything else in a rhythm game at the time. Following on from this, An Endless Sporadic’s notoriety allowed them to record a self-titled album in 2009 that added more beauty, dynamic turns of pace and a slathering of old-school progressive soundscapes to their wonderfully busy sound (not to mention The Flower Kings‘ Jonas Reignhold on bass). [2]

Almost seven years later, the project has reemerged in a big way. The sad departure of Gentile on drums is more than made up for in prog pedigree with Animals as Leaders’ Navene-K behind the kit, and the likes of Dream Theater’s Jordan Rudess among its guests. [3] Perhaps the biggest difference between An Endless Sporadic and the new Magic Machine, however, is Zach Kamins’ effortless backdrop of classical and unconventional instrumentation scoring. After all, ‘The Departure’ opens the album with Hans Zimmer levels of orchestral intensity before shooting off into the stratosphere mere moments later. 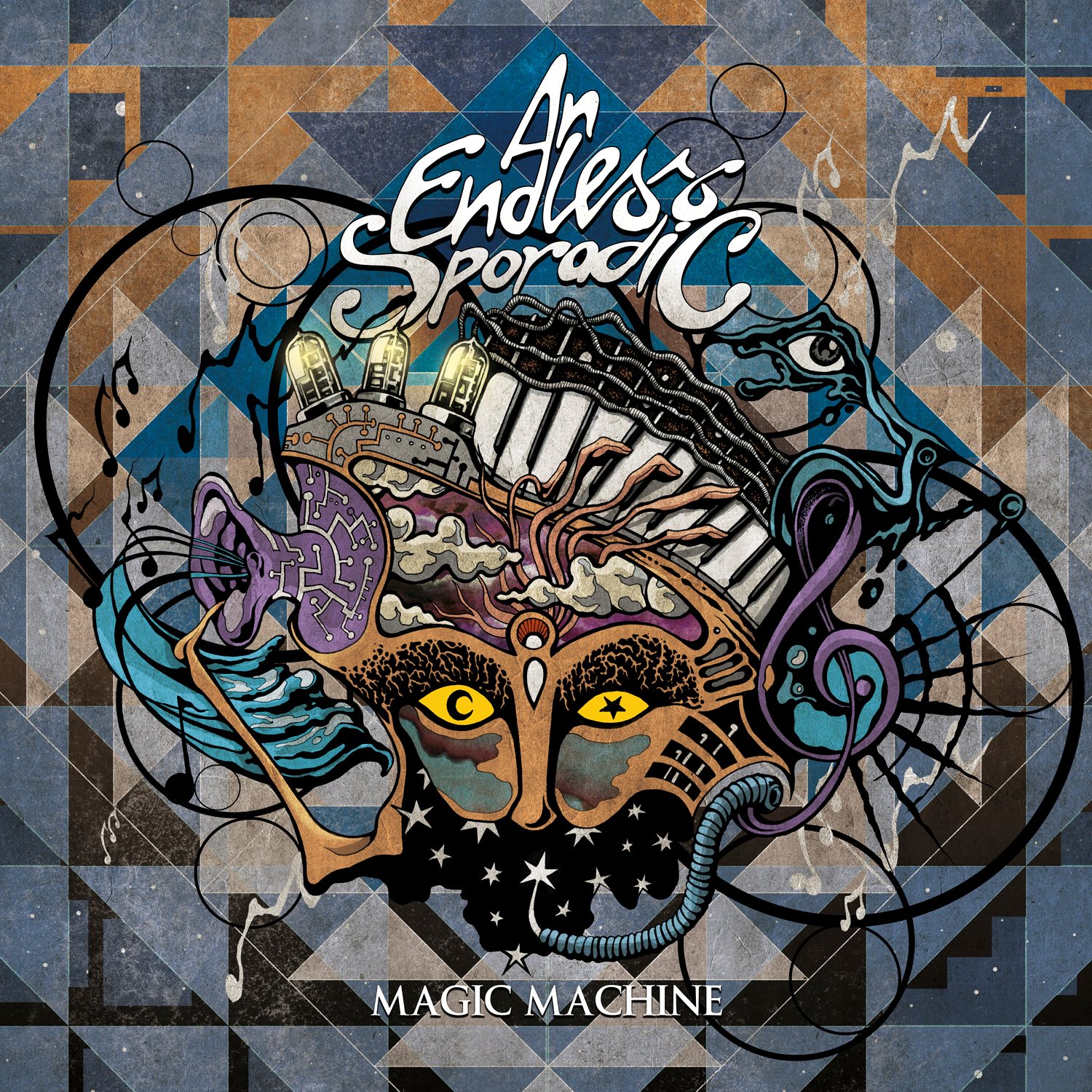 Staying true to their name, Kamins and company slide from luscious melody to juddering, off-kilter rhythmic device so fast your head will spin. There’s very little time for messing about; the new line-up sound like they’re on a mission to pulverise the senses in the most colourful way they can manage. The band’s self-titled album was impressive in its scope of ideas, but Magic Machine seamlessly outdoes it in every way. In fact, it feels at times that each track is its own battle for identity.

‘Finding The Falls’ is a particular stand-out; from choppy chugging opening to something with an air of minimalist 80’s pop to a gorgeously cautious flute solo and back again. Oh, and then a violin player joins the proceedings and offers a beautiful motif before totally losing their mind. If music be the food of love then there’s more flavour in each track of Magic Machine than your local buffet of choice, and An Endless Sporadic take great glee in force-feeding you their strange concoctions. For instance, the appropriately titled ‘The Assembly’ kicks off in a full brass intro conjuring images of tiny, marching woodland creatures.

Conversely, ‘Sky Run’ sounds like a sci-fi space cruise gone wrong. Featuring in this song are the kind of synth leads you would expect out of progressive titans of the by-gone era such as Emerson, Lake and Palmer but Magic Machine is less of a celebration of the past than its predecessor. There are similarities that can be made to modern bands like Chon and even Periphery in the way that An Endless Sporadic joyfully flip back and forth through unusual time signatures and chord progressions. Navene-K is a fitting choice for a replacement drummer – perhaps the most comparable band to An Endless Sporadic are Animals as Leaders, albeit with far less down-tuned brutality and much more playful adventurousness. The point is, Magic Machine could be taken out on tour to support Pink Floyd just as easily as TesseracT.

There are a couple of flaws in the mix, however. At times this Pandora’s Box of ideas drowns out the rhythm section and the quality and quantity of drum playing seems rather subdued next to rest of the wonderful cacophony. This is a particularly strange gripe to have because all of the other moving pieces of songs like ‘Galactic Tactic’ are so specifically produced and placed aurally. Guitars, bass, keys and everything in between is incredibly well-balanced considering how suddenly tones can change and morph that it’s a little distracting to find Navene-K’s input with the sticks so downplayed.

The reimagining of the song that got them their first real bout of attention in ‘Impulse II’ is a fun little piece of fan service but, and as much as it’s one of my favourite instrumental rock songs ever, following the previous forty-five minutes it seems like a much tamer affair. Even the orchestral flair doesn’t stop it from standing out like a sore thumb. If nothing else, however, this can be taken as proof positive of the leaps and bounds An Endless Sporadic have made in their career.

The Berklee-educated mastermind Kamins takes centre stage as the star of the show in Magic Machine and he’s as happy to be there as we are here to have him. For every piece of drama there’s an equal level of joy; the kind of joy you only get from the intense love for crafting these kinds of highly sophisticated musical dioramas. Magic Machine is truly Kamins finest hour and, for An Endless Sporadic and their peers, represents an extremely high benchmark of quality.