Trending
You are at:Home»Reviews»Metal»Anuryzm – All Is Not For All
By Nick Dunn on September 30, 2015 Metal, Reviews
Band: Anuryzm
Album: All Is Not For All
Record label: Melodic Revolution
Release date: June 15th, 2014
Website & Facebook
Purchase/Download
Tracklisting:
1. Mineral
2. Full Agonist
3. Humanoid
4. Depolarized
5. The Challenger

Second albums are infamously tricky to pull off well. [1] Sadly, progressive melo-thrash quintet Anuryzm seem to have fallen at this particular hurdle: All Is Not For All lacks the defiant punch of their thrashier, more aggressive début Worm’s Eye View, and fails to capitalise on the potential it promised. That’s not to say it’s a bad album per se, merely that there is a lot to work on for the third album. Their first grabbed listeners by the lapels with furious riffs, impressive vocal snarls, and sumptuous synth sections; this time round, All Is Not For All feels more a hodge-podge of styles.

The style that permeates this album draws heavily from Symphony X – logical, given it’s bassist Michael LePond’s regular band – undercut with the darker side of Opeth. Case in point, the brooding and atmospheric opening of the title track, which features a synthetic orchestra courtesy of guest-star Textures’ keyboard maestro Uri Dijk underneath a moody guitar riff. On a dime, this turns into what could have been an Opeth jamming session, with the guitars lifted from a Pale Communion B-side. This reveals the main problem with All Is Not For All: Anuryzm don’t just wear their influences on their sleeves, the influences are the entirety of their sound on this album.

It’s no bad thing to admit your influences, or even pay homage to them by adding your own twist, but to essentially mash their sounds together comes across as lazy. The best bands will take what makes their influences great, and merge them into something new, or at least something coherent. Furthermore, while Nadeem Bibby’s range is impressive – veering from growls through hard rock snarl to soaring power metal highs on every song – it indicates a need to pick a style and stick to it. His hard rock snarl is arguably his best, and though he can hit the high notes when singing cleanly, he lacks the power to give them the weight they need. A strong command of various styles he may have, but Bibby needs to pick one style, two at most, and stick to them. 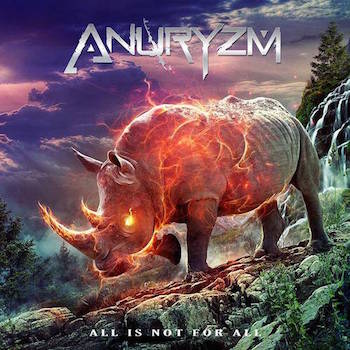 In an ironic twist, the album’s biggest talking point is its shortest song: ‘Oceans Apart’ is an all-too brief acoustic interlude with gorgeous cello accompaniment by none other than Christopher Chaplin, one the many sons of Charlie Chaplin. A shame it is, then, that the band squander Mr. Chaplin’s cello skills, allowing him only to accompany them rather than giving him the floor. When so much is made in the liner notes of his inclusion in the song, it seems odd that he should only be allowed a brief hook that is itself overshadowed by the bass and drums.

However, for all its failings there are still plenty of gems for prog fans here. Opener ‘Mineral’ is a quiet, slow buildup to ‘Full Agonist’, which kicks in with a punchy guitar riff that grabs the listener’s attention and does not let go. The song rollicks along, with Bibby showing off his full vocal range. At 4 minutes in, everything is stripped back to make way for a brief guitar interlude, after which the bass kicks in like a revving motorbike to build up to the dramatic climax. The intros of Anuryzm’s songs form the album’s true highlights, each one different and equally attention-grabbing. ‘Impermanence’ and ‘The Challenger’ demonstrate some interesting riffs, though the opening of single ‘Humanoid’ is the album’s best: a stomping hook that throws the listener headfirst into an imaginative song about how humanity has lost sight of what it means to be human.

The lyrics, poetic and thought-provoking, are another redeeming feature of the album. On ‘Humanoid’, for example, listeners are told that “seek to acquire is what conspires”, i.e. our gluttonous greed has conspired against us and thus we are ‘humanoid’ instead of actively human. This is clearly an expansion of the concept of the album’s title, explained on the album’s website as the notion that not everyone can handle everything, and suggests not that we should simply be content with our lot, but that unchecked greed works against us. [2] Meanwhile, “streaks of mold paint the portal door” that allows access to the upper echelons of society in ‘Depolarised’, implying that even the doorway to that society is corrupt and tainted.

Ultimately, All Is Not For All is an interesting if flawed second album: intriguing lyrics, a vocalist with a strong command of differing styles, and good riffs demonstrate a potential which Anuryzm clearly have the talent to nurture. However, to build on the strong statement that was their début, they need to stop copying their influences and learn from them instead, figure out what makes them great, and put that to greater use in carving out their own niche.

Footnotes
1. WhatCulture and The Guardian have examples.
2. Anuryzm’s Bandcamp page