As well as making a lot of well-regarded music within punk and metal, Sweden has something of a reputation when it comes to open-mindedness among younger generations. Part of the reason why such classic genres have emerged from this country has been its musicians’ desires to marry previously unexplored genres, or approach well-trodden ground in a new light.[1] Fusions of punk and metal are certainly nothing novel to either genre, but rarely has it sounded so immediately catchy as with Atlas Losing Grip, a group who weave 2000s punk rock with threads of NWOBHM and thrash metal. The result is a catch for both sides: there’s the frenetic energy and attitude of the former, the burly muscle and soaring guitar leads of the latter, and both genres’ propensity for one helluva catchy chorus. Currents has all of the above in spades.

‘Sinking Ship’ gets off on the perfect foot: after waves lapping against the shore slip into a heavy metal intro of singing guitar melodies and Metallica-style thrash, it’s not long before Rodrigo Alfaro exclaims “All aboard this sinking ship!” in his distinctive American-tinged tenor, and the magic of Swedish choruses sets in. Like most of the choruses on this record, this section manages to ingrain deeply into the skull, and the brain has already learned it by the time it repeats. It happens again and again: almost every track has this anchor-like chorus that hooks in on first listen, whether in ‘The Curse’ or ‘Cast Anchor’. 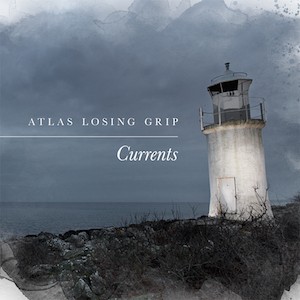 Speaking of anchors, that’s another point that Currents has going for it: a continuous lyrical thread related to a nautical journey, metaphorical as well as physical. ‘Cast Anchor’, ‘Unknown Waters’, ‘Downwind’: you get the picture. More miraculously, the analogy rarely becomes tired, even in the 11-minute monster ‘Ithaka’ that rises up at the end, and drifts back into seaside noises. However, the track that hits the hardest lyrically is ‘The End’ which has nothing to do with ships. Instead, it’s a frank and heartfelt look at depression and its devastating effects, with Alfaro adopting some hardcore shouts to counterbalance the smooth singing.

“I try to find what you call happiness/Is it too much to ask, too much to demand/That even I might someday get to know that feeling/Before it’s time to greet our friend with a scythe in his hands”
[Atlas Losing Grip – The End]

Atlas Losing Grip’s influences look like the world’s most confused battle jacket: Metallica patches sit next to Rise Against, Strung Out next to Iron Maiden, Propagandhi and Bad Religion do battle with Trivium and Thin Lizzy. Technical melodies separate the band from their contemporaries in punk, and the indescribably punk rhythms from their metallic influences. The record is a musical tug-of-war, if you will, and where your musical preferences lie will most likely dictate which songs stick out most.

One could argue the metal side wins: the album’s duration amounts to sixty six minute and six seconds: however, the downside of this is that a couple of tracks could easily have been dropped. ‘Unknown Waters’ stretches the playful mid-tempo formula one time too far, and acoustic ballad ‘Closure’ riffs a little too close on Rise Against’s ‘Swing Life Away’, while also being bested later on by the cinematic ballad ‘Cold Dirt’. Even the ‘Ithaka’ juggernaut requires a little bit of a trim, especially the lengthy fadeout after an acoustic coda.

Its flaws aside, Currents is an extremely well-crafted album from a band who have carved their niche well. The instrumental side has much to love in its ambition, although Alfaro is certainly the ‘Cynosure’.[2] His vocals slot in perfectly into the music, and it will be interesting to see how new face Niklas Ohlsson, who joined just recently,[3] handles them. For now, enjoy this hour of punk rock power from Atlas Losing Grip, another fine export from Sweden.

Footnotes:
1. See the Gothenburg-style melodeath (which married NWOBHM with death metal) of In Flames and Dark Tranquillity, or Refused’s mind-bending take on punk, for just two examples.
2. Cynosure: def. ‘a person or thing that is the centre of attention or admiration.’
3. YouTube announcement of new vocalist Niklas Olsson.