Trending
You are at:Home»Interviews»Avatarium: “We have a little more sunlight coming in between the dark clouds on this album.”
By George Parr on July 10, 2017 Interviews

Founded by Swedish doom pioneer Leif Edling of Candlemass, Avatarium’s biggest asset has arguably always been their ability to retain Edling’s penchant for huge doom riffs and epic soundscapes but with a more atmospheric edge – on third album Hurricanes and Halos, the latter takes an even larger role. Edling taking a step back from the project risked having a detrimental effect, but in reality, Avatarium have created perhaps their best work yet despite it. This time around, Edling has adopted the unique role of ‘creative overseer,’ with the songwriting duties of husband-and-wife duo Marcus Jidell (guitarist/producer) and Jennie-Ann Smith (vocals) being stepped up. Given that Smith’s sonorous vocals have always been one of the sources of the band’s more atmospherically-inclined sound, it follows suit that the album steps up this side of the band. To get a better understanding of how Edling’s new role affected the release – and how the five-piece forged Hurricanes and Halos – we spoke to Jidell following its release.

“Leif wrote six songs on the album,” explains Jidell, “and he also had a lot of idea about how the entire release should be feeling-wise.” For recording, bassist Mats Rydström overtook Edling’s role, and Jidell admits that “my style, as a producer, is to bring out everybody’s personalities, and since Leif is not performing on the album, things sound different.” However, Edling’s inspiration on the release is still clear. As Jidell notes: “I think that even if Leif didn’t write one song on an Avatarium album, you will always feel his soul there. He is the one who came up with the concept and I have learned a lot from him, I’m very thankful for that.” Whilst you may expect that the crushing doom metal side is where his input rings most clear, Jidell is quick to note that “it was actually Leif who wanted us to go even deeper into the Uriah Heep and Deep Purple soundscapes,” though he adds that “I guess one of the reasons might be him knowing my deep love for both these bands.”

Perhaps most important to Hurricanes and Halos is the combined effort shown by each of the band’s members. “A lot of the arrangement work was made by me, Jennie-Ann, Mats and Lars [Sköld, drummer] in the rehearsal studio,” Jidell adds, “and I really think that you can hear that this album is very much a band effort.” 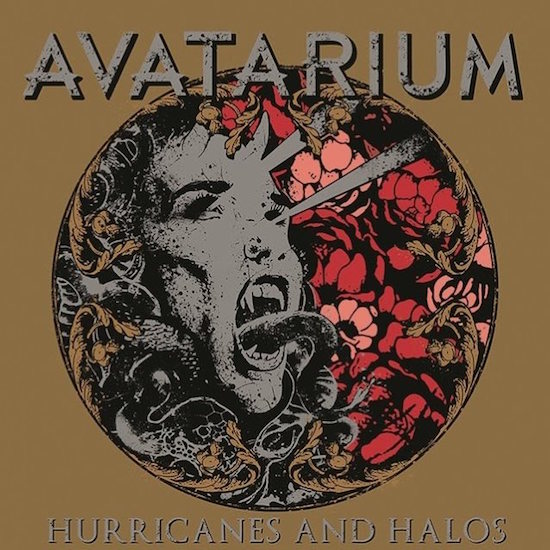 As a married couple, Jidell feels he and Smith “can connect on some different levels since we know each other so well,” but Jidell also makes clear that “the thing with Jennie-Ann is that she is the greatest singer I have ever worked with, and at the end of the day, that is what counts when doing music.” Together, the duo have always played a large role in the song arrangements, “I think that is a big part of the Avatarium sound,” says Jidell. However, he also notes that Rydström’s bass playing had a “big impact on the sound”, and that after Rickard Nilsson joined as organist it “became very natural to keep on adding organ sounds since he is such an amazing player.” The input of each member is clear on the release – it marks a continuation, but also an improvement, of the style seen on the band’s previous efforts.

Ever important to Avatarium is a mix of darkness and light. Here, this means a merging of aggressive metallic power and a supernatural psychedelia that creates an album with scope beyond one-dimensional metal. “I would say that we are very interested in searching the dark corners of the human mind and soul,” says Jidell. “But there is also light and beauty in the world and that needs to be somewhere in the music as well. I think that we have a little more sunlight coming in between the dark clouds on this album.” Lyrically, this mix of light and dark shines through, but taking inspiration from current events, the band don’t shy away from political topics. “We are not a political band, but of course some of the lyrics can be interpreted like that,” Jidell clarifies. “Lyrics always have different meanings depending on who you ask and that is how it should be.” Having said that, though, Jidell admits that “We react to what we read and see around us, and of course we are affected by what’s going on in the world right now. There are a lot of people who want us to be scared, and it is crucial to remember what’s normal and what’s not. Maybe we can’t stop all the crazy people, but I think it’s very important to not get used to, and to not accept, terrorists and crazy right-wing politicians.”

As well as a mix of darkness and light, Hurricanes and Halos also merges a variety of musical styles. The album combines modern production with 70s rock vibes, psychedelia, gargantuan doom metal and even smatterings of folk and jazz, but rarely displays any seams. “Music to me is about pushing your limits and exploring new things as an artist and as a human being,” explains Jidell. “I am a different person today than when we released the first album so it wouldn’t make sense to do a copy of the old stuff.”

As such, the album boasts a commendable amount of well-executed experimentation, and individual songs highlight the myriad of styles. On ‘When Breath Takes To Air,’ folky jazz dominates proceedings, but the soulful nature of the song feels at home amongst the emotive landscape of the album, and just a minute later crunching riffs with scorching leads can take over without so much as a whiff of disjointedness. ‘The Starless Sleep’ balances a heavy energy with infectious choruses masterfully, and, elsewhere, ‘Road To Jerusalem’ strips back the heaviness, allowing jangly guitars to dominate slow-burning verses before the doom-laden ‘Medusa Child’ can introduce gargantuan riffs and a simple-but-effective chorus. “All these elements are a part of me and all of us in the band so I think it comes across very natural.” Jidell observes. “I would rather say that it has been a problem for me in other bands to not be able to blend in these influences in the way I wanted. With this band, we can do a lot of stuff other bands cannot, since everybody has a profound knowledge and passion for music.”

This knowledge and passion has led to what many believe is the band’s best effort to date. Experimental yet without abandoning what made Avatarium’s sound so enjoyable in the first place, Hurricanes and Halos sees Jidell and co. take another step up the ladder, proving them worthy of the “Up And Coming” award presented to them by the German Metal Hammer last year. Losing a metal legend from a lineup is no easy event to overcome, but with Edling’s guidance and mentorship, Avatarium have graduated from his school of doom.

Hurricanes and Halos is out now via Nuclear Blast. You can follow Avatarium on Facebook here and check out their website here. Thanks to Marcus Jidell for his time.