Deathcore is still a dirty word in metal circles. Long-time metal fans often scoff at the notion of a band mixing together death metal, hardcore and metalcore, and newer deathcore often gives off images of younger bands with throat tattoos, trying desperately to look tough. According to vocalist Bryce Lucian of deathcore band Seeker:

“Much like what became of metalcore in the mid-2000s, deathcore is an often maligned term that can instantly diminish a band’s credibility. What once conjured images of ridiculously brutal, unapologetically heavy bands like Ion Dissonance and The Red Chord now brings to mind bands full of twenty-year-olds sporting throat tattoos, matching black T-shirts, and trying desperately hard to look tough while they jump in sync onstage.” Bryce Lucian [1]

Lucian explains that whilst being associated with deathcore can be toxic, it really shouldn’t matter. He’s right. It doesn’t matter what people enjoy, and what’s wrong with a sound that mixes the breakdowns of metalcore with the crushing, brutal elements of death metal and hardcore? 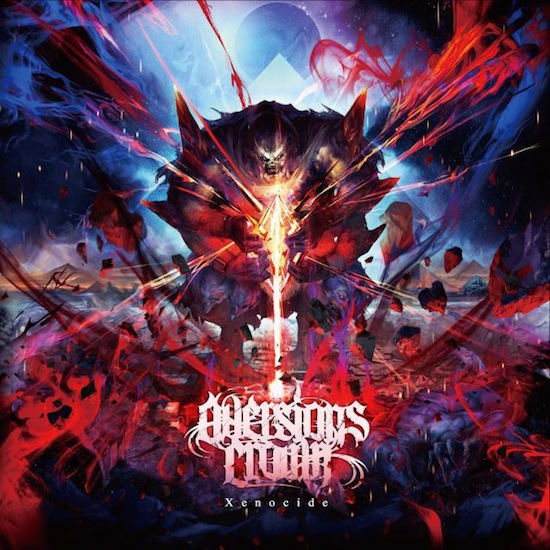 Enter Aversions Crown, hailing from Australia, who certainly aren’t held back by their association with the much-maligned genre. Their latest record, Xenocide, is brutal, demanding, and intense throughout. It rarely leaves you any time to catch your breath. It’s incredibly heavy throughout, on another level from other bands dubbed deathcore. Only the opening track, ‘Void’ lets you breath – the calm before the storm.

There’s no singing to be found, but Mark Poida’s death growls cover a lot of ground; his range is striking, and always alarmingly brutal – akin to the early era bands Lucian alluded to earlier. Xenocide deals with themes of religion and science – the term itself means the intentional eradication of a species. ‘Ophiophagy’, a track that showcases all of Mark’s range, tells us: “I detest the scriptures of creationism envisioning planetary systems inoculated with terraformation.” The lyrics throughout the record follow a similar vein, and cover ground that countless other metal bands have covered in the past, albeit in a denser, wordier approach. Xenocide tries to sound intellectual, but in the end comes across as pretentious in its verbosity.

However, the music has plenty to offer – for an album full of brutal riffs, double-bass pedals and vocals on the side of evil, there is plenty of musicality. It’s not particularly progressive stuff, but Chris Cougan’s guitar can float through a track as easily as it can crush it. His guitar playing suits the themes of the lyrics – the otherworldly nature that religion and space can conjure is captured with music that is as scary as it is technically accomplished. All band members perform admirably throughout Xenocide. The theme is so well thought out however that it falters in one element of execution – there is little difference from track to track. Each song is good, but you’ll have a hard time distinguishing many individual moments.

Xenocide is a good record, but its overall brutality will stay in your head longer than any individual track. You may well be taken aback by the almost venomous heaviness that Aversions Crown presents. It’s breathtaking. Sure, Xenocide contains elements and a few of the tropes of deathcore, but long-time death metal fans shouldn’t scoff at Aversions Crown’s latest. Look past the band’s ear gauges and matching black t-shirts, and you’ll find a brutal but interesting metal album.