In a display of unprecedented disregard for journalistic integrity, it was clear I would enjoy Balfor’s new album well before listening to it; perhaps to say I was judging a book by its cover would be a stretch, but I was definitely judging it by its nationality. Balfor, like many bands I enjoy (a list that includes the likes of Drudkh, Blood of Kingu and Rattenfänger) [1] hail from Ukraine, and while Balfor don’t sound quite like any of the previously mentioned bands, I am pleased to say that upon listening to Black Serpent Rising, their third full-length, my predisposition towards liking this band has been justified.

One of the aspects that has always drawn me to black metal is atmosphere – and an observation I find myself making more and more is how geography influences the atmosphere created. A typical example of this would be the stark, icy, bleakness characteristic of Scandinavian offerings. A number of bands from the British Isles – such as Winterfylleth, Old Corpse Road and Fen – all instil their compositions with memories of the rich, mist-shrouded, fey mythology of the region. The Eastern European bands whose output I most appreciate do the same – Drudkh and Negura Bunget, like Balfor do on this album, convey something of a ‘genetic memory’ in their music that hearkens to a simpler, if crueller, pastoral existence that is more in touch with nature than the one we experience today. What Balfor achieve, however, is the emphasis of the martial aspect of that existence – Black Serpent Rising immediately translates as a call to arms. In fact, if the themes tackled were more fantastic than historical, Balfor’s gloriously overblown sense of the epic could easily make them the Ukrainian equivalent of Bal-Sagoth.

From the very first spin, Balfor bring something refreshing to straight-up, guitar-drive blackened death metal, mostly in the form of multiple vocal approaches and some interesting rhythmic devices. The tribal chanting that closes ‘Heralds of the Fall’, accompanied by one sustained, fading guitar chord and minimal drum line typifies this – just one example of a great hook in an album full of ridiculously catchy moments. Other excellent vocal sections include the incorporation of choral passages that call Batushka to mind (such as on ‘Serpents of the Black Sun’ [2]) and the female performance on ‘Unbounded Wrath of Venom’ – contrasting beautifully with the powerful bass presence in the song. Then there are the gooseflesh-raising raw shouts that give way to the clearest singing on the album on ‘Among the Fallen Ones’. This section recalls the likes of Primordial in the ancient echoes of past glories it evokes. Throw in an unexpected, but searing lead straight after, and you’re left with my personal favourite on Black Serpent Rising. 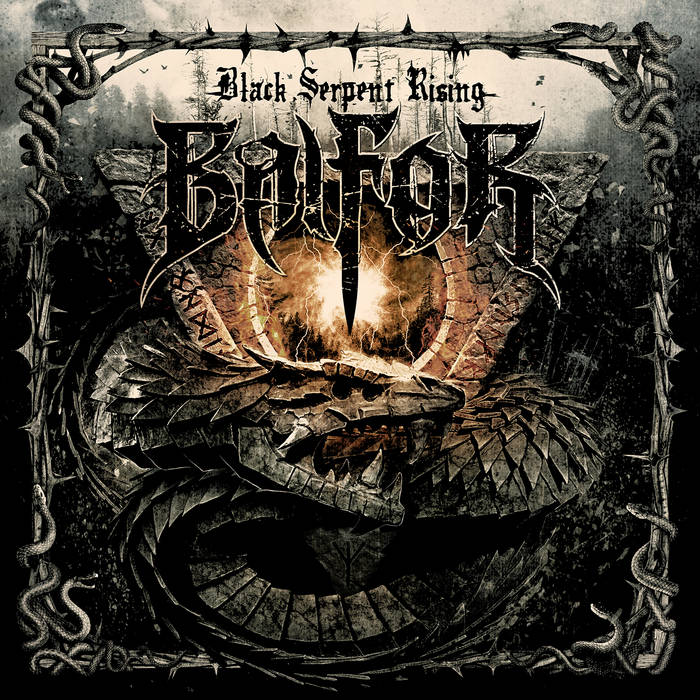 The second half of the album is characterised by a more melodic approach to composition – the introductory riffs on both ‘Wolfbreed’ and ‘A Vulture’s Spell’ both display great technicality, while the shifting tempos in both arrangements are more in keeping with melodeath than black metal [3]. Some small addition of keyboard-based atmosphere to reinforce clean singing passages (especially in the latter of the two songs) further emphasise this. Possibly the influence of Astaroth Merc (the multi-instrumentalist behind Raventale) on guitars could be the contributing factor behind this. Admittedly, the production and mastering aren’t quite what we expect from Finnish or Swedish melodeath, but the slight fuzz seems suitable for a band as rough-and-ready as Balfor.

The predominant response I have to Black Serpent Rising after repeated listenings is positive: its tribal, martial tone puts fire in my blood, which, combined with its blackened approach, recalls the golden days of Immortal [4]. So Balfor may be standing on the shoulders of others in many respects, but they are doing so proudly and respectfully. Their own press release defines their sound as ‘Barbaric Black Metal’ [5] – and while I may personally be getting tired of sub-sub-genres, this one seems apt. Balfor’s music evokes images of rampaging hordes, fuelled by a mythos most of us will never understand, and they do it with style.

1. The band is built around members of other stalwarts within the Ukrainian scene, representing Khors, Raventale and Hate Forest among its current lineup.
2. A video for this single, chock-full of fire, corpsepaint, warriors engaged in mortal combat and mysterious hooded figures can be viewed here.
3. It is for this reason specifically that I regularly sing the praises of Galder’s Old Mans Child – a highly underrated act, in my opinion.
4. Prior releases, especially Barbaric Blood, are even more Immortal-esque: the guitar tone, Thorgeir’s vocal performance and the styling of riffs all spoke of pure Abbath worship.
5. Barbarian Worms (a review of their latest album, Worms, can be read here) fall into a very similar thematic category, even if their music moves in a different direction.