Spanish black/doom band Barbarian Swords aren’t interested in making music for the listener to enjoy. Theirs is of the utmost nihilism, uncaring for your comfort or tastes. Their second record Worms may clock in at over 71 minutes, but the feelings of dirt and disgust it creates will linger for far longer, festering away like an infected wound. If you’re looking for something dark, heavy, that will take you far out of your comfort zone, then Worms may well appeal; this is amoral, violent, and utterly blasphemous.

A cursory glance at the song titles and artwork gives a perfect indication of what awaits. Though the music shifts between the hatred of black metal and the tempos of funeral doom, the intention and ideology is much more in line with bestial and war metal – utter hatred and spite towards everyone and everything. Whilst the lyrical content of Barbarian Swords is comparable to the likes of Blasphemy, Archgoat, and Revenge – legends in the war metal scene – the musical approach is very different. All the songs bar two are over six minutes long, with ‘Requiem’ at almost eighteen minutes in length. This gives the songs enough time to either create a hypnotic, suffocating atmosphere, as exemplified by the utter blackness of ‘Total Nihilism’, or to move through different sections, as opener ‘I’m Your Demise’ does, with greater separation of its black metal and doom metal components. The music has a real weight and power to it, and the vocals on Worms are, without exception, filled with hate and danger. Barbarian Swords also throw some extra variety in to their sound with ‘Carnivorous Pussy’, which is practically a black-thrash song that’s one guitar solo away from being able to fit on to an Abigail record [1] (overlooking the very different vocals and production, of course). 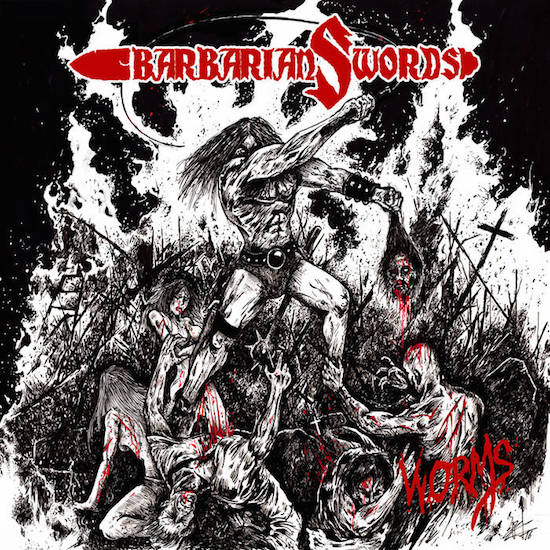 When the album connects, it’s a stunning piece of blackened nihilism. The ominous aura of ‘Pure Demonology’ is crushingly intense, switching from black metal rage to moments of slow, ritualistic horror with almost no warning. Elsewhere, ‘Christian Worms’ is as good a seven-and-a-half minutes of anti-religious blackened doom as you could hope to find. The end of the album does drag, though; the funeral doom of ‘Requiem’ and ‘Ultrasado Bloodbath’ could both do with some editing, especially following the furious speed of ‘Carnivorous Pussy’.

Speaking of these song titles, it must be highlighted how uncomfortable some of these tracks are – and not always in the soul-destroying manner of most blackened doom. The lyrics of ‘The Last Virgin On The Earth, Sodomized’ and ‘Carnivorous Pussy’ are – unsurprisingly – perverse and crass in the extreme, [2] and it’s safe to say it will probably turn some listeners away from Worms. That said, given the nihilism expressed in the record towards everyone and everything, I doubt Barbarian Swords care.

This isn’t music that cares what you think or feel; it is pure, unfiltered hatred set to music, without any consideration for ethics or politics. If you’re OK with that, then Worms has plenty to offer fans of blackened doom.