German power metal legends Blind Guardian have made fans wait just under five full years for a follow-up to 2010’s At The Edge Of Time. With three full choirs and two orchestras providing a symphonic backing worthy of the best classical composers and a thrilling dark fantasy story, it was well worth the wait. Their mix of speed and power metal has mellowed across their career, and mixing it with symphonic and choral backing is a masterstroke, making Beyond The Red Mirror one of their strongest albums yet.

Conceptually, Beyond The Red Mirror is a sequel to the story told at the end of 1995’s Imaginations From The Other Side, telling the tale of two worlds separated by a red mirror, and the effects of a decision made after ‘And The Story Ends.’ As is often the case with concept albums, one does not have to be involved in the story to enjoy the album, but it does help. In an interview with Terrorizer magazine, singer Hansi Kürsch explains more:

“I just started brainstorming what could have happeend to the boy [at the end of Imaginations…], and I finally decided that he change his mind and did not dare to jump because he was too afraid. Due to this decision, fatal consequences occur in both dimensions, turning into places of decay. The album can be seen as a quest for a holy grail, how to forge decisions.” [1]

Lyrically, this fantasy/sci-fi epic makes the album darker than its predecessors, with statements like “There is no real salvation/ We’ll wipe them out/ And nothing remains here” in opener ‘The Ninth Wave’. The story follows on from there, with a “Chosen One” eventually saving both dimensions from evil by rescuing the Holy Grail. It is, as Kürsch points out, an updated version of the British legend of King Arthur. The Chosen One is named as Arthur in a prologue contained in the lyric booklet, and the villain, or The Fallen Son, is Mordred. Arthur crosses from Utopia into Discordia, the land beyond The Red Mirror, populated with mysterious gods and a crow who seems to act as a general narrator. Arthur rescues the Holy Grail, and in doing so, manages to vanquish Mordred, thus saving Utopia. What the consequences will be, however, are mysterious, and left to the listener’s imagination.

This story brings a darker edge to the music as well, and the two are largely as epic as each other, save for a couple of musical mis-steps here and there. The two orchestras have been put to very good use on this album, particularly on ‘At The Edge of Time’, ‘The Holy Grail’ and ‘Grand Parade’. ‘At The Edge of Time’ has a particularly rousing melody to it, with a catchy string motif woven through it. In fact, I will go so far as to claim ‘At The Edge of Time’ is the album’s best song: it perfectly balances the choirs and orchestras with the guitars in a brilliantly triumphant anthem.

The three choirs are as impressive as one would expect, particularly on ‘The Ninth Wave’, ‘The Holy Grail’, and ‘The Throne’. However, they feel somewhat neglected across the album as a whole. To have used them on every song would have been excessive, but to restrict them to ‘oohs’ and ‘aahs’ on most of the songs makes using several choirs seem pointless where one would have sufficed. On top of this, the oft-used faux-choral layering of Hansi Kürsch’s voice further renders the choirs pointless: Why rely on an old mock-choral effect when there are three choirs with a full complement of male vocalists to hand? It works for piano ballad ‘Miracle Machine’, which sounds like something Queen might have been proud of, but I feel that the choirs could have been used more effectively. It would have been very interesting to hear Kursch’s voice, which has lost none of the power it had on Imaginations…, buoyed by male voice choirs instead of echoes and layers of his own voice. 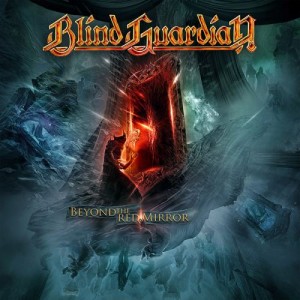 Talking of power, opener ‘The Ninth Wave’ lacks it. I initially thought this was a bad thing, especially when ‘Sacred Worlds’ was such a strong opener for At The Edge Of Time. Having let the album grow on me through repeated listens, however, I have revised my opinion. The orchestral and choral arrangements are very compelling, and I definitely want to see more of this in future albums. The song begins with the choir singing in Latin of “Discordia” and “Utopia”, the two worlds on either side of the titular ‘Red Mirror’, and the orchestration slowly builds from there. Immediately an atmosphere of dark mystery has been conjured, which fits the story of the album neatly. The drums and the guitars kick in after about a minute, and Hansi’s voice joins to add to the build up. While there is no powerful climax to this build up like there was on ‘Sacred Worlds’, there doesn’t need to be one. The atmosphere created by that build-up is better served without one, which piques the listener’s interest immediately. Along with the masterful symphonic arrangements, interesting hooks from guitarists Andre Olbrich and Marcus Siepen, and a rousing chorus, it’s a very strong opener.

If there’s one last musical criticism to make, it’s that Beyond The Red Mirror doesn’t quite hit the balance it really needs between the symphonic works and the heavy guitars. ‘At The Edge of Time’ does, and it’s songs like this, ‘The Holy Grail’, and ‘The Throne’, that give the album its most well-balanced songs, but a better general balance between the two sections would have made the album a triumph as a whole. Closer ‘Grand Parade’ may live up to its name, although I disagree with Olbrich’s statement that it’s their best song ever.[2] It’s certainly majestic, and definitely one of their best, but not quite the best. I feel that that pinnacle is yet to be reached, though I’d be willing to listen to any arguments readers might have for it coming from the pre-existing discography. [‘And Then There Was Silence’ I reckon may be their best song – Ed.]

I may have picked up on several flaws in the album, but that doesn’t stop Beyond The Red Mirror being a triumphant addition to the Blind Guardian discography. The choral arrangements, where allowed to shine through on songs like ‘The Ninth Wave’ or ‘The Holy Grail’, really do shine, and the same must be said of the orchestras. Their arrangements are truly great, and mix well with the guitars, making for some of the best symphonic power metal I’ve ever heard. Mixing this with an intriguing story makes for a great album that may not quite be greater than the sum of its parts, but is still a joy to listen to, and I would even go so far as to say it’s a contender for Album of the Year.