Trending
You are at:Home»Interviews»Blood Youth: “What I love about playing in other parts of Europe is just how thankful they are.”
By Joshua Hall on September 23, 2015 Interviews

Temporarily detaching myself from the madness at Leeds’ hardcore festival Ghostfest [report here], I wandered over to the press area to have a quick chat with metalcore/hardcore act Blood Youth. Borrowing members from the recently deceased Climates, the five-piece have been making serious progress through startling record sales of their first EP and surprising live sets including a recent tour with Architects. Joining me were Kaya Tarsus (vocals) and Chris Pritchard (guitar).

BA: How did you find your set today?
Chris: It was really sick. The stage we played on also wasn’t on at all the other Ghostfests.
Kaya: Yeah, I wasn’t expecting that stage, but it was awesome. Loads of people knew the words. Our EP only came out two, three months ago, so it’s quite a new release. It was much better than we were expecting.

BA: And was this your first time playing here as well?
Chris: That was our first show in Leeds.
Kaya: Me and Chris live in a town near here called Harrogate, so we’ve known about Ghostfest for ages, and we used to go every time.
Chris: This is like a hometown show for us.

BA: And who have you seen today, and who have you enjoyed?
Kaya: Saw a bit of Malevolence…
Chris: We caught a couple of their songs. Saw some of Casey and they were really good. But straight after our set we had to pack down. Then we had to go straight out to eat food and we’ve only just come back now.
Kaya: But we wanna watch Stray [From The Path]. Hopefully we’ll catch Hatebreed…
Chris: Absolutely.
Kaya: I don’t know what the plan is but I’m sure we’ll get to see them. We’ll see who we can see tomorrow [in Bristol].

BA: You’ve also just come off tour with Architects; how did you find that?
Kaya: It was awesome. Every show was sold out.
Chris: We were only on tour three days, and then we played Destruction Derby which they were on as well.
Kaya: They were all awesome guys, really welcomed us in. Gave us a shout-out every show.
Chris: We definitely want to play with them again.

BA: With Architects being such a huge name, do you find that despite only playing with them a few days, they’ve helped you as both musicians and as a band?
Chris: Me and Sam [Bowden], our other guitarist, we just learn loads from keeping our eyes on the guitar work. You listen to their albums and you hear the noises and you think ‘how do they do that?’, and to see them live it all comes into a bit more clarity. It’s just good to see just how they do things.
Kaya: And just as people they’re awesome. No ego or anything like that. They’re one of the biggest bands in the world and they’re just chill. Like we’d sit down and eat dinner with them every night.

BA: Having been on a European tour, has there been a difference playing your shows out in Europe than when you’re playing the UK? How is the hardcore scene different?
Chris: The hardcore scene is kind of drowned out in most European scenes. But back in the UK it’s growing into less of that now.
Kaya: It’s always changing in the UK. But what I love about playing in other parts of Europe is just how thankful they are.
Chris: They’re almost too grateful.
Kaya: Like we played in Bordeaux and people were like “nobody plays here, this is awesome.”

BA: I was talking to Blacklisters [interview here] about the differences with touring Europe. There’s a huge change between playing a hometown show like Leeds and playing somewhere like the north of France…
Chris: Leeds has an awesome scene, yet for some reason Leeds has never been on one of our UK tours, and we never know why.
Kaya: We’ve been going to shows in Leeds since we were 13 years old and it’s always been so sick. But when we played a free show in Germany, just us, there were loads of people who had never heard of us before who just came to see us. And people bought loads of merch just to support us and it was awesome. The attitude is so good. And I mean it’s good in the UK, and it’s good to play up and down the country. We played a show in Chester and we were like “does Chester even have a scene?”, and it was one of the craziest shows ever. I went to hospital after that…
BA: How come you went to hospital?
Chris: He got bumped on the head. [laughs]
Kaya: Yeah it was just getting really wild. I had to check if I had a concussion or something.

BA: Let’s talk the new EP. It came out around 2-3 months ago – how’s the reception for that been?
Chris: Every show we’ve played since its release, we’ve seen a really organic growth. We’ve got a few lines in the EP that we’ve just thought “this’d be sick if we just got the crowd to sing this all together.” And with today’s crowd, they were just so loud.
Kaya: Yeah this was definitely the first show we’ve played where the crowd has been louder than the music. It’s so good. It’s just one of those EPs were people go out to learn every word. Especially ‘Failure’.

BA: With ‘Failure’, you did a music video for that. And on Facebook you were asking people what other videos you were thinking of doing… is there another video in the works?
Kaya: It’s something we’re talking about. We’re currently writing for our next release.
Chris: Well, it’s written.
Kaya: Yeah, it’s written! We’ll probably do another video off the EP, but then we’re like ‘what about these new songs?!’
Chris: We may have missed the boat, but we may be able to fit a new one in. It’s a timing issue.
Kaya: Because people are like ‘we want more videos’ and some are like ‘we want more songs!’

BA: So with the new LP, you’ve written the songs. When are you going to start recording them?
Kaya: Next week we’ll be recording all the demos.
Chris: And after that, we’re taking a little break. Then we head into the studio just towards the end of the year.

BA: And who are you working with label-wise for the new LP?
Kaya: Rude Records. They’re based in Italy. They loved the EP but we had nothing to release it on. And then they came straight to use and were like ‘we love it’ and they released it from there. Cool guys. We didn’t think anyone was gonna buy it.
Chris: Like we got the sales back for the first week, and we didn’t believe them. The label sent an email through with a number on, and we thought it was the currency. And our guitarist Sam was like “what currency is that?”, to which the label replied with “That’s not a currency, that’s the number of copies.” We were just like “Fuuuuuck.”
Kaya: And we were no. 2 on the Banquet Records Charts, and we were there with loads of bands we listened to and we just thought it was madness.
Chris: Thank you everyone for buying it!

BA: So, how long have you been in bands for then?
Kaya: I’ve been playing in bands since I was like 12. I’m 23 now.
Chris: Since a similar age for me too.
BA: And how would you say the hardcore scene has changed? And musically how have you changed?
Kaya: Well when I was 12/13, I knew nothing about the hardcore scene at all. I mean I’d play in my band and go to Leeds Fest, and the UK in its music scene is always, always changing.
Chris: And when I was younger I’d just use to try and write as much music similar to Texas in July as possible.
Kaya: My first ever band was a Red Hot Chili Peppers tribute band – One More Tribute. We’d just copy them… but we ended up getting heavier and heavier, and with my first originals band we just wanted to be like Mastodon. And as you grow older, you evolve with your music. I remember seeing a band called Trash Talk in Leeds at The Well, and it was carnage. And straight away I was like ‘I need to start implementing that in my music’. And then we played with them in Liverpool. It was crazy. 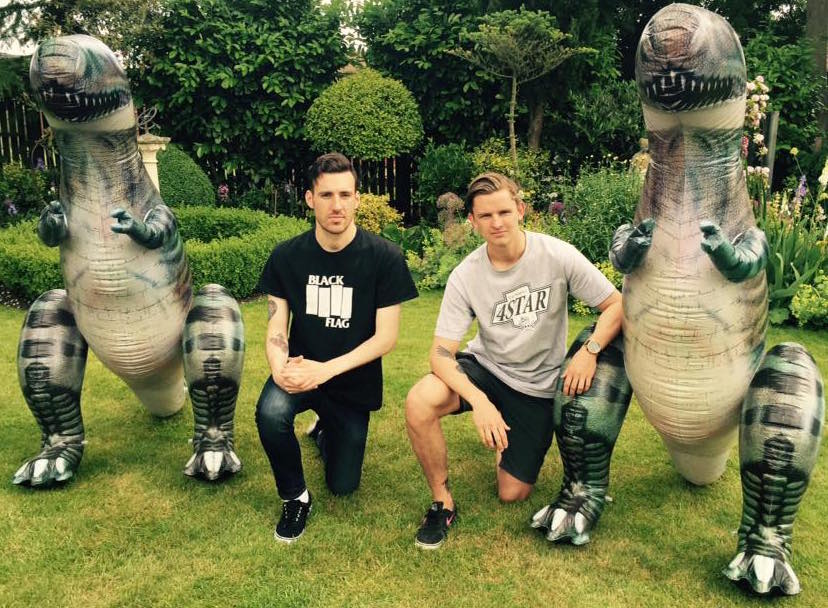 BA: Right, so with 2015, what’s been your favourite album so far?
Chris: I never know because I’m always unsure if the album came out this year or not…
Kaya: I’m gonna throw a wildcard… I’ve had quite a few that have been quite amazing. I listen to quite a lot of R&B. Like I probably listen to a lot more R&B than heavy music.
BA: What guys you talking?
Kaya: Like The Weeknd‘s album is probably my favourite album so far.
Chris: I really like Stray [From The Path]’s new album. That’d be my choice.
Kaya: Yeah that album is amazing. Argh, it’s such a difficult question…
BA: For me as well, like I can only think of one album, and it’s not even my favourite!
Kaya: Yeah, like I literally tweeted the other day what my favourite album of 2015 was, and I can’t even remember! I’ll get back to you!

BA: I’m gonna open it up now. Anything you wanna say? Anything you want to add?
Kaya: Yeah, just keep having fun and keep coming to the shows. Keep listening to us and keep supporting us.
Chris: Thanks to everyone who’s bought the EP so far.

Note: Kaya later messaged me to confirm his favourite albums of 2015 were Turnover, The Weeknd and Knucklepuck. Thanks to Chris and Kaya for their time, and Lauren for the opportunity. Check out Blood Youth on Facebook.