Trending
You are at:Home»Interviews»Brent and Cis of Steak Number Eight: “Our dream is just constantly touring. Go home, do the washing and go back. Et voilà.”
By Angel on March 5, 2015 Interviews

The filth-smeared hallowed halls of sludge metal have been trodden many times by many feet, but few are treading the path quite so well as Steak Number Eight. The oddly-named quartet out of Belgium have been playing together for over a decade, recorded three albums and embarked on several tours around their home country and the UK. Not bad for a band where the average age is just 21. Sitting in a cozy room backstage on couches, they call out to each other in Dutch, joking back and forth while swigging Belgian beers. I caught up with vocalist Brent Vanneste and guitarist Cis Deman for a deeper insight into Steak Number Eight and what makes them tick.

To start things off, Cis gives an update on how things are going in the camp: they’re still buzzing from last night’s show in Portsmouth. “Awesome,” says Cis. “First sold out show we’ve played in the UK. It’s amazing to play before Marmozets, they took us on tour, which is awesome.” But there’s a deeper history between the two bands, and it all started in a bar two years ago: “We said to each other, ‘if one of us bands becomes bigger and has to take someone on tour, we take each other on tour.’” And they kept their promise, thus the resulting tour with psych-rockers Thought Forms. Despite the fact that Marmozets are now on Roadrunner with a lot of success behind them, “they’re the same…knobheads,” jokes Cis after a pause. Brent pipes up that “we’re gonna take them in Belgium as support.” That’s true friendship.

They also mention that they may be playing a new song from the upcoming record, which “we’re working hard on. It’s definitely more psychedelic in a nice way, an easy listening way, not difficult mathematics or something!” They’re aiming for an album that can be put on anywhere, whether “Sunday dinner or a Friday night,” and currently have seven songs on their plate, with the aim to make it to ten or twelve, then decide which go on the record.

I pry a little more into how the band define psychedelic; do they mean jamming the tracks out or experimentation? “The psychedelic aspect of it is because Brent is more experimenting with stuff on his computer: Ableton, Reason, stuff like that. When you jam you experiment a lot, so that’s why it’s become a lot more experimental.” The other guys do bring in their ideas, although “the foundation is Brent. Then Joris [Casier, drummer] can choose whatever fill, I do all the guitar parts, either in a different way or I just play something totally else. We call that thing ‘Steakalizing’ the song.”

In fact it’s only recently the band started collaborating in this way; the first two records were pretty much all Brent. Their second record All Is Chaos in particular came from a very dark place in his life. “We still look to All Is Chaos, particularly the older band members, like ‘Wow, Brent, how did you make the song right then?’ And he was like ‘I cannot make another ‘Black Fall’ for instance right now. That was a one-time thing and I’m happy with it.’” 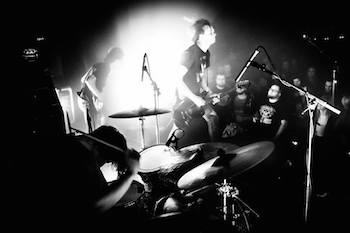 We get to discussing influences, both musical and non-musical alike. Records such as Oceanic by Isis and Leviathan by Mastodon are brought up as cornerstones of the band’s sound, although most of what inspires them is daily life. “Just what happens yesterday or what will happen tomorrow. I think everything in general. But not like any particular movies or something, but we do have a lot of movies in common.” When pressed on particulars, they reveal a couple of extremely odd selections. Brent starts cracking up at the mention of Attack of the Beast Creatures, having posted a clip on the band’s Facebook as their ‘tour video’,[1] and he also names the recent comedy Dumb and Dumber To and zombie-based Dead Snow as movies the whole band enjoy.

If there was any concern with these influences that their latest record The Hutch was going to be a light and airy affair, never fear. In addition to Steak Number Eight, Brent also composes film scores, and it was in this guise that he worked with Jan Beddegenoodts on the documentary Thank God It’s Friday.[2] “It’s about the Israel-Palestine conflict, a little village called Nabi Saleh and it’s like, every Friday there still are protests against the army. And we went there to present the documentary, it was very intense. There are a couple of songs [on The Hutch]inspired from the trip there. Once you’ve smelled the smell of tear gas and stuff, and rubber bullets and that… It’s dark. Really dark.”

Switching onto a lighter topic, they reflect on the supportive scene the band grew up in when it all started. “The biggest support was that my brother played in a band too,” recalls Brent. “That was the biggest thing, they were my heroes, y’know? And um, I was always sitting behind this drummer.” He stares and smiles in a way not unlike his teen self would have done, before the accident that claimed Thobias and inspired much of All Is Chaos. His other main musical guide was his mother: “My mum took me to London to see Amenra. They’re from Kortrijk, y’know, and I live 5 minutes from Kortrijk.” He laughs at the absurdity. “And the first gig was Slipknot with my mum and my brother. That was my birthday present.”

We talk a lot about shows throughout our conversation, and the fact that they can speak so freely about touring while still in the middle of another one, and with the next UK tour already planned with Prong and Hark, speaks volumes of the band’s grand designs for the future: “We wanna play a lot. More proper tours. Just not one.” But it’s not just about shows, as Brent points outs, “if you wanna play, you need a good album.” Cis rounds out our conversation beautifully: “Our dream is just constantly touring. Just go home, do the washing, new set of clothes and go back. Et voilà.” And they’ll be back again before you know it, hopefully this time with new material in tow.

Many thanks to Cis and Brent for their time, and to Andy at Indie Recordings for the opportunity.