If you tread back to the 60s early noise scene, you might stumble across an album by the lesser-known avant-garde and improvisational artist AMM entitled Ammusic. It was an early glimmer into the world of experimental sound suited to a rock environment – of exploring sounds and timbres outside of what people defined as ‘music’. Anti-music was the apt name given, and despite the band’s relatively underground voice, the album itself was highly influential. Inspiring the likes of minimalist composer Michael Nyman, who defined their works as “ground-breaking”, [1] the album caught unexpected success throughout the years, in turn influencing countless composers and artists to experiment with noise in a rock-setup.

Over the years since AMM’s eponymous debut, the music world has had its fair share of noisy experimentation. From the electronic, harsh noise of the preternatural Merzbow, to the mainstream experimentation of indie-noise pioneers Sonic Youth, an exploration over both the extremes of noise – and the potential commerciality of it – has been rapidly implemented into music. Now, unbeknownst to many, up-and-coming Edinburgh three-piece BRITNEY have created one of the weirdest and most fascinating noise rock releases of late with their third LP BRITN3Y. It shows a startling continuation that after 100 years of experimentation with noise, the genre is forever as exciting as Luigi Russolo’s inception in the early 20th century. [2] And as the trio mould their noise-rock formula to that of absolute impeccability, BRITN3Y is a pristine example of how disgustingly abrasive and relentlessly uncomfortable music can be ostensibly enjoyable.

The album kicks off with ‘Fully Ben’, unconventionally beginning with harmonised “erms”, like slugs reciting choral music. After this briefly bizarre introduction, the song kicks into its Lightning Bolt-inspired – albeit heavier – riffery. With comparisons to jazzcore favourites Zu, the relentless rhythm of distorted, abrasive bass tones and quintessentially routed and four-to-the-floor noise-rock drumming make this track an important welcome that shows the threesome demand close attention. With vocalist Stewart McLachlan’s guttural and unapologetic vocals piercing the musical skin of the record’s underbelly, the stride and aggro the band represent are masochistic. It’s as intense and brutish as noise-rock should be, powerful and hectic, yet well-constructed and formed.

Even though the set-up of distorted bass, drums and shrieked vocals are continued throughout the most part of the album, it isn’t without its diversity. The amount of subtle genre crossovers found in BRITN3Y are fantastic: Highlights include tracks such as ‘I.I.A.H.S.W.E.S’, which features a swung and somewhat more accessible stride. Penultimate track Gum’ features grindcore influences of acts such as Naked City and coincides this with other noise artists such as Black Engine. Taking on more mathcore sounds of The Dillinger Escape Plan, the main section of the track itself is over in 40 seconds, before the rest is filled with industrial ambience. 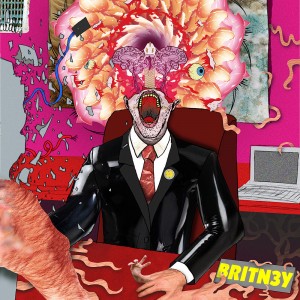 The breaks in the album consist of pseudo segues such as ‘Sleep Now, Dogman’, a harsh noise track reminiscent of vocal-noise artists such as Masonna. It’s entirely reversed and avant-garde: completely anti-music, these sections are used in surprisingly good taste, and provide an ironic respite before being sucked back into the intensity of the main tracks.

In closer ‘3DPD’, the track starts with an 808 electronic drum kick [3] that slowly disbands itself from the tempo, before the track ignites itself with a grounded riff which is ironically pleasant. Full of oxymorons, the band produce a lot of writing here that should not work, but miraculously does. The outro of this track includes a Neurosis-inspired sludgy breakdown, with Stewart’s haunting screams and growled machoism bringing the album to a crumbling end. A majestically eerie female vocal melody buried into the last track’s demise makes ‘3DPD’ feel like a ritual for the celebration of destruction. Like a Chuck Palahniuk novel brought to life through music, the closer is astoundingly intimate.

What BRITNEY have created here is an exemplary showcase of noise-rock, crossed with a plethora of other influences. Song after song, the trio implement both their technicality and emotion with absolute finesse. It’s a giant “fuck you” to the pleasure of sound, taking pride in their anger and its unapologetic ways. Yet, Britn3y rewards its listeners with music that, despite its disgusting abrasiveness, is completely and utterly enjoyable to listen to. An antithesis to the casual listener, BRITNEY’s third gift to the world of music is glistening in brilliance and attention to detail. It is bizarre in the best possible way.