To the uninitiated, the grindcore scene probably looks like a lot of loud noises, gurgled, hissed voices and supersonic speed – or it’s outright dismissed as a racket. And to some extent, it is. But the grindcore genre is also one sometimes played with incredible precision and unconventional methods. And a band like Buckshot Facelift is just weird enough to pull in new listeners with their latest release, Ulcer Island.

Concerning the genres they touch upon, Buckshot Facelift is probably one of the least conventional grind bands out there. Their Bandcamp describes their music as ‘The Grindcore of dying, vane American gods.’ And they may not be wrong about that because there is a constant stream of desolation and dreariness stapled into these songs, as well as a healthy heaping of hardcore/punk, old school grind, and some tasty death metal. 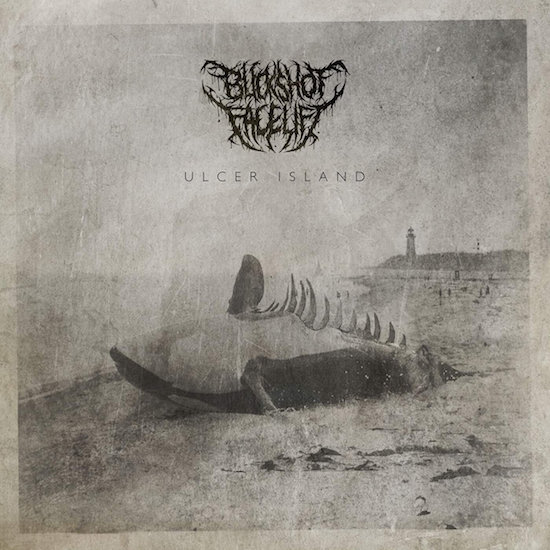 Where Buckshot Facelift go right in every discernible manner is switching up the beat without sounding like they’re just plugging genres. ‘Weathered Mask of Autumn (Unearthing the Armless)’ is heavy as hell; just brutal and pulverizing. The song is sludgy slow, but runs a good moshing vibe. The melodic leads (complete with pinch harmonics) keep the song’s teeth sharp too—there’s an underlying, carnivorousness. But it’s towards the end of the song that the band just lets loose with death howling blues. It’s a short-lived, almost Buddy Guy-sounding lick (if he dabbled in death metal a bit) but it resonates so loudly.

Meanwhile, other tracks on the album like ‘Ascend to Descend’ recall old 80s hardcore/punk gems. Hell, it verges on being a youth crew anthem, minus the gang vocals. Then the band twist the riff and turn it into a grinder, and then bounce the track back and forth between the genres again. Bending riffs to their will is Buckshot Facelift’s greatest strength.

But it’s not just the songwriting that makes Ulcer Island great; it’s the mood that they carry with them. The title track opener might take you for a ride and make you think it’s a punkier, grind record with some heavy stuff. No. This record is akin to looking out at a foggy, overcast day. Sometimes it’s storming, sometimes it’s settling. The band isn’t trying to pull you to the void, they just want you poised on the edge. Songs like ‘Hell Eats Repetition (Goodbye)’ are moody chestnuts, that one particularly because it’s a weeping, slow instrumental. Other tracks like ‘Sundress Skeletor’ play with a mean streak of deathgrind and a menacing underbelly. Parts of the song break into spasms and other parts are chopped up and heavy.

In the end, Ulcer Island is an exercise of desolation and aggression. It’s a soundtrack to growing up in the USA’s Midwest. Frustration, desolation, anger, violence with a heavy dosage of weirdness. No one quite writes songs like Buckshot Facelift. Grindcore, death metal, hardcore — they can do it all, they can meld it all, and they do it magnificently. Ulcer Island is an album that you gotta spin and spin again. The death metal guys will probably get it. Make sure to make a stop at Ulcer Island, more than once.