Bushwhacker manage to achieve something rare in contemporary metal on The False Dilemma, their second full-length: they deliver the unexpected. Let’s start with the name: the term ‘Bushwhacker’ conjures somewhat unfortunate visions of leather waistcoat-clad 1980s Australian stereotypes à la Crocodile Dundee. Thankfully, that vision is rapidly dispelled by the cover art. Possessing a background in illustration and graphic art forces me to judge albums to some extent by their covers. Bushwhacker have, in this case, commissioned something particularly appropriate to the doom/sludge genre they occupy that approaches the likes of John Dyer Baizley’s work for Baroness and Kverlertak. [1] Soft complementary tones, crisp linework and a compelling narrative of being caught between the endless battle of man versus nature pique the interest before the music even starts. Well played, Bushwhacker.

And then there’s the music. Even Bushwhacker’s own Bandcamp tags make classification a chore, listing genres from black to experimental to progressive metal. If pressed, I’d probably rattle off something like ‘post-progressive psychedelic sludge metal’ (and risk becoming one of those beard-strokers that nobody talks to at parties), but even that wouldn’t really be accurate. It’s in this non-description that the greatest – and most welcome – taste of the unexpected rears its head. Bushwhacker manage, without becoming pretentious, to embrace a multitude of genres and sounds and, in so doing, lay down an album of unapologetic, beefy, sweaty metal. Further classification becomes unnecessary, as there really is something in here for just about everyone.

Fast technical riffing? Check. Tremolo-picked atmospheric melody lines? Check. Introspective passages chock-full of sustain and minimal drum fills? Check. Downtuned, palm-muted sections that practically border on breakdown territory? Check. Sure, they’re all sounds and devices that have been used before – but Bushwhacker are combining these disparate elements with a fresh flair and aplomb.

Even after my cynical nature recovered from the shock of hearing – and actually enjoying – something that doesn’t fit my usual listening milieu, further surprises await. These manifest in various forms – from the ambient interlude that is ‘Cheewhat Giant’ to the fuzzy bass-driven post-pop sound (think a heavier Joy Division, almost verging on Lifelover [2]) on ‘The Return’. This latter is my personal favourite: repeat listening highlights an underlying sense of menace below the crisp guitar lines and clean vocals. Plus points are awarded for building up from such a simplistic structure to the dynamic lead guitar work that drives the last third of the song, too. 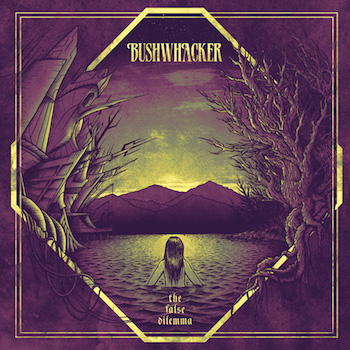 A similar recipe is employed on ‘Shikadance’ – but here the disparity between a quasi-tribal rhythm section and what comes across as improvisational lead work meanders into the realm of psychedelia – a direction Bushwhacker seem comfortable enough with to encourage comparisons, citing standard heavyweights of this genre such as Led Zeppelin as inspiration. While this psychedelic influence might not be as blatant as in, say, the work of black metallers Oranssi Pazuzu [3], it is nevertheless unmistakeable. The mid-album instrumental piece, ‘A Path’, is pure Pink Floyd worship, minus the Richard Wright synth lines. This sense of atmosphere is what will add to Bushwhacker’s appeal within the stoner/sludge oeuvre. It is also fairly par for the course when dealing with any act hailing from a ‘wilderness’ area – Bushwhacker originate from the Yukon – as typified by the Cascadian tendencies of Wolves in the Throne Room [4]. While this ambience is a direct carry-over from their 2011 eponymous debut album, The False Dilemma shows the band as a tighter unit and, while still progressive, less experimental and more grounded in their songwriting and arrangements.

The replacement of their original singer with Rory O’Brien is also a strong move as his vocal performance gives a far more convincing result than their 2011 album managed. While one person can’t be held entirely responsible for the vocals in a band where three of four members contribute vocal duties, Bushwhacker are definitely more on the money on The False Dilemma than on Bushwhacker, exploring gutsier growls and far clearer clean vocals throughout. Less than two minutes into ‘The Tower’, the opening song of 2011’s Bushwhacker, and the vocal effects start grating. Not so here.

Generally speaking, Bushwhacker have hit all the right buttons – but there are a few negatives. The thrashy roots of most of the songs could benefit with more polish during production. I’m all for rawness, but overall the sound is a tad scruffy around the edges, especially the bass, without the intentional reverb drenching employed by many doom stalwarts. Then there is the multitude of influences and styles present. I appreciate Bushwhacker’s ‘cover all bases’ approach, but this shotgun scatter effect is likely to lessen their potential impact: for example, straight-up death fans might bemoan the attention to atmosphere – to their loss. The frenetic nature of the album and its diverse array of sounds will translate more convincingly to an energetic live setting than it does as a studio release. In this way, 2013’s Fish Guy EP was a more sincere (in its distillation of all things psychedelic) offering in its heavily-layered, single 20-minute track, jazz-tinged paean to the drug-fueled 1970s gods, though this does make The False Dilemma an easier listen.

Despite not being a particularly memorable album beyond its effective application of genre-bending tropes, The False Dilemma is a thoroughly enjoyable experience with wide appeal. At this rate, Bushwhacker have a career worth watching.

FOOTNOTES
1. http://aperfectmonster.com/ is well worth wasting some time and bandwidth on. One of the greatest illustrators of our time and a pretty solid rhythm guitarist, too.
2. If you aren’t familiar with this Swedish DSBM band, here’s a good place to start.
3. Another good band to explore. Finnish psychedelia-tinged black metal. http://www.oranssipazuzu.com. Their newest album, Värähtelijä, dropped on the 26th February 2016. There is even a pretty impressive video for ‘Lahja’ at https://youtu.be/Q_lGSUrvWMo.
4. See this interview and this one for a bit more insight into how Wolves in the Throne Room’s lifestyle influences their sound.