In mid-September of this year, Texas-based Cara Neir and Wildspeaker joined forces to drop a split together. Cara Neir has consistently put out material since their debut in 2009 and are no stranger to making splits, [1] while this marks Wildspeaker’s first one despite their five releases in 2 years of activity. Released through Broken Limbs Recordings (who distribute largely black and doom/sludge bands), Guilt and His Reflection showcases two bands that are similar in that they mix different genres and styles, but distinctive in their heaviness and approach.

Cara Neir kicks off the record with ‘Halo of Grey’, and the track begins with a crust punk sound, screaming lo-fi vocals, and light progressive touches that slows down a bit before ‘Clinging to My Last Bit of Sanity’ comes in. From there the tracks are a mix of black metal, grindcore, and crust-punk, and the occasional melodic interlude. Drum programming is no easy task and can be a most effective tool when the listener does not know they are hearing computerized drum beats, and for the most part Cara Neir passes here. An example of good drum programming can be found on ‘Life from Inside Your Pocket’, which starts out blackened and then dips into a jazzy break before picking up again. However, there are a few spots where the drums sound artificial and struggle to keep up with the time signature and tempo of the guitar. The band’s instrumentalist Garry Brents also uses small but effective doses of ambient noise, with their short and creepy final track ‘Guilt’ the best example of this. 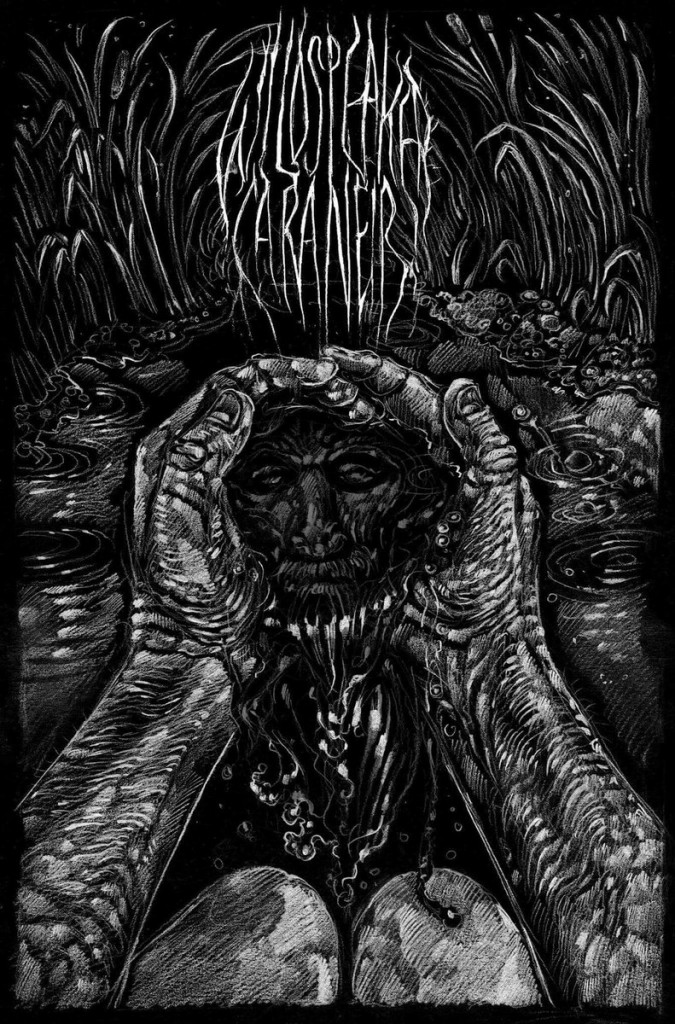 On the other side of the split, Wildspeaker enter in hard and fast, establishing a contrast to Cara Neir almost immediately. Each song is short and sweet at around two and half minutes, though the last track clocks in at just over five minutes. With their first track ‘Desecration Plague’, aggressive black metal riffs blast through the gate before breaking down into a crusty groove. The blackened crust influence remains throughout, with touches of sludge/doom metal added. Even songs such as ‘Stages of Decomposition’ that have a heavy punk presence still retain the black metal edge with tremolo picking and Ricky Riveria’s drumming. The final track ‘His Reflection’ brings all the influences into focus, giving each its own section and ending with ambient noise overpowering the guitars, suggesting a bleak moment of self-reflection when married with the lyrics: “He spits in the image of himself/Humbled to hideous vision/With one final breath our/Dissolves into decomposition”.

As a whole, the lyrics are where the split truly shines. The two bands constructed a “conceptual split”, and they have centered the lyrical content around a main idea. According to the split’s Bandcamp [2]: “The split details the decay of humanity crumbling into itself. This partnership exposes the story of post-civilization sins committed when desperation overwhelms.” Much like their separate approaches musically, there is also a noticeable difference in subject matter and writing. Cara Neir tend to write about human suffering and mental decay, and in this case, often in sentence form and from a first-person perspective: “I just walked out of a cave, so dark and dank. Now I’m driving a car on an empty tank. How the fuck does that work? Just look at the flames. I may die a lot, but at least I have lived. Over and over again” (‘Ego Eats Man’). On the other hand, Wildspeaker is more on the misanthropic side, telling a story of a man desperate and starving amongst the ashes, and told in a poetic verse style: “Having trudged this far/His heart no longer beat the same/From an Eden of abundance/To apologetic muttering over an empty quill” (‘Sins of Desperation’).

The split format of releasing music does not usually lend itself well to a concept album, but it is not impossible. While an artist uses a full-length album to expand on lyrical and musical themes, Cara Neir and Wildspeaker do it separately in less than a culminated forty minutes (Wildspeaker’s side being shorter). Reviewing such a split begs comparing how well each side does in their aims. While Cara Neir avoids the impression of “Hey! Look how eclectic and unique we are!”, bouncing from one genre to another can be jarring off-putting to some listeners. Overall their lyrics are interesting and well-written, but become a little exhausted on their end in the grand scheme of the concept. In contrast to Wildspeaker’s portion, Cara Neir’s sound does not reflect the content of the lyrics quite as well. The harsh vocals of Wildspeaker’s Natalie Kahan over furious riffs make for an abrasive listening experience, and one can easily picture a man at the end of his rope killing another man to survive while hearing ‘First Taste of Flesh’. They also use a mix of styles, but their side stays consistently heavy and the musical switches blend together effectively. Although Garry Brents mastered all of Guilt and His Reflection, the two sides diverge in approach to a common concept.

Footnotes:
1. Having made more splits than EPs or full-lengths, they have worked with the likes of Fleshborn and Ramlord, and even made a four-way split with Horseback, Njiqahdda, and Venowl.
2. https://brokenlimbsrecordings.bandcamp.com/album/guilt-and-his-reflection