“Alone, a plague. Together, a curse.”

Humanity – the lone, baleful bastion of civilisation, blindly wielding ambition, power and technology to seize with voracious intent what is desired from the Earth’s natural resources, with little thought for consequence. Such misanthropic thoughts and themes are a natural draw within the metal world, yet one band in particular have single-mindedly carved their entire ethos around this very subject, their vision unfaltering and their delivery remarkably astute despite the bedlam borne from their personal brand of aural extremity.

Over the course of their almost-twenty-year existence, Cattle Decapitation have not only churned out some of the most punishing conglomeration of death metal and grindcore imaginable, but have further done what so many strive to achieve but so few genuinely accomplish: to challenge and surpass themselves with each and every release. From their early days of all-out extremity and the accompanying slurry of infamous artwork [1] and lyrical content to match, the band’s bull-in-a-china-shop modus operandi has brazenly paved the way for their acrimonious message – something that is further catalysed through technical ferocity.

Clearly a band who refuse to be bound by the restraints that their moniker and musical direction might infer, recent years have seen the band expand their sound to introduce unexpected – yet certainly welcome – elements that have not only helped to define who they truly are, but have also allowed them to stand tall within a genre littered with monotony and unimaginative extremity. If 2009’s The Harvest Floor was a step forward for the band, 2012’s ambitious follow-up Monolith of Inhumanity was a giant leap, which saw the band incorporating sonic experimentation and melodic singing (a term used here in the loosest sense – Travis Ryan’s throat-shredding performance during ‘A Living, Breathing Piece of Defecating Meat’ could curdle milk) as well as an increased focus on songwriting, the band all the while refusing to let such additions detract from the irrefutably punishing final product. 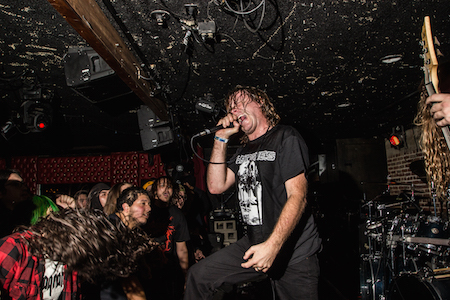 With seventh full-length The Anthropocene Extinction, it becomes clear from the outset that the band’s focus on songwriting is stronger than ever; a grand, ominous riff leads the charge into ‘Manufactured Extinct’ before erupting in a barrage of technically precise extreme metal – something that has come to be expected from one of the best in the business. It is no coincidence that the addition of drummer David McGraw and bass guitarist Derek Engemann coincided with the band truly beginning to find their feet; the duo’s contribution here is no less than jaw-dropping, with McGraw’s ludicrously tight playing once again furiously carving a path through the songs like a hot knife through butter.

“We had it all, the whole of Eden in our hands, the privilege of existence, the ubiquitous lay of the land”, growls vocalist Travis Ryan. The increasingly unacceptable state of the planet and the band’s unwavering abhorrence for those who contribute to its inevitable demise is constantly at the forefront of their minds. Travis, however, refuses to discriminate. “The powers that be are you and me”, he reminds us; “our human history burns its own pages.”

Travis Ryan’s vocals are a revelation, and whether spitting out bile-filled, rasping highs, barking middles or guttural lows, his effortless versatility and dexterity is astounding. Although the man himself remains incredibly modest regarding his contributions to the music [2], he becomes an essential component to the success of this album. His melodic vocals are entirely unique and at first polarising, yet repeated listens to the hate-filled crooning of a man who may as well be gargling sulphuric acid further reveals the extent of his impact upon an already ambitious release.

The heavy use of melody here shows a continued shift in direction for the band, but by no means is this any indication of dilution within their signature sound. With the world in its current state, Cattle Decapitation have more animosity to vent than ever before and are fully aware that extreme conditions demand extreme responses; the pounding groove of ‘Plagueborne’ (featuring a brief cameo from Author and Punisher’s Tristan Shone) and the short sharp shock of ‘Mutual Assured Destruction’ are but two examples of a band who are musically and lyrically focused at a level not attained until now. Their use of brief silence continues to be particularly notable here and proves incredibly effectual, with the rhythmic breaks and short bursts accentuating the sense of technicality and awe-inspiring song structure.

A broad range of subjects are covered within the overall misanthropic theme, from gory revenge fantasy (‘Clandestine Ways (Krokodil Rot)’) through to the cursed lives of circus animals (‘Circo Inhumanitas’), with Ryan’s blunt yet articulate lyrical treatment another key factor in what makes this album so exceptional. “The nets don’t discriminate”, he exclaims as the band trawl through the amusingly-punned ‘Pacific Grim’, their blunt sense of humour still intact, yet below the surface bubbles a very clear message regarding overfishing and ocean waste dumping. The band’s message continues along a path of hopelessness, metaphorically (or not) captured through the stark cover art depicting decaying corpses washed up upon the shores of a toxic wasteland, their bloated torsos bursting forth a slew of human refuse. 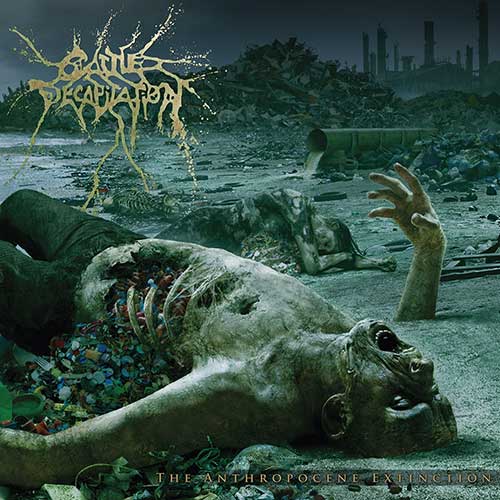 One song that stands out in particular is ‘Ave Exitium’; a sprawling, sinister lesson in apocalyptic blues atmosphere that bears a resemblance to Monolith of Inhumanity’s penultimate track ‘The Monolith’, with Ryan’s warning echoed in his final words on final track ‘Pacific Grim’: “With mouths open wide, our footprint steps inside, and when there’s nowhere to hide, death comes with the tide…”

With many scientists claiming that we are now living within the Anthropocene epoch in a world that has been altered significantly by our own actions [3], the album’s poignant closing line (a slightly altered Albert Pike quote delivered by Bethlehem’s Jürgen Bartsch) sums up the album perfectly: “What we do for ourselves dies with us; what we do for others remains and is immortal.”

Monolith of Humanity was an assault on the senses, and was hailed by many as one of the greatest conglomerations of death metal and grindcore ever conceived. While The Anthropocene Extinction is not as perpetually relentless on the surface, its focus and depth become the conduit for a final product that, from a certain perspective, is more intense than ever before; more polished without losing bite or bile (thanks in no small part to Dave Otero’s stellar production job once again), and more grandiose without losing sight of the band’s long standing, unrestrained identity.

The very fact that Cattle Decapitation are influenced by humanity’s persistent ruination of the Earth makes their continued rise and evolution a bitter pill to swallow. Yet ultimately it is the music that speaks for itself, and with this in mind, The Anthropocene Extinction is a remarkable achievement. A marvel of technically astute, immersive extreme metal with — taking their back catalogue into consideration — an unparalleled focus on songwriting, structure and melody. The Anthropocene Extinction portrays our species as the architects of our own demise, and when all is said and done, no event in the history of this planet will have been more fully deserved. That is the burden of seven billion.

“Ignoring isn’t the same as ignorance; you have to work at it.” The Handmaid’s Tale, Margaret Atwood.