Maybe you shouldn’t listen to this record right now. There’s an all-encompassing darkness that can swallow you whole while listening to Oshkosh, WI’s ambient/doom/drone unit Cavernlight’s As We Cup Our Hands and Drink from the Stream of Our Ache. If you heard their 2014 demo debut Corporeal, you might already know that. That latter release oozed ghostly dread and meditative anguish. It was as heavy as the moon that hangs in the sky, and just as scenic. Topping it wasn’t going to be easy.

As the first track ‘Lay Your Woes Upon the Ground, and Know that the End Will Soon Swallow You’ howls into existence, it feels like the blue sky is fading before your eyes – Cavernlight delve back into the darkness from which they came. Corporeal was their introduction, As We Cup Our Hands… is closer to a manifesto. It’s a solidification of the previous work; perhaps more focused, perhaps a little looser as well. And ‘Lay Your Woes…’ is the near eight-minute introduction that promises both this, and that everything is merely passing, like the midnight sky.

What Cavernlight has become is carnivorous; As We Cup Our Hands… is a more consuming experience. Don’t get me wrong though, their previous demo is nigh on untouchable. But the evolution and focus of the band is apparent. The music is grimmer but also more scenic. Whereas the previous demo was peering up through a dark hole at a blurry moonlight sky, As We Cup Our Hands… is the view from a hill top on a dense winter night. The crash of the cymbals is like snow falling in the darkened sky; the production like the cold snaps Wisconsin experiences every winter. 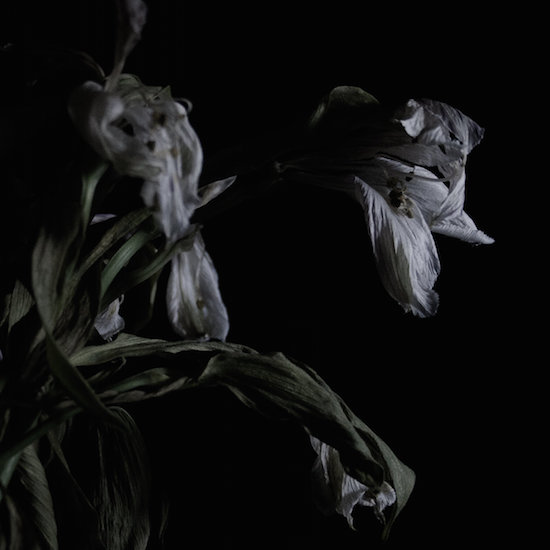 Cavernlight seem more content to devour you slowly rather than let you freeze though. ‘Constructing a Spire to Pierce and Poison the Infinite’ picks up the pace a little, but still at a trudging pace. The track can induce a trance. If you dig in your heels it starts to feel like a chanting mantra towards its slow doomy end – exactly the same way as Corporeal did. There’s something mesmerizing about the whole approach.

It’s challenging to make slow and ambient compositions still engaging, soul-tearing and so grim, but Cavernlight pulls it off. Song after song, As We Cup Our Hands… becomes more and more engrossing. ‘To Wallow in the Filth that Dwells Where Despair is Born’ is a harrowing and slow track. It’s doomier than the previous compositions but keeps up with the chilly atmosphere. The vocals are distant screams over the song. They’re not even at the forefront of everything, which only makes the track sound more harrowing.

By the time As We Cup Our Hands… wraps up, it feels like a conclusion to a ritual. Like a new day is beginning to break over the horizon as blood dries on an altar. Guest vocalist Sarah Green’s voice soars over the final track, ‘A Shell of One’s Former Self.’ It’s almost like a peaceful death, and the standout track on the album. It swells as the song swings forth and puts us down, surprisingly, comfortably.

Clocking in at thirty-six-minutes and at five tracks, the album never feels spread too thin, but it feels like another track or two would have really benefited the runtime. As it is, As We Cup Our Hands… is stellar, but also something you should save for the dead of night to get the full effect. Some of the best doomy, ambient music to cast its shadow over this year.