Trending
You are at:Home»Interviews»Chloë Alper: “I don’t believe in compromise.”
By James Parry-Smith on November 18, 2015 Interviews

At the height of their popularity, Pure Reason Revolution were lauded by some as the next Pink Floyd, with 2006 début album The Dark Third making waves within the progressive rock world and landing them support slots for two of prog rock guru Steven Wilson’s[1] bands at the time – Blackfield and Porcupine Tree — as well as further headline tours to appease their increasing fan base. Their subsequent albums became a showcase for the band’s truly progressive nature, melding their original sound with more electro-oriented approach to create a distinctive crossover flair that seemed to split opinion and yet was, ultimately, widely acclaimed.

The band split not long after their third album — 2010’s Hammer and Anvil — was released, with various members keen to explore new projects and opportunities. For co-vocalist, keyboardist and bass guitarist Chloë Alper, it marked the beginning of new musical and artistic directions; when Broken Amp caught up with Chloë following the digital release of ‘Heavy Love’ — the new single from her new band Tiny Giant — it was clear that she sees such directions as a natural evolution. “Tiny Giant definitely feels like creative progression for me. But its direction wasn’t premeditated. Rather, it’s something we arrived at organically. To me the result is simultaneously defiant and vulnerable; something which in itself feels like an achievement.”

‘Heavy Love’ is at once uplifting and airy but with enough of a rock injection to maintain its spirited pace throughout. Chloë’s wonderfully iridescent vocal performance lifts the song to even greater heights, contributing further to the already infectious melodies that surround the song. Where her voice once shone amidst a wash of effects and vocal harmonies, taking centre stage here truly brings her talents to the fore while the euphoric pop sensibilities and luscious production add a huge sense of life to the music.

While Tiny Giant’s blend of modern rock and dream pop is perhaps a rather different beast to that of Chloë’s previous band, she remains adamant that following your creative instincts is the only true course. “While I know our style won’t appeal to a lot of people, I don’t believe in compromise. In fact, the only thing I actively consider when writing is that I want to be unassailably and unapologetically myself. As a musician I think that’s all you can give.”

It’s clear that Chloë has taken a lot from her time in Pure Reason Revolution, and with everything the band accomplished during their eight year existence it has undoubtedly stood her in good stead for the future. “I’m very proud of what Pure Reason Revolution achieved”, she says, “particularly as I was one of the original members and we stayed together for such a long time. I learnt so much from the music, the touring, the other members and the way the band was received. I’ll always be grateful to it and its legacy for giving me formative experience.” When the band’s constantly shifting musical style is mentioned, she elaborates on the nature of being involved with such a project: “PRR’s ethic was to work without constraint so I think natural progression was an inevitable by-product. I think that’s why the output varied so much from album to album. I like to think that we were unafraid. But we were kids so that kinda feels like a bold claim.”

Four years may have come and gone since the demise of Pure Reason Revolution, but far from resting on her laurels, Chloë has been working with numerous musicians and friends she has met along the course of her musical journey, including a collaboration with Rob Coudert[2] for the song ‘Juno’, which was featured on the soundtrack to the 2013 horror film Maniac[3]. “As soon as I left PRR I started to write with different people. Tom Bellamy[4], Rob, Mat Collis[5], Arthur Jeffes[6]. It took a while for Mat and I to consciously process what we were doing enough to decide it should have an identity of its own. I still write music with Rob but he’s kept so busy with the band Phoenix and the scores he writes and my focus is Tiny Giant. That said, we steal time whenever we can. A song we wrote called ‘True Love’ is going to be the title track to the new Hollywood remake of Amityville which is coming out in 2016.”[7]

Chloë goes on to explain that, in terms of creativity, she has more control now than ever before. “Tiny Giant is a collaboration between Mat and I, whereas PRR was really Jon Courtney’s[8] musical vision. As much as I enjoyed playing in PRR, nothing feels as good as writing my own songs. I’ve never felt more creatively satisfied and I’ve never been more excited about the future.” She has — in recent years — gravitated towards a more solo-oriented music career, but by no means is this something that she has deliberately embraced. “Nothing for me feels deliberate. I’m led entirety by instinct, so all orientation—be it my career’s direction or something else—feels gravitational. My life is one of uncertainty. There is no routine, and I like it like that. I never make a plan. I left PRR because it felt right. My current focus is on Tiny Giant because I’m in love with it.”

As an audio engineer, Mat Collis has previously worked with Steven Wilson on his Grammy-nominated album Grace for Drowning; I mention the link to Chloë (as she has toured with Steven in the past) but it turns out that she and Mat have known each other for much longer. “It was before I knew Steven actually. Almost a decade ago, Mat and I had a mutual friend and I used to hang around at her house. I remember Mat would always be in the corner of the room writing music while everyone else talked rubbish and smoked rollies. One day someone played me a song he had written. I remember it moving me to tears because I was staggered at the amount of sensitivity I could hear in it. From that point I knew I wanted to work with him.” 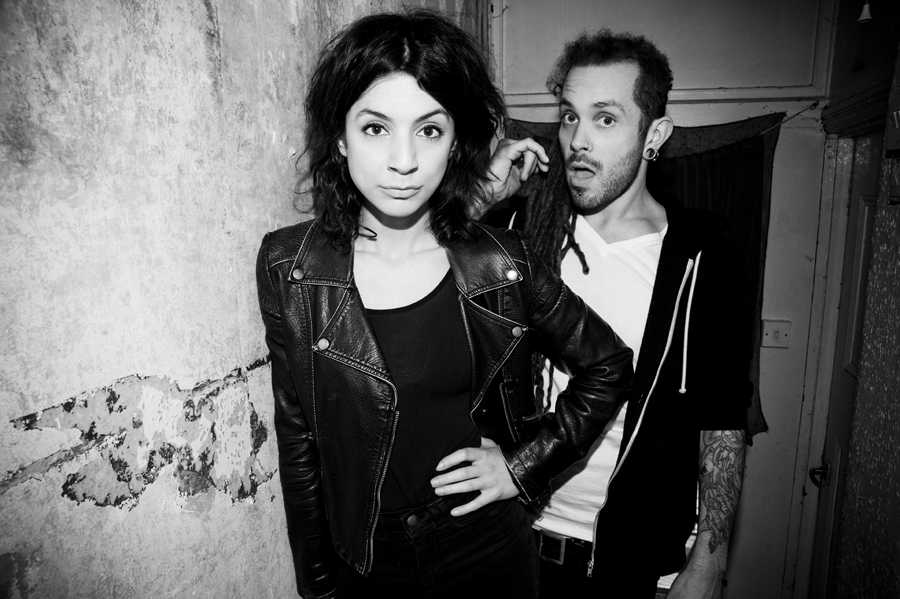 So where does Mat fit into Tiny Giant? “Mat is half of the act. We write the songs together. He is a multi-instrumentalist, writer, producer, engineer and a great friend so he’s very involved.” It turns out that although Mat is the band’s studio drummer, Tiny Giant’s live drummer is actually former Pure Reason Revolution sticksman Paul Glover. “Yes, Paul Glover plays drums live and he does a brilliant job of it. Some of our songs are somewhat challenging to play, but fortunately Paul’s the kind of drummer who does his homework.”

With the duo choosing to unofficially release their new single ‘Heavy Love’ for free via Soundcloud, Chloë talks about the reaction they’ve received thus far regarding the song. “It’s difficult to know how to ‘release’ music these days. Mat and I didn’t want to be compromised or shackled to a label from the beginning, but it felt counter-intuitive not to exhibit what we have been working on, so we just uploaded ‘Heavy Love’ to Soundcloud and were really surprised when it received love. We haven’t had any exposure yet so every comparatively little achievement feels like a big achievement.”

The creative process is always a fascinating subject, as well as one that can differ wildly depending on the individual. As a visual artist as well as a musician, Chloë’s past work includes the cover art for Pure Reason Revolution’s second album – 2009’s Amor Vincit Omnia[9]. “In my mind there is little distinction between art and music. To be artistic is a marvellous thing. Someone once paid me the most wonderful compliment in saying that I was artistic. I don’t know what it means, but I liked it very much indeed.” So what inspires Chloë? “Things that make my heart beat faster. Heartbreak, laughter, love, excitement, uncertainty. Jitters are very important to me. I try to have three set of jitters a day. I am addicted to frights. I leave everything to the last minute – paying bills, learning lyrics, making phone calls I don’t want to – I find the build-up of panic all rather exciting.”

With ‘Heavy Love’ having recently been released and with more music from Tiny Giant inevitably on the horizon, Chloë shares a parting glance at her future plans as the end of the year approaches. “Tiny Giant will definitely be my focus for the foreseeable. We’ve written so much material and we’ll be releasing it all gradually. In fact we’ve already started writing our second album! We’re in the process of shooting a video and we’re going to tour as much as possible, so expect lots of live shows throughout 2016 and imminent releases.”

From her time in a prominent and successful band through to a flowering career as a singer / songwriter, Chloë shows no signs of slowing down, and as someone who is not only consistently creative but also unapologetically true to herself, her future as an artist looks incredibly bright.