The most starkly interesting thing about CHON’s music is how unexpectedly accessible they are. A few weeks ago I was moving house to Nottingham, and played the entirety of their latest album Grow to my mother on the way there, assuming she’d consider their style to be a ‘musical overload’. She instead admitted that she loved it; it’s fun, happy, and simply charming. This sums up CHON’s music pretty succinctly: it’s a sunny, bright, enjoyable ride that delves between the shaky and sturdy, delivering a cocktail of musical goodness which many other bands fail to deliver with such musical integrity.

The San Diego-based and mostly instrumental four-piece have been gaining ground since their dawn in 2008. Having released two EPs, 2013’s Newborn Son and 2014’s ‘Woohoo!’, now comes their latest album Grow. Straight off the bat, it’s clear that this release is tighter, more articulate and considerably more focused. Featuring CHON’s quintessential complex guitar lines, which rise and fall in an effortless fashion, a track like ‘Book‘ is an instant charmer, with a guest appearance from Animals as Leaders drummer Matt Garstka. The track weaves between piano-like tinkling guitar lines, jazz-infused bass fills and Garstka’s driving grooves. One of the simpler songs, it’s a pleasure to listen to, with a poppy structure and catchy melodic lead lines, it’s a great way to kick off the album.

Moving away from the instrumental songs, Grow features two tracks which include vocals from bassist Drew Pelisek. Although nothing profoundly mind-blowing in the technical, Drew’s singing fits well to the tracks and add diversity to the album. With ‘Can’t Wait’ and ‘Echo’, the bassist’s vocals weave steadily over the more relaxed and chordal guitar melodies. More This Town Needs Guns than Polyphia, it’s reassuring to hear the band proving themselves as proficient at actual songwriting as they are at playing complex rhythms and phrases. 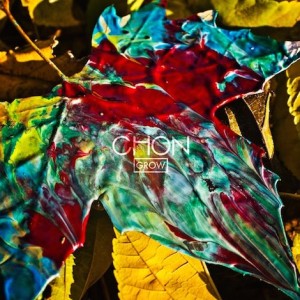 Other highlights include the rhythmically ambiguous and multi-metre tracks ‘Fall’ and ‘Perfect Pillow’. The former is a wonder of musical detail, featuring a quacky, out-of-phase and metrically-complex opening guitar phrase. As it jumps and cuts like the cinematography to a French New Wave film, the track throws itself through multiple sections, time signatures and styles. With influences that are hard to pin down, the track’s dexterity is surprisingly coherent, and never feels like it’s losing its place despite its enigmatic flow. Meanwhile, ‘Perfect Pillow’ is similarly marvellous to listen to. An old song that dates back to their self-titled 2008 demo, it itself starts heavier than their other tracks, with more drive and heavier playing. CHON show their musical prowess with ease with a polyrhythmic middle section, featuring harmonised guitar lines and a counter-point rhythm section, showing that even a 7-year-old song slots in neatly with the newer ones.

With all these guitar phrases, drum fills and metric changes, for some CHON could be an over-abundance of technicality, especially for non-musicians or at least those unaccustomed to math rock. Although songs like ‘Can’t Wait’ and ‘Echo’ may appeal more to a general audience with the light vocals, a 35-minute album made up of guitar sweeping and rolled drum fills runs the risk of becoming tiring or repetitive after a while, especially for those who prefer the simpler side of music.

In summary, Grow is nothing short of an outstanding outing in math rock. The songs move with an articulated stride, showing that complex doesn’t always mean forgettable, and that guitar sweeping can still be expressive and emotional. A simply outstanding record, CHON’s style has yet to show even the slightest hint of wear, and Grow may well be my favourite album of the year so far.