Trending
You are at:Home»Interviews»Christian Lindell of Portrait: “For us, heavy metal has been a road leading away from the boredom of a controlled society.”
By Angel on January 30, 2015 Interviews

Along with pioneering – or greatly aiding the development – many of the subgenres we know and love in metal today, Sweden has also played a strong role in rebirthing the popularity of many of the older subgenres. While many older fans and bands will be quick to argue that these genres never really died, you cannot deny that their general ubiquity waned for a couple of decades, before making a resurgence in the late 2000s. One of the bands soaring to the forefront of this is Sweden’s Portrait, a group with firm ideas about the state of heavy metal. For instance, they outright reject the term “old school”, instead referring to hallowed bands from that genre as “timeless”. I exchanged words with guitarist Christian Lindell about his band, as well as some insight into his views on heavy metal.

We start with the matter closest at hand: Portrait just started a UK and Ireland tour today with Belfast’s Rabid Bitch Of The North (dates below). It’s not the first time they’ve hit these shores – they played in London just last year, and did a three-date tour across Northern Ireland and Eire some years ago – but this time round they get to fully explore the UK. Christian remarks, “we can’t wait to water your soil with blood,” which is reassuring to know the audience is only in mild peril. The tour caps off with a date joining Primordial, a band they have quite some history with: Primordial’s frontman Alan Averill had a hand in getting Portrait signed to Metal Blade. This isn’t the first time Portrait have played with Primordial either: “We supported them in Germany in November together with Bölzer, and I think that was a great bill. None of the bands sound alike but the audience seemed to appreciate all of us.” Not unlike this upcoming show then, considering Primordial’s folk and black metal moments, and Malthusian’s death metal leanings.

Reading through the band’s extensive biography on their website, [1] one line from early on in their career sticks out in particular: “ideas about stage shows (many of which haven’t been possible to realize to this day) took form.” I felt compelled to ask which stage show ideas were in this embryonic state. Christian curiously remains quiet on the matter: “I don’t want to give away too many details, as we plan to realize some of the old ideas soon actually.” One idea, which is still on the back burner, is the concept of “all members headbanging with flaming hair. If anyone has a good idea on how to realize this, please get in contact with us.” Watch out for competition, Rammstein. 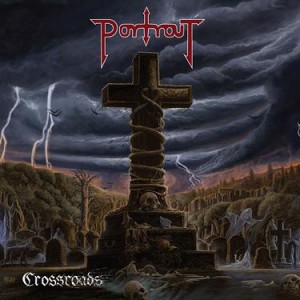 Turning our attention to Portrait’s new album Crossroads, I refer to previous interviews I read, where the band hinted at changes in the writing process and lyrical content. For the former, creating songs has become a more democratic process. “Some of it has to do with good attitude from newer members, but also I think that everyone in the band has grown into it, and have become inspired by the band itself. We have a common goal now.” Lyrically, the topics may have changed but the intention has undoubtably stayed the same: “The search for truth and the essence beyond the forms. It is a continuing process and will so remain for as long as I live, but as you get further on the path you obviously find stronger ways to express thoughts, feelings and experiences of course.”

Christian is certainly a guy who expresses his thoughts clearly and without any regard for holding back, especially concerning the heavy metal scene. I bring up a trend I’ve noticed where heavy metal listeners tend to be ‘lifers’ more than many of the younger sibling genres. “I know what you mean,” he replies, “and I shared that opinion for a long time. I think it’s a bit different in Sweden nowadays, though. There are some that would never leave, and that have been into it for their lives, but I don’t really believe that will be the case with younger people.” He puts it down to the Internet as a main cause. “Instead of having to go out to buy albums because of their cool record covers without hearing them, and maybe ending up with one album out of five that you really enjoy, now you can just connect to the Internet and listen to everything.” This has changed things irreversibly, “I don’t think people appreciate music in the same way.”

His views find a kinship with compatriots RAM, “we have the same outlook on heavy metal.” Christian expresses a desire to bring heavy metal back to its rebellious roots: “For us, heavy metal has been a road leading away from the boredom of a controlled society, its trends, lies, censorship and its enslaving rights and wrongs. Heavy metal has been like an outpost where such things just don’t matter, or exist at all. And in many ways that has been as important as the music itself.” He feels that political correctness, among other reasons, is “diluting” heavy metal. “For each ‘provocative’ attitude that they try to ban, they also try to lower the chances of the birth of another great band/artist. Seeing the climate change (especially in Sweden) even in the “underground” metal scene. We thought it was necessary to join forces against [the dilution].” As a step in that direction, Portrait and RAM collaborated on a split, covering a song from each other’s first release, and also choosing a second song with significant meaning to them: Exciter and KISS respectively. 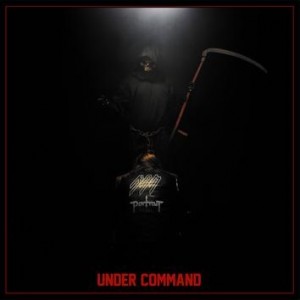 Speaking of Exciter, I brought up a big topic around heavy metal enthusiast: patches. When asked to design a so-called ‘battle jacket’ (a denim jacket worn ubiquitously and decorated with numerous patches), Christian answers without hesitation: “I have patches with Judas Priest, Iron Maiden, Accept, Mercyful Fate, Venom, Exciter, Portrait and Kat and Hellion on mine… I think that is a good start.” Good start indeed, and leads us onto a band near and dear to Portrait’s hearts: Judas Priest. When tasked with delivering an original song for Sweden Rock Magazine’s “CD Singles” covermount, they decided to deliver a cover version instead of ‘just’ another Portrait song. Given most of the band’s recorded output is untouchable in their eyes, they chose obscure number ‘Mother Sun’, which never saw official release. Working from the Reading Festival version (“I think the source tape from the Slough College one is fucked somehow”, the expert comments), they constructed an intriguing reimagination of an odd track to begin with, while vocalist Per Lengstedt puts in a performance comparable to Halford himself, who gave the song a thumbs-up. [2]

Never one to dwell on the past too long, Portrait are already looking to the future, setting higher goals for themselves in “writing better albums and doing more shows.” When asked what they plan to achieve in five years’ time, Christian replies, “I hope we will have at least two more albums out that we will be able to tour, also in the USA, South America and Japan.” However, lest people think the band are focused on financial gain, he clarifies, “If we could sell more albums and actually make some money it would of course be nice too, but that will never be the primary goal.”

Rounding off the interview, Christian gives a pithy answer regarding the heavy metal lifestyle: “Comparing heavy metal with other genres, I think what has kept headbangers being headbangers throughout all the years has to do with the things I mentioned in my answer to one of your previous questions, about walking away from cruel “normal life” by free will. When having done that I think many of us won’t feel the need to look back, ever. It’s all about embracing that ‘You don’t move me, I don’t give a fuck’ attitude of metal.”

You can catch Portrait on the following dates with Rabid Bitch Of The North:

Our thanks to Christian Lindell from Portrait and Andy from Metal Blade for the interview opportunity.