It’s been nearly six years since Mancunians Blakfish called it a day, and their mix of almost-nonsensical song structures colliding with pop harmony and hooks was something not many bands have been able to live up to. There are bands of a similar ilk such as The Fall of Troy and Arcane Roots’ early stuff, but Blakfish were unique – their heavy Manchester accents punctuating the anger of things that annoy them. The way they could switch from one musical entity to a completely different one in such an intelligent way is still impressing people today. But now, a three-piece named Classically Handsome Brutes from the even farther north land of Leeds are hoping to fill the Blakfish-ridden hole.

It’s important to note that Prolegomena is Classically Handsome Brutes début EP, yet the lads have already made quite a ruckus over in Leeds’ math-rock scene. Online zine Musical Mathematics have been showing keen interest on their social media, [1] and they’ve recently been supporting the likes of Heck (formerly Baby Godzilla) and performed alongside math-rock favourites Cleft and Agent Fresco. Live performances consist of mathcore-esque run-around-the-whole-venue, falling-on-the-floor-and-screaming acts, counterpointed with a real knack for technicality and tightness. So with this in mind, recreating the spectacle from the stage in the studio could have proven a difficult task.

However, the outcome provided is a replication that seems effortless. The EP kicks off with ‘Prolegomenon’, a spooky introduction with feedback-drenched guitars, unusual pitch-shifting ambience, and an almost uncanny resemblance to Arcane Roots’ ‘Aus Blauderen Verederen, Dus Moet Ik’. There are stabs [2] galore as the crescendo is built not from dynamics, but from chromaticism – jazz licks and dissonance become more regular as the record shifts into ‘Abberant Apparition’. It appears effortless, and as the EP moves from song to song seamlessly, it doesn’t tire or take a break. 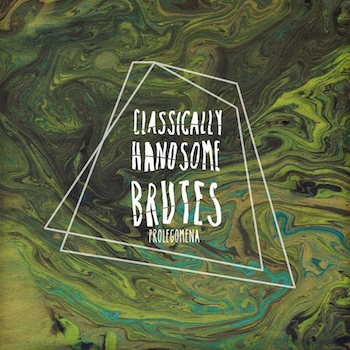 “Nice Things” is the highlight; incorporating all the math, jazz and hardcore elements that Classically Handsome Brutes do so well, the middle track is an immediate standout. Handclaps stars the track off before Jack Scarlott’s bass adds a quirky riff and the bandmates all go “woah!”. Now, that could sound like a pop-punk song, but “Nice Things” is anything but. The track moves through chromatic chaos, fuzzy bass and Meshuggah-echoing breaks, off-hinged rhythmic centres, and crowd vocals that are not-too-distant cousins of And So I Watch You From Afar. Here we see Classically Handsome Brutes “do a Blakfish”: they create chaos and coincide it with catchiness. Previous track “Aberrant Apparition” is also fantastic despite its brevity, and album closer “Möbius Striptease” contains all the nice things of “Nice Things”. A bridge break towards the end is extremely clever, as all the vocal motifs jump on top of each other, combined with a funk groove juxtaposed with an energetic slide-guitar part. In terms of musicianship, the trio are absolutely on point.

The end product is that of quality instead of quantity, and in a way, the whole EP is a massive teaser. Prologemena only lasts ten minutes, with two of the five tracks either a segue or an introductory passage. Although these ‘fillers’ serve their purpose, this is certainly not an EP made of tracks you can listen to independently or on shuffle. That said, there is so much going on in Prologemena that to ask for songs that perpetuate generic song structures would be borderline offensive; this EP is so busy, so compact, yet so absolutely full-to-the-brim with entertaining ideas that to say Prologemena “needs more” would be completely absurd.

All in all, Prologemena is startlingly impressive for such a new band. It contains all the bizarre fucked-up mathcore influences, but at the same time remains infectiously catchy. Although comparisons to Blakfish may seem to come up a little too often, the Leeds lot never come across as frauds. It’s refreshing to hear math-rock so compact, and so much more punky, than a lot of the tapping-filled “twinkly math” that seems to be becoming a little too crowded within the scene. So, if you like your music fast, techy, contagious and to the point, Classically Handsome Brutes have succeeded with complete ease.