It’s not often that a record will inspire such diverse reactions in me as Cold Years‘ Death Chasers does. Typically, such albums will be in the avant-garde realms, where I can maybe appreciate what the musicians are trying to do, but that doesn’t mean I enjoy hearing the end results. In the case of this five-track EP from the Scottish band though, it’s for very different reasons. Simply put, the reason I keep rebounding off Death Chasers is that it is too well crafted, too clean, wrapped up in a production that takes any edges off of their blue-collar punk. And yet, it’s hard not to appreciate what the band are doing, and to admire them for writing such accessible, well-crafted songs, even if I don’t think I’ll ever enjoy them as much as I think I should.

There’s a lot of positives to Death Chasers. Cold Years have a real talent for writing hooks and choruses that will stick in your head for days, and in Ross Gordon they have a frontman who is full of charisma. His vocals are powerful, carrying melodies with grace whilst also possessing the grit and roughness that adds an extra sense of maturity to the songs. Behind him, the band are undeniably talented, even if rarely flashy. The only real stand-out elements are some of the guitar lines that accompany his vocals on tracks such as ‘Split Blood’, but their talent does come through in other, more subtle ways, such as how they make the transitions and changes of tempo and emphasis throughout Death Chasers all seem so natural and obvious. I’m also a big fan of the subtle shift in tempo and use of dual vocals towards the end of ‘Split Blood’, the best part of the whole record to me. 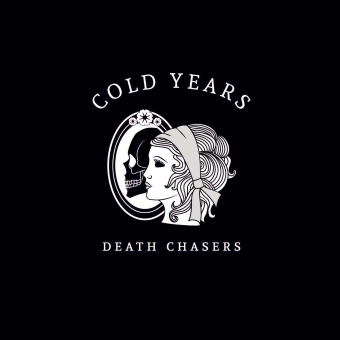 Yet I keep coming back to the production. I’ve always felt this kind of music – that recalls the likes of Hot Water Music and latterday Against Me! as much as it does Bruce Springsteen – is best served by a production that allows the rawness to come through, that makes it sound as if the band were recorded at the moment when they reached the end of their tether, putting their music down on tape before their lives finally collapsed. But on Death Chasers, there’s an almost mainstream sheen to the songs, and with the exception of closer ‘Troublebound’ – the darkest, most aggressive song on here – I can almost imagine these songs being played on the radio and no one batting an eyelid. I can understand if Cold Years wanted something cleaner and louder than the sound on their previous release, Mile Marker, but I can’t help but shake the feeling that Cold Years would be better served by letting a little more dirt come through. It’s also notable that the record is a more mid-tempo, less noisy affair than Mile Marker was; it feels as if the band are moving towards blue-collar rock rather than punk.

I’m willing to concede that not everyone will feel this way, and there are points during ‘Song For Our Ghosts’ where the polish on the music contrasts well with the desperate vocals. It’s not difficult to imagine Cold Years finding a much larger, possibly even mainstream audience based on the back of Death Chasers, and there’s nothing inherently wrong with that. But, that same sheen that gives the record such potential is the same reason why, as much as I might appreciate it, I don’t think I’ll ever be able to love it.