There is a rich heritage of artists from the doom metal domain whose album titles, artwork, band and song names speak volumes about the substance of their music; before the listener has even hit play on the record, they possess awareness of how the music will sound (examples include Sunn O)))’s drone-doom slab Black One and Candlemass’ trad-doom classic Epicus Doomicus Metallicus). Revengeance, the fourth full-length by Liverpudlian trio Conan is no exception. The unashamedly “heavy metal” cover art offers perfect insight into the aural content of the album, resembling the impenetrable riffs and trudging percussion of Nordic giants whilst summoning lyrical decrees of folklore and historical warfare.

Conan are self-confessed purveyors of “caveman battle doom” [1], delivering an extremely dense assembly of unforgivingly heavy, low tuned, barebones riffs. The vocals are a mixture of sporadic, yelped battle-cries and low growls which creates a uniquely gruff sound when paired with the heavily distorted guitars. For those familiar with Conan’s work, this depiction will sound familiar, however they manage to add key variations to their sonic template to create their most diverse record thus far. They add bursts of pace to their notoriously slow sound dynamic (immediately noticeable in the opener “Throne of Fire”), the riffs progress more expertly and the wider use of effects adds more scope to their brand of sludge, drone and stoner-infused doom metal. Revengeance is the first to feature new drummer Rich Lewis and bass player Chris Fielding [2] and it’s a statement of their proficiency behind their instruments, balancing intricate measures with primeval hits and supporting basslines to perfectly suit their sound. 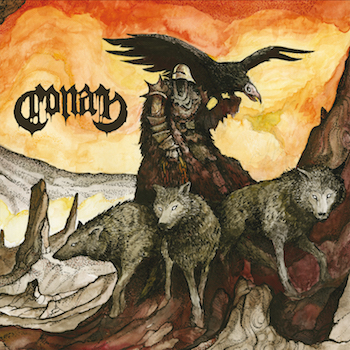 Revengeance is incredibly heavy throughout, offering no interruptions in its extreme complexion for its near fifty minute duration. This can at times be overwhelming, there is no assistance like in their earlier work (such as ‘Golden Axe’, an instrumental from 2012’s Monnos). It agitates and plunges, as if Conan’s main goal is to induce thoughts of mythical Goliaths and snaking leviathans through their instrumentation. Repetition is a common feature of Revengeance, but when the enjoyment in the hypnotic reprisals begin to wear off, they offer refreshingly new angles to their sound, such as adding twisted psychedelic effects to ferocious guitar playing, featured in the weighty pair of ‘Thunderhoof’ and ‘Wrath Gauntlet’. Similarly, ‘Earthenguard’, the ambitious twelve-minute closing track, features monolithic, recurring riffs which swirl into a warped outro, descending and ultimately fading out to conclude the album in an intense manner.

Notably, Conan exploit and juxtapose tempo to create a new twist to their sound, such as in ‘Throne of Fire’ and the grindcore-referencing blastbeats in the title track. This results in echoes of the pummelling sounds comparable to the stoner/thrash hybrid of artists such as Black Cobra and High On Fire. ‘Revengeance’ is the centre-piece and highlight of the album; the extreme speed paired with aggression and evolution into bouncy riff territory is a masterstroke in structure and progression. As soon as the listener grows accustomed to the drum refrains which cue the reappearance of the high speed measure, Conan instead enter into a groovy riff, catching them completely off guard. It shows that elements of Conan’s music have become more suited to energetic crowds: it’s easy to imagine the hooded three-piece setting off circle pits wherever they perform these aforementioned tracks, or ‘Every Man Is An Enemy’ getting hundreds of people moving in a similar manner to that of when Gojira perform ‘Flying Whales’. [3]

Overall, Revengeance is an excursion into gritty heaviness. It showcases its brilliance numerous times and has enough variety to keep an avid doom fan interested and adore the final outcome, especially for those longing for something punishing and primitive. Its objective is to devastate the listener with its monolithic immensity; this will be the reason it will be loved by the initiated, but potentially become overwhelming to the more casual fan of slow and low varieties of metal. By increasing the variety of sound whilst continuing to revel in low-end riffage, Revengeance is conceivably Conan’s most solid work yet and serves as an ideal introduction for those who have yet to explore both Conan’s music, and their approach which pushes the boundaries of all the extreme components of doom metal.

FOOTNOTES
1. Conan declare this as their genre on their Facebook page, in all caps!
2. They announced the departure of Paul O’Neill in late September 2014 and declared Intensive Square member Rich Lewis to be their new drummer the following month. Earlier that year, Chris Fielding was announced as the replacement for bassist and backing vocalist Phil Coumbe. Fielding has produced all of Conan’s work, including Revengeance.
Sources: http://www.hailconan.com/new-lineup-upcoming-shows
– http://www.hailconan.com/rich-lewis-joins-conan
– https://www.facebook.com/conandoom/posts/705024409549340
3. Gojira manage to get crowds into a twisted pogoing frenzy whenever they play this track live. Here’s them performing it at France’s Garorock Festival in 2009.