Trending
You are at:Home»Interviews»Craig Hogan (Sinister Visions Records): “I always had a different business model to others.”
By Angel on December 4, 2017 Interviews

For one guy in Manchester, England, the future is a sinister vision…well, unless his record label gets off the ground. Craig Hogan is the founder of Sinister Visions, an extreme metal startup intent on changing the direction of labels with a new model. We caught wind of his Kickstarter campaign, and swapped some words with him about his intentions, label practice and funeral doom hi-fives.

This is far from his first rodeo in metal or its surrounding industry, however – he first got into this noisy genre around 9 years old. “My best friend over the space of 12 months switched me on to KISS, Billy Idol, Bon Jovi, Def Leppard and then Slayer! From there we started to explore thrash and death metal, then into the punk and New York hardcore scenes. Now I listen to anything that catches my attention whether it’s metal, hip hop, country, whatever – if I like it then it’s added to the playlist.”

This then extended to his own contribution to the community – first co-founding, then becoming the sole owner of the site All About The Rock, which started in 2011. “The site came about with me and a friend called Chris Key when we were sitting in the work canteen in November. We were naive enough to think we could write reviews for a living,” he says with a laugh. “He could write and I had the knowledge to build websites so we started All About The Rock and that went live on December 2nd 2011. Our first gig we covered was Earache Records’ ‘Next Big Thing’ event at Manchester Ritz, where we interviewed Evile, Savage Messiah and Cerebral Bore.” In terms of Sinister Visions itself, he’s running the joint by himself, albeit with help: “I do have a few people I can rely on who have offered services such as writing press releases and doing the accounting etc.”

The genesis of Sinister Visions came from a recurring phrase Craig heard with many of the bands – signed and unsigned – “there is no money in music.” Finally, the time came where he decided to change that: “For the last few years I have wanted to start my own label. I always had a business model in mind that seemed different to other record labels’ business models and would have started the label about 3 years ago,” exception depression kicked in hard. After a rollercoaster ride of medication, he feels in a much better place. “So now I am feeling better, I am at the point in my life where it’s a case of ‘Do it now or you will never do it’.”

So what makes Sinister Visions unique? The main phrase driven home is that the label is “artist friendly and business ethical,” though how that compares with other label practices remains to be seen. Craig does specifically mention that they will be using recycled materials “where possible“, and they will also be donating 10% of their profits to different mental health charities each month, a topic which is close to Craig’s heart. To quote from their Kickstarter, “Our business model is simple… The band pays the costs for studio time, recording, mixing and mastering. The label pays the production costs of the chosen medium(s) of the finished album (CD/LP/Cassette. This is agreed on a per band basis). We also pay for any necessary advertising and PR costs.” Regarding the tricky matter of digital sales (and who gets what from them), that is still to be finalized. “The plan is to give me access to their BandCamp accounts and social media accounts and I can help to manage those as well as the label’s Bandcamp and other social media accounts.”

How is Sinister Visions planning to raise the funds? Well one primary source is from their Kickstarter, which contains a series of pledges to catch the attention of all, from the casual fan to those who are fully committed to the cause. The entry tier includes ‘hi-fives’ that will be received on January 2018 – funeral doom metal hi-fives? “I now have a vision of a sloth listening to funeral doom giving a high five,” he remarks, fully agreeing with the concept. Further up the chain, we see an offer for a living room show. Given Sinister Visions’ main export plans to be extreme metal, could this get a little chaotic? “This will not be an acoustic show…this will be a full on rager of a concert in your living room. If you hate your neighbours then this is the ideal package for you!” He finishes with a laugh, though it’s not entirely clear how serious he’s being – nightmare neighbors are something Craig has a history of.

With a name like Sinister Visions, we can take it as read that they are going to be plowing the fertile soil of extreme metal, but that’s not the entire spectrum that Craig wishes to draw from. “In an ideal world, I would love to cover all avenues of the heavy metal genre spectrum.” We’ve seen many labels branch out into previously untapped – for them – territory; Prosthetic taking on post-punk, Earache moving to classic rock, and Profound Lore have a history of hip hop. Craig references “delving into the punk and hardcore genres also,” so it’s good to know that the roster is not going to consist solely of cookie cutter black metal or death metal outfits.

As for the concrete goals of Sinister Visions and the Kickstarter money, “the Kickstarter funds were to try and cover the costs of advertising in the big magazines and the big sites – the Metal Hammers, Decibels, Brave Words & Bloody Knuckles kind of places.” Speaking of the bigger picture, Craig lets his not-so-sinister vision be known – “the ultimate concrete goal is to try and give a fair deal to bands and artists, to not come at them with complicated contracts – our contracts are written in plain English with no jargon and no small print. I want Sinister Visions Records to be at the forefront of changing the recording industry, to make it more rewarding for the artists signed to us.” Starting a record label in this current climate – speaking both in the music industry and the world at large – is a challenging venture, and Craig certainly demonstrates a willingness to shake things up. 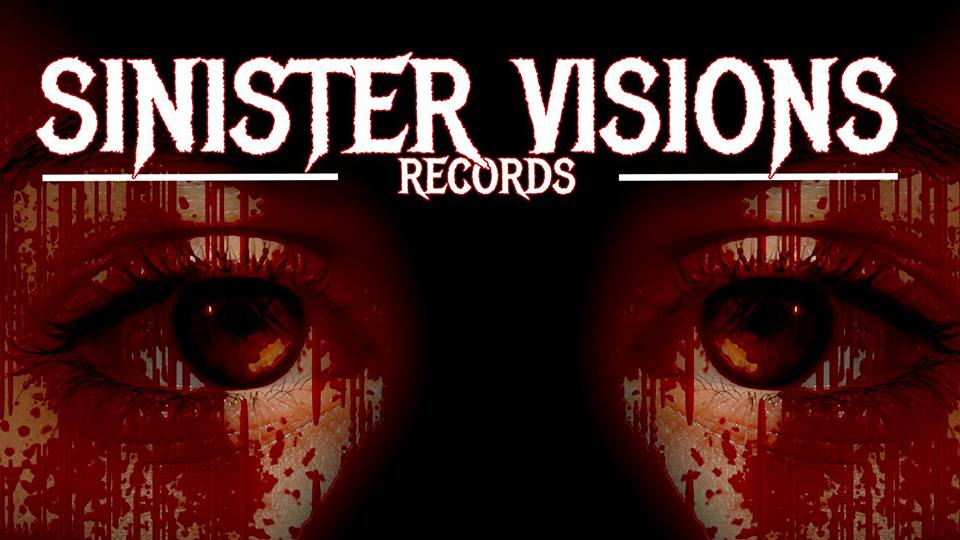 Thanks to Craig for his time. Check out Sinister Visions via Facebook, Instagram, Bandcamp and the aforementioned Kickstarter.