Trending
You are at:Home»Interviews»David DiSanto (Vektor): “Metal and sci-fi go together like peanut butter and jelly.”
By George Parr on June 18, 2016 Interviews

Science fiction’s infinite possibilities provide vast stories of intergalactic settings with futuristic technology and alien life. It is an inherently imaginative genre, and has long been a companion of metal and rock music, with Rush‘s 2112 being a prime example. Vektor’s third album album, Terminal Redux, isn’t just an album that uses sci-fi influences and thematics, it is sci-fi. Based on the concept of a lone astronaut discovering a life-rejuvenating molecule and eventually attempting to bring balance to a galactic, war-torn empire, Terminal Redux is a hard-hitting album, and its sci-fi concept places it as one of the most inventive and forward-thinking thrash releases in years. We exchanged words with Vektor’s David DiSanto about it.

“I have my dad to thank for [my love of sci-fi],” explains frontman and songwriter David DiSanto. “He’d let me watch all types of awesome movies when I was a kid that most parents wouldn’t let their kids go near.” Films like Blade Runner, Mad Max, The Thing, The Howling and La Planète Sauvage were favourites of DiSanto, and have clearly had an influence on his writing. The story of Terminal Redux is a well-crafted sci-fi epic, with inspirations that date back 16 years to when DiSanto first heard Rush’s ‘Hemispheres’. ““We will call you Cygnus, the god of balance you shall be” has been echoing in my head ever since then,” he says. “About five years ago, I started doing research on the myths and legends behind the Cygnus constellation. I was captivated by all the old stories about it. Cygnus was thought of as a bird on top of a stellar tree, which is actually an arm of the Milky Way. People thought the stellar tree was a river of souls and Cygnus was the ruler of those souls. So, Cygnus became a physical entity in my head, an all-controlling empire, and they were the dictators of life and death. I tied that into the title track of [previous album]Outer Isolation. I wanted to tie up the loose ends of the lone astronaut in that song like why he was alone in space, where he was going, and what he would become.”

Whilst writing, DiSanto visualised the album’s concept “in movie-form”, claiming that “it helped me to visualize what was happening in the songs while I was writing them.” This brings to light an interesting topic, as the album’s story would undoubtedly make for an epic sci-fi film like those DiSanto grew up on. “It would be incredible to see the story come to life,” he says, “I’d even consider doing an anime series or something. That would be rad!” 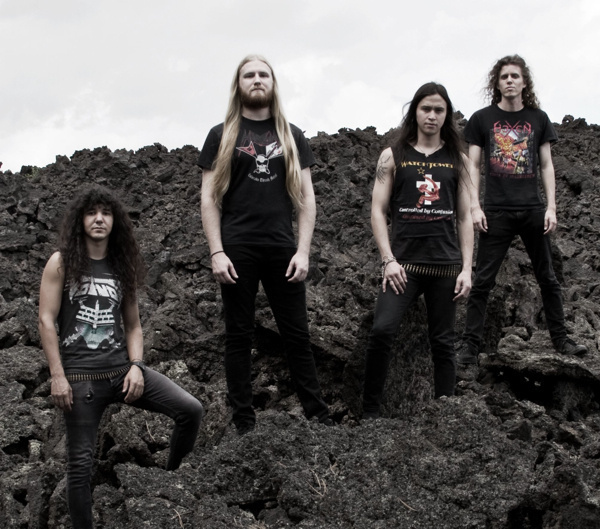 Musically, DiSanto cites metallic inspirations such as Sepultura, Slayer and Immortal alongside the conceptual grandeur of prog acts like Rush and Pink Floyd, making it easy to understand where Vektor’s combination of outlandish sci-fi concepts and abrasive thrash metal comes from. “It’s hard for me to write any other way!” explains DiSanto, “Metal and sci-fi go together like peanut butter and jelly. I think the two concepts complement each other perfectly, and the sci-fi adds a technical layer to the thrash. From the very beginning, I wanted to combine all of those influences and make something new from them.”

Where Vektor’s previous two albums, Black Future (2009) and Outer Isolation (2011), saw sci-fi themes melded with Kreator and Destruction-esque riffage, Terminal Redux takes a step into uncharted territory, by bringing in a clear concept with a complex narrative. “I just wanted to do [the story]justice,” says DiSanto, “I wasn’t really aiming to write a complex concept. It was actually very hard not to overdo the complexity of it. I just had so many ideas in my head, and it was a challenge fitting everything into a cohesive album.”

This challenge was one Vektor clearly rose to, given that Terminal Redux has received widespread acclaim from not just the thrash scene, but metal as a whole. “It’s all about being open-minded,” DiSanto says of their diverse fan base. The group have appealed to many with their music, as DiSanto notes. “We see black, death, thrash, and prog metalheads at our shows. We even get a bunch of people that aren’t even into metal that come to our shows. It’s kind of strange to me, but cool. We’re inclusive to everyone.”

You’d expect that with such a varied fan base, Vektor would have a slightly more commercial sound than the average thrash band, but with expansive track-lengths and an aggressive thrash sound born from an endless onslaught of killer riffs, Vektor are hardly one to take on the mainstream through the traditional route. “I think I’m just bad at writing hit songs,” DiSanto says, perhaps too modestly. Vektor’s music is more about “deeper, more philosophical topics,” as he explains. “It would be great if one of our songs ended up being commercially successful, but that’s not the intent at all.”

The future for Vektor looks bright, but DiSanto explains that the album “drained me.” So can we expect another concept album? “I don’t know if I have another concept in me at this point! Maybe, who knows? It’ll just depend on what type of inspiration I get.” For the moment, though, Vektor have time to live in the praise of Terminal Redux. “From this point, we’re going to focus on touring for the next year or so. We’ll be in Europe throughout August and we have a US tour in November.” He gives a final note to fans and fans-to-be regarding the band’s image online, and how social media still counts for a lot in the industry. “Please follow us on Facebook for all our tour updates. With album sales being low these days, promoters tend to look at how many fans you have on social media sites. The more followers we have, the more likely it’ll be that we can tour near you. I’ll be working on new material in the meantime. Sci-fi or die!”

You can follow Vektor on Facebook here. Their new album Terminal Redux is available via Bandcamp and Earache Records.