Canadian outfit Dead Asylum’s brand of death/thrash metal offers a fun listen, albeit not quite as accomplished as their influences. Death Always Wins is a little rough around the edges, but stands up well to repeat listens thanks to a handful of great tracks.

The songwriting on first listen may feel a little messy and uninspired, but after a few listens, you’ll get Death Always Wins. You won’t find the traditional verse, chorus structure here, and a few tracks tend to drag on a touch, but there is plenty to enjoy thanks to great melodic riffs, deafening brutality, and sublime guitar solos. ‘Forgotten Sacrifice’ makes great use of dual guitar melodies and riffing. It’s the strongest track on the record but, unfortunately, this isn’t saying a lot about the uniqueness of the album overall. 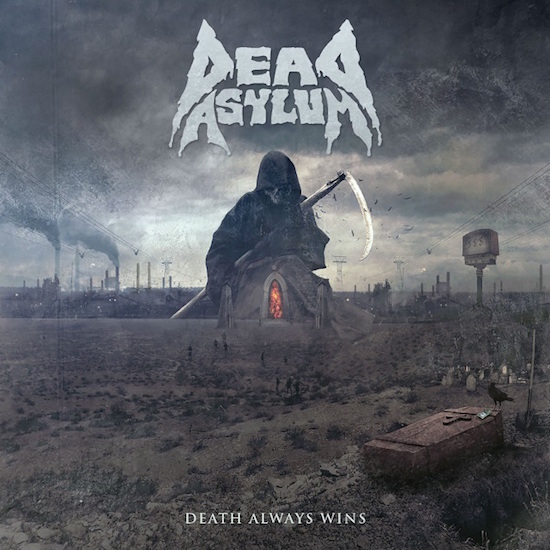 Yes, it may sound somewhat similar to the melodic brutality of Amon Amarth, but the mix, vocal delivery and drumming holds it back from achieving the greatness of its Viking cousins. For a self-released album, Death Always Wins sounds great, but it still lacks power and a little clarity. The vocal delivery is a little lacklustre, too. Roger Mowat and Mike Lister both put in decent performances, but there isn’t much emotion and not quite enough power in their death growls. In addition, Samantha Landa’s kick-drums sound a little hollow and distant compared to the power of the guitars here. She can blast them like anybody else, but the mix feels watered down.

A producer might have been helpful in ironing out the small issues in the songwriting and delivery. None of it here is bad, however, so don’t get the wrong end of the stick. You’ll be listening to tracks such as ‘Defiance’, ‘Forgotten Sacrifice’ and ‘Inmate 666’ for a while, at least. Each of these three tracks offering something heavy and enjoyable.

Death Always Wins doesn’t outstay its welcome. Its eight tracks combine for a fairly short 31 minutes of music, but if it lasted any longer, you wouldn’t replay it as much. Death Always Wins, despite its shortcomings, is a fun record that you will probably have on repeat for a few days. It’s a little messy and can feel a little flat, but plenty of effort went into the album. Hopefully a record label picks Dead Asylum up in the future, as there is a potentially great band there.