Trending
You are at:Home»Interviews»Into The Deep: In Conversation With James Harrison (Oceans Ate Alaska)
By Angel on November 13, 2014 Interviews

Even in oft-maligned genres such as metalcore, there are still gems in the undergrowth who have set their standards higher than the bar. They know how to stand out from the crowd, and are smart in their methods of doing so. One such band are Birmingham upstarts Oceans Ate Alaska. Much like the tidal wave after which they are named,[1] the band have experienced a rocketing rise in fans despite their recent formation. Instead of jumping on the road and bankrupting themselves, these guys spent time crafting a reputation on various social media.

This did them absolute wonders on their first tour, as vocalist James Harrison recalls. Sat on the steps going down to The Underworld, where they are due to play in just a couple of hours supporting The Word Alive, he has fond memories of that tour with Blessthefall: “The fans really came out and overwhelmed us with their support.” He gives away some of the game plan for this time round as well: “This time we’ve tried to step it up, get a bit more crowd participation going, try and rein in even more people who haven’t heard us before.” It goes down a storm during their set, as crowdsurfers fly onto the stage and the audience sing along with James’s sugar-coated cleans and roaring harsh vocals.

When prodded on the bands that got him into the style of music they play, James proudly announces he’s a pop-punk kid, and immediately points to Sum 41. “They’re the main band that really got me into music, and this whole ecosystem of rock. They got me into experimenting with singing in a band. From there it divulged, I started listening to As I Lay Dying, Bring Me The Horizon, August Burns Red and Parkway Drive”. These heavier bands show in his vocal styles, particularly on heavier tracks such as the recent ‘Blood Brothers’ off their upcoming album, name yet to be announced. The music and artwork is completed, so it’s a matter of time before they announce their début on Fearless Records.

The band previously announced a move to proggier, techier territory on this album, although this was always the intention with their sound: “We’ve always wanted to be that progressive strain of metalcore”. Their début EP, Into The Deep, was undeniably the sum of their influences. However, this time round “we’ve got better at our instruments, we’ve progressed as a band, and got tighter as a band. It’s more of an ‘us’ feeling.” The songs that we witness tonight give a strong indication of how far the band has come: muscle-bound drummer Chris Turner in particular is incredible, making light work of the band’s more technical moments, and going in hard for the requisite breakdowns. The axe-slingers are no slackers either; the band are clearly well-oiled in their stage presence, knowing exactly which moments to bounce, kick and generally rock out. 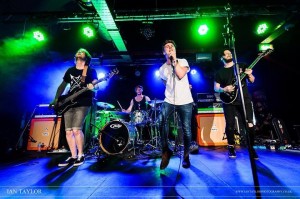 When not gearing up for the release of their album, Oceans Ate Alaska have no fear in having a little fun in the studio, jumping onto the metalcore-covers-pop bandwagon with a soon-to-be-released cover of the famous Beyoncé/Jay-Z number ‘Drunk In Love’ for Punk Goes Pop Vol. 6. While we haven’t had the privilege of hearing the full track, there is a studio update of the band recording the song which gives a strong indication of where that track is headed.[2] Personally, I had always assumed this bandwagon was born from a sense of irony in a metalcore band putting breakdowns into Lady Gaga, but that’s not the case. “With metalcore, it is quite a catchy strain of metal music. Most metalcore bands have singing in the choruses and things like that.” Is there an influence factor for many of these bands, given their younger ages? Yes of course, but it’s not just that: “The energy from metalcore and pop goes hand in hand.” And if there’s one thing metalcore bands have in buckets, it’s energy.

It’s impressive that a band who have only been together for three years has landed a spot on the Punk Goes Pop compilation, and much of that is down to the hard work the band have put in to promote themselves, particularly in the vast wastelands of social media. Aside from the usual suspects of Facebook, Twitter, YouTube and Tumblr, Oceans Ate Alaska explored every possible avenue to ensure their music was heard: “We went on Reddit, all the music forums, even the new chat-based option on the Kerrang! website.” Of course there is a chance of blurring the lines of privacy with their personal accounts, but the band have their heads screwed on. “We don’t mind people adding us, we’ve got open accounts if people don’t want to add us but they want to check us out. We are pretty much on top of all of our social medias all the time every day.”

It’s done a world of good for them; they’ve amassed a very strong following, and still have energy to burn and tour relentlessly. “I love touring because I love traveling around and visiting different cities,” James remarks, before revealing that one of the band’s main plans is to hit the holy grail of pop-punk and metalcore: Warped Tour in the US. “Our fanbase is mostly North and South America, so it’s a great platform to promote the band to thousands of people every day for two months.” From that point, the band’s aim is to “see how far we can get. We dream a lot about what we can do.” At the rate they’re going, James’ plan to be on Warped this year or next year doesn’t seem far-fetched at all.

To round out, James gives an insight into the band’s motto and outlook on life. “We’re five best friends, we just enjoy playing music. We all have our own completely different hobbies. We have a strict majority voting role, and we don’t argue against it. We haven’t argued since being in a band, ever.” That latter point in particular is a sticking point, in an industry which seems to pride itself on division between musicians in bands and the gossip it generates. With the positive attitude James outlines, and some of the most exciting music modern metalcore has seen in their set, it’s clear that Oceans Ate Alaska will go far.

Thanks to James Harrison and Oceans Ate Alaska for the interview/live set, and Matt from Hold Tight! PR for organizing it.