Following up on their fourth album – and Season Of Mist début – In Crisis, and fresh from a breakneck tour of east Asia, Japanese death metal legends Defiled have returned with Towards Inevitable Ruin. On the surface, though the album’s flat production and chaotic combination of punky, thrashing death may seem somewhat dated, the veteran 90s death mongers’ 5th full-length is more than a statement of flat-out, naked brutality.

The first thing one might notice about the album is its defiantly lo-fi mixing, at first leading to a flat, seemingly uninspired listen, owing more to guttural, bludgeoning crust-punk than to death metal. The album’s production forgoes the chainsaw treble, or cavernous reverb so prevalent within the conventional old school death metal of the day, instead adopting a simplistic, bludgeoning, ‘no posers, no mosh’ attitude to their music. However, Towards Inevitable Ruin isn’t as straightforward as it may first seem; whilst the album is musically rooted firmly within old school death-thrash territory, the release is full of pleasantly surprising variation. Vicious, rapid grinding is often juxtaposed by strains of irregular, prog-infused dynamism, be it oddball passages of wailing leads, or juxtapositional time signature changes – which, whilst not an entirely innovative feature, hold up due to their tasteful usage. 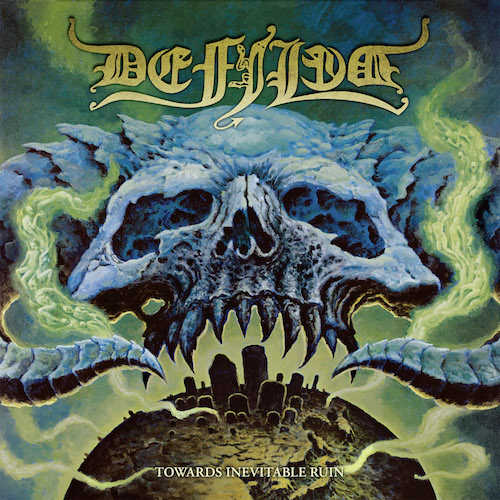 The differing sounds on offer are another factor that lends to the dynamism of the album, from the almost NWOBHM-y jaunt of opener ‘Subversion’, to the chaotic, morbid speed of the title track. Defiled’s sound on the album is varied yet coherent, and refreshingly so, lying somewhere in the extreme late 80’s crust punk and old school thrashing death metal. Following on from the more conventional death metal racket of 2011’s In Crisis, Towards Inevitable Ruin sees the band bring back the thrash metal influence, with a plethora of catchy, million mile an hour crossover riffing incorporated into its passages. Whilst those partial to the band’s back catalogue may jump to the conclusion of the influence of Slayer or Kreator, the oddball influence of Canadian madcaps Voivod runs far more strongly throughout the release; from the delicately proggy structural shapes, to its somewhat less delicate punky aesthetic, to its ponderous, but nonetheless vicious song titles such as ‘Doomsday’ or ‘Force and Obedience’.

One of the most endearing qualities of Towards Inevitable Ruin is the tightly-wound fury which runs through the album’s labyrinthian passages, complemented by the aforementioned catchy, thousand-mile-an-hour riffage, and nestled comfortably alongside this is nigh-inhuman drumming from Keisuke Hamada. Every single song on the album is carried upon a palette of blasting goodness, recalling Sarcófago in its neatly syncopated rhythmic patterns, shining through the minimalist production to show off the band’s impressive chops.

Whilst on the surface, Towards Inevitable Ruin might appear like an outdated, dull piece of throwback genericism, the strength of the compositions, and the intensely rehearsed aggression on offer hold the album up. Whilst listeners used to the cleaner production values and noodly extravagances of modern death metal might be put off, Defiled’s steadfast, no-frills aesthetic will leave long-time fans, and appreciators of primal thrashing death metal, with much to feast their ears on.