Trending
You are at:Home»Features»Distorted Prose – Dälek, Heavy Metal and the Rise of Industrial Hip Hop
By Tom Woodward-Massey on September 4, 2016 Features

2016 has witnessed the return of the utmost important group in the micro-genre that is industrial hip hop; Dälek. After a seven-year absence, the experimental three-piece resurrected their noise-rap vision to record their sixth studio album Asphalt For Eden. The group fall on the far-left of abstract hip hop, but released the LP through Profound Lore – a label that specialises in extreme metal. [1] Seemingly an odd pairing, after listening to Dälek and exploring the conception of industrial hip hop and influences that shaped it, the connection between this strain of hip hop, extreme metal and industrial becomes crystal clear.

The influences heard in industrial hip hop originated from an unexpected combination of disparate artists, genres and sounds. The first essence of the genre was, surprisingly, from England. Mark Stewart of genre-bending post-punk purveyors The Pop Group created a chopped-up take on on his sophomore solo album As the Veneer of Democracy Starts to Fade. The sounds derived from early industrial pioneers Throbbing Gristle and Einstürzende Neubauten and the thick, tentative stylings of Miles Davis’ divisive avant-funk masterpiece On The Corner. Many artists followed suit in genre-bending pursuits, one of which was Adrian Sherwood; primarily a dub reggae producer, Sherwood began working with members of rap innovators The Sugarhill Gang to create a blend of funk and industrial by forming Tackhead, subsequently allowing him to work with industrial rock pioneers such as Nine Inch Nails and Ministry later on in his career. 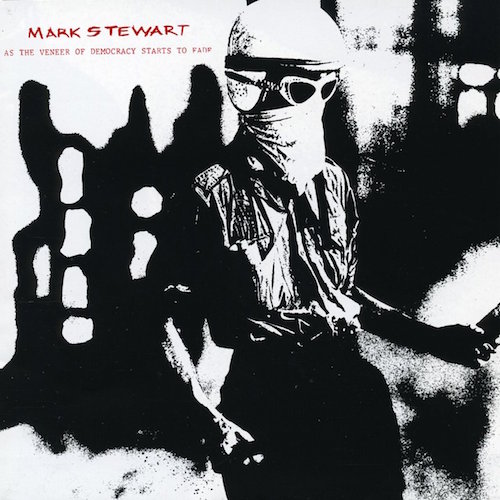 Even prior to these noise-beat concoctions, there are seemingly less obvious influences that helped to form the basis of industrial hip hop. Public Enemy’s dense, wall-of-sound sampling were as confrontational as their political dispatch, and they were one of the first groups to fuse extreme metal and rap. [2] Another producer who elaborated on such sampling experiments is El-P. His eclectic, often difficult beats and icy, claustrophobic production can be heard in distinguished records such as Fantastic Damage, Company Flow’s Funcrusher Plus and Cannibal Ox The Cold Vein, which offer detached and challenging beats (comparatively to the soul and jazz of alternative rap groups such as De La Soul) and thus allowed for the darker and increasingly elusive soundscapes of industrial to flourish in hip hop. Trent Reznor of Nine Inch Nails – who collaborated with El-P on ‘Flyentology’ – is no stranger to hip hop, with his music extensively showcasing rhythmical, hard-hitting beats. Moreover, the early single ‘Down In It’ even featured rapping from the man himself.

Shortly after The Beatnigs’ self-titled début became the first fully-fledged industrial hip hop album (released through hardcore punk label Alternative Tentacles) and member Michael Franti paired Public Enemy-style production with shades of urban industrial with The Disposable Heroes of Hiphoprisy, the turn to steer the direction of industrial rap fell into the hands of heavy metal musicians. Napalm Death members Nick Bullen and Mick Harris began trialling blends of ambient, dub, industrial and trip hop with their experiments amounting to several significant releases under the name of Scorn. Justin Broadrick (Godflesh and Jesu) and Kevin Martin (The Bug) then became the perfect example of the relationship between hip hop, heavy metal and industrial with several important releases. Whilst the ever-prolific Broadrick had experimented with hip hop-esque beats on Godflesh albums such as Songs Of Love And Hate and Pure (the title track even sampled Eric B. & Rakim’s ‘Let The Rhythm Hit’), he formed Techno Animal with Martin and recorded The Brotherhood Of The Bomb, a seminal classic featuring harsh noise, beats as heavy as concrete slabs and ribcage rattling sub-bass in addition to guest spots from rap figureheads Antipop Consortium, El-P and of course, Dälek.

This guest spot allowed New Jersey experimental hip hop group Dälek to tackle the underground, armed with a maelstrom of influences shaped by those before them. Forming in Newark in 1997, Dälek began unleashing their unique blend of industrial clatter, shoegaze-influenced drones and hip hop lyricism on their debut album Negro Necro Nekros. Starting out as a two-piece comprising of MC Dälek and turntablist rEK (who was soon replaced by production mastermind Oktopus), they took the music world by storm and offered sounds that appealed to hip hop fans, metalheads and experimental music fans alike. The dissonant, abrasive instrumental soundscapes paired with fluid, political rapping resulted in Dälek finding an unprecedented and esoteric position in music which allowed for a crossover of fanbases.

They were snapped up by Mike Patton’s Ipecac, a label which celebrates a diverse roster of artists including Patton’s own experimental groups Fantômas and Tomahawk, sludge metal artists Isis and Melvins, and dark ambient/jazz act Bohren und der Club of Gore. Ipecac released Dälek’s sophomore record From Filthy Tongue of Gods and Griots in 2002, a record which broadened their dense hip hop meets the uncompromising intensity of Einstürzende Neubauten by way of My Bloody Valentine’s wall of sound fuzz. It became clear to see that Dälek were a group making music by themselves, for themselves; always challenging and not catering to traditional elements of hip hop. This is perfectly summarised in ‘Black Smoke Rises’, a track which throws away the beats and favours sporadic spoken word with abrasive noise for 12 minutes. Following on from a collaborative album with krautrock pioneers Faust entitled Derbe Respect, Alder, Dälek brought out Absence, perhaps the most celebrated and consistent record in their catalogue. An album that warps and flows seamlessly from one track to another, the noise of Absence is lucid and abrasive, with Oktopus showcasing his skills as one of the most original and imaginative producers in hip hop. ‘Distorted Prose’ sees double basslines encounter twisting industrial sounds, ‘Köner’ stretches into droning ambient and the in-your-face beats of ‘Eyes To Form Shadows’ are sure to make anyone nod their head for its entire duration. Dälek’s politics became increasingly recognisable, exploring themes of socioeconomics in ‘Asylum (Permanent Underclass)’ and ‘Opiate the Masses’. The follow-up, Abandoned Language, saw murkier temperaments and intricacies begin to surface under their signature wall of noise approach, highlighting Dälek’s musical character as ever-expanding.

This year saw the release of their sixth album Asphalt For Eden, and despite a new line-up, [3] it is one of Dälek’s strongest records to date and serves as an excellent introduction to the group, encompassing all manner of the groups notorious traits heard throughout their discography. Continuing on from their relationship with the extreme and heavy, Asphalt For Eden was released through Profound Lore records, a label specialising in challenging extreme metal including progressive strains of black metal and unnerving doom metal. Their entire career has explored this affiliation, drawing influence from many genres, shades of mood and texture, earning them support slots for numerous artists on radically different sides of the musical spectrum. On the hip hop side, they have shared stages with The Pharcyde, KRS One and Grandmaster Flash, and also with disparate acts such as Mastodon, The Dillinger Escape Plan, Earth and Tool. 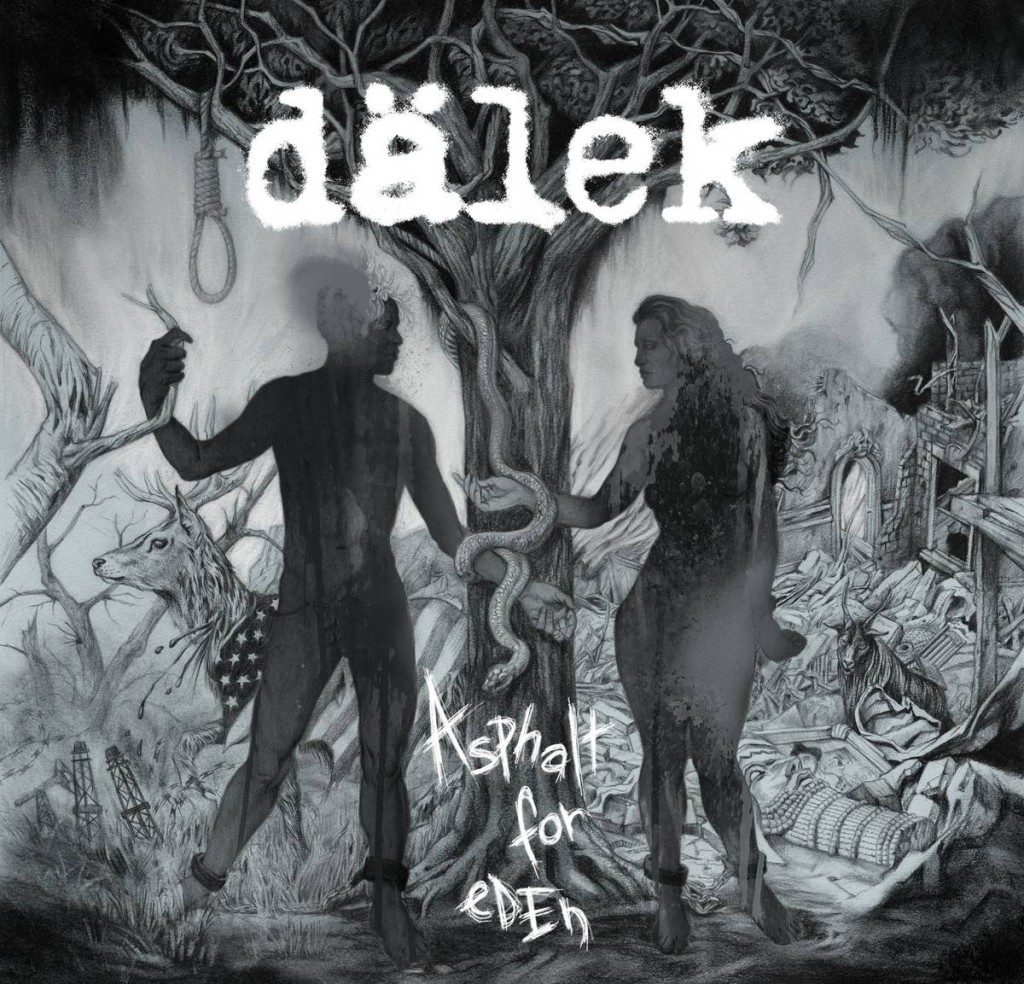 Dälek offer a thought-provoking listen to hip hop heads and allow for a gateway into rap for fans of extreme metal and experimental music. Whether creating pulsating beats and unforgiving industrial rackets, touring with some of the most acclaimed metal artists of the last thirty years, or being the only hip hop act on an independent label specialising in the extreme, Dälek’s crossover success and status in the underground is unrivalled.

During Dälek’s hiatus from the music world, the Sacramento three-piece Death Grips became not only the next big thing in industrial hip hop, but one of the most discussed and acclaimed groups in rap and indie music in general. More vocally aggressive and beat-centric than their influencers (thanks to drum virtuoso Zach Hill of math rock purveyors Hella behind the kit) with a sound, aesthetic and performances parallel to hardcore punk, Death Grips took the world by storm with several acclaimed releases including Bottomless Pit, The Money Store and Exmilitary, blurring the line between rock, left-field electronic and hip hop with their antagonistic vocal measures and eliciting samples from hardcore punk acts Black Flag and Bad Brains in the process.

The success of both Dälek and Death Grips fashioned a legion of cult fans and inspired musicians. Clipping., NAH, Moodie Black and Show Me The Body all propose similarly abrasive, noise-influenced and beat-heavy music, and Yeezus saw Kanye West plundering the underground and exhuming industrial influences, confusing and delighting many in equal measures.

The sounds of industrial have been formally ingrained in hip hop and popular music as a whole. Kanye West has utilised it, David Bowie and Björk have cited Death Grips as an influence, [4] Aesop Rock raps about Ministry on ‘Blood Sandwiches’, [5] and the unmistakeable grit associated with the genre can be heard throughout Earl Sweatshirt and Danny Brown’s work. [6] The originators of the genre such as The Bug continue to revel in ear-splitting noise and block-rocking beats, offering a cultural crossover of British grime and Caribbean music with industrial noise. All of these feats were possible thanks to Dälek and although they didn’t invent industrial hip hop, they sparked the flames which led to its triumph. With legions of DIY musicians creating similar sounds to the New Jersey pioneers, it appears that we’re going to see plenty more from industrial hip hop in the future.

2. Public Enemy sampled Slayer on ‘She Watched Channel Zero’, collaborated with Anthrax on a cover of ‘Bring The Noise’ and toured supporting them.

4. Björk recorded original vocal cuts which Death Grips sampled on Niggas On The Moon and the group remixed two of her Biophilia tracks for a remix version of the album. David Bowie was also known to have been influenced by Death Grips during the making of his final album Blackstar (Source: Factmag)

7. Special thanks goes out to online music database Rate Your Music, whose genre breakdown and numerous lists regarding industrial hip hop were essential in the research and writing process of this article.