Trending
You are at:Home»Reviews»Metal»Downfall of Gaia – Atrophy
By Dayv Oblyvyon on November 30, 2016 Metal, Reviews

If you’re calling your latest album Atrophy, you’d better be ready to back it up with some deeply dissatisfied music. Germany’s Downfall of Gaia thankfully inject every millisecond of their newest release with scornful resignation, crafting what the accompanying press release describes as a “record about the absurdity of life and human existence.” This post-black (bordering on DSBM) approach to sludge makes for easy comparison with the likes of Altar of Plagues or Harakiri for the Sky [1], but my initial reaction remains most prominent, even with repeated listening: Downfall of Gaia are a contemporary version of The Cure [2]. Admittedly, their music is a lot heavier, and they have two vocalists (picture a pair of bearded, even grumpier Robert Smiths), but the songwriting shows excellent pacing, the mood is equally dark and the low/high end counterpoint between rhythm and lead could all be lifted directly from Faith or Disintegration. This high/low, texture/melody conflict and interplay between the twin guitars is present throughout Atrophy, but really comes to the fore in the title track.

That same conflict is a pedal point in the generation of atmosphere on the whole album: from the tension generated on the appropriately-titled ‘Brood’ to the obviously Cascadian Wolves In The Throne Room overtones in the middle section of ‘Ephemerol’, [3] there is always a sense of being pulled in multiple directions. Subtle vibrato bass notes (mixed tastefully, right up front in the mix) vie for attention with gentle tremolo melodies, the ever-so-slight differences in texture the vocals of Anton Lisovoj and Dominik Goncalves dos Reis provide – there is always an undercurrent. The consequence is an atmosphere that has none of the frozen desolation or seared hellish destruction that is present in most blackened metal offerings, but is rather one of bleak hopelessness. It’s akin to watching a horror movie where the protagonist knows they’re doomed, but keeps trying to escape their horrible fate because there really is no alternative course of action. This is also echoed in the official press release, which describes the music as a “constant dialog between life and death.” 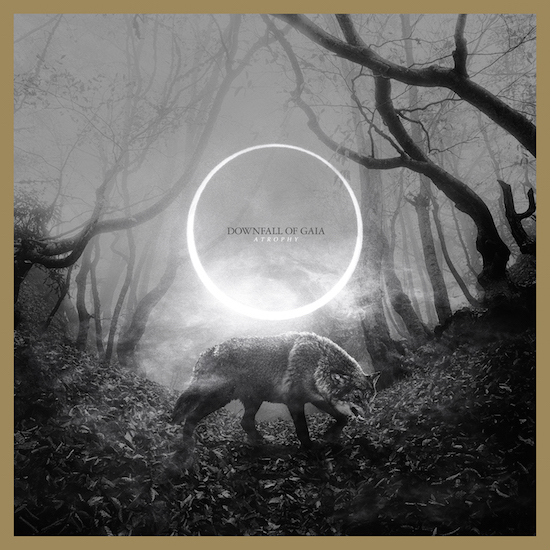 Sadly, this wonderful anxiety is slightly spoiled by the drumming: Michael Kadnar is undeniably skilled, but the complexity of the drum work occasionally overpowers the ensemble effect of the whole output. ‘Brood’ and ‘Woe’ both fall victim to this jarring effect, but by the time ‘Ephemerol’ and ‘Ephemerol II’ come around, the mix is perfectly balanced again. I do wonder if the effect isn’t intentional – like a purposeful disturbance – but it still remains slightly off-putting.

Atrophy is a beautiful selection of music, at once visceral and deeply atmospheric. But it is not an easy album to listen to. There is so much tension and complexity that it becomes exhausting to absorb it all effectively. That said, its evocative, soaring ambience does allow it to drift into the background as a slightly melancholic texture if you aren’t up for paying one hundred percent attention to its world-weary message. If you are willing to delve deeper, however, it is a rewarding exercise: as the last keys of ‘Petrichor’ ring out into oblivion, you realise that you aren’t alone, that you will have equally disgruntled company sharing your relief as the world eventually does collapse around you.

FOOTNOTES
1. A band Downfall of Gaia have played with previously, including a co-headline spot at 2015’s ‘There’s No Tomorrow’ Open Air Festival.
2. On a less serious note, Curezum (https://soundcloud.com/curezum) have made some really solid second-wave black metal covers of Cure songs. ‘A Forest’ or ‘100 Years’ are great examples.
3. The official video – a suitably woodsy, black-and-white affair – can be viewed here.