Trending
You are at:Home»Reviews»Metal»Dream Theater – The Astonishing
By George Parr on January 27, 2016 Metal, Reviews
Band: Dream Theater
Album: The Astonishing
Record label: Roadrunner
Release date: May 29th, 2016
Website & Facebook
Purchase/Download
Act 1:
1. Descent of the NOMACS
2. Dystopian Overture
3. The Gift of Music
4. The Answer
5. A Better Life
6. Lord Nafaryus
7. A Savior in the Square
8. When Your Time Has Come
9. Act Of Faythe
10. Three Days
11. The Hovering Sojourn
12. Brother, Can You Hear Me?
13. A Life Left Behind
14. Ravenskill
15. Chosen
16. A Tempting Offer
17. Digital Discord
18. The X Aspect
19. A New Beginning
20. The Road to Revolution

With the current buzz following the release of Star Wars: The Force Awakens, sci-fi and fantasy are back in the mainstream. So, what better a time for prog metal superstars Dream Theater to release their 13th album The Astonishing? Similar to Star Wars, the 34-track concept album follows a group of rebels fighting an oppressive regime – one that has outlawed music – in a style similar to legends Rush‘s famous album 2112. Already an ambitious enough feat to attempt, The Astonishing also marks Dream Theater’s first concept album since 1999’s critically acclaimed Metropolis Pt. 2: Scenes From A Memory.

Whilst a concept can enhance the immersive experience of listening to an album, seldom do bands truly delve deep enough to make you feel like the story is as important as the music. Dream Theater succeed here, with frontman James LaBrie taking on the role of multiple characters and giving a heartfelt performance. Drawing from his experiences on Ayreon‘s The Human Equation, LaBrie’s performance recalls the role of an actor as much as it does a musician. As LaBrie sings lines like “I shall give him a better life, I swore this vow to my dying wife” on ‘A Better Life’ you hear the heartbreak in his voice, and genuinely feel for his loss as if it were real. In terms of story, The Astonishing is, for lack of a better word, astonishing.

The true depth of The Astonishing is too complex to gather over one listen, but enough of the Queensrÿche-meets-Rush template – for which Dream Theater traditionally were known – is in place to make the album an instant hit. Songs like the heavily-Rush influenced ‘The Gift Of Music’ or the momentum-building ‘A Life Left Behind’ remind of classic Dream Theater to keep the interest of those that see only the lunacy of a two hour concept album whilst the story grows on them – and it will.

‘Digital Discord’, ‘Machine Chatter’ and ‘Power Down’ display the evil sounding drone-like noises of the robots that control the music in this universe’s dystopian future, whilst the rest of the album cleverly juxtaposes this through its use of more traditional instruments. From the full orchestra to the unconventional instruments, The Astonishing is carefully constructed to reflect its story; be it the strangely fitting bagpipes of ‘The X Aspect’ or the orchestral strings of ‘Brother Can You Hear Me’, these elements not only reflect the story, but help tell it. 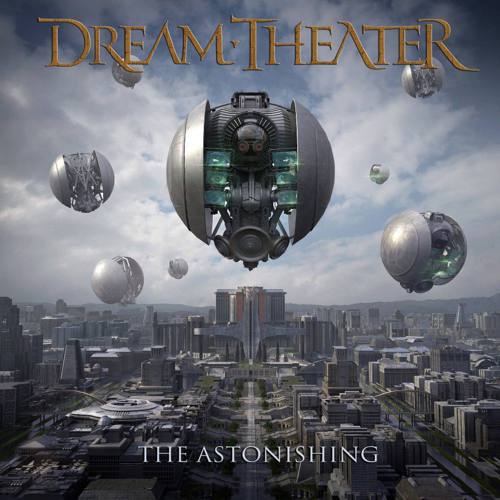 This album may be one that relies heavily on a large degree of showmanship and theatre to an almost melodramatic extent, but Dream Theater are restrained in their approach, showing off only where appropriate for the story, such as the impressive guitar solo of ‘Our New World’, or instrumental track ‘Dystopian Overture’, which very much introduces the album and its concept through its grandiose scale.

This large scope works as a brief trailer of the album’s highs and lows, which are set out over two acts. The first act is the longest with 20 tracks, and could work in an album in its own right – a feature lacking from a surprisingly large amount of so-called ‘double albums’. Act 2 is largely heavier and therefore naturally a tad darker, aside from a few tracks like ‘Begin Again’, a song with a vocal melody that reminds more of Westlife‘s ‘You Raise Me Up’ than a Dream Theater song.

Though the madness of The Astonishing can be hard to wrap your head around, its cohesive and captivating two hours is worthy of full praise. With one of the most convincing performances of one of the richest stories you’ll find in a concept album, it justifies its 34 tracks and makes you wonder whether it could follow the likes of Green Day‘s American Idiot or The Who‘s Tommy onto the big stage. There’s a line between anthemic and overdramatic, and whilst Dream Theater sometimes stray into the latter, they have done well to create a gigantic-sounding album driven by a well-defined story with a great degree of detail.