Trending
You are at:Home»Interviews»Enemies: “Pop music is the real math rock.”
By Joshua Hall on September 7, 2016 Interviews

Sheltered from the wind and rain at Bristol’s ArcTanGent Festival [review here] – in a barn containing haystacks galore – I sat down with Irish math rockers Enemies, whose attention to detail and occasional double-drummer ways [1] have put them heavily in the spotlight of polyrhythmic, pseudo-instrumental, time signature shifting acts.

But since 2013’s Embark, Embrace, the last three years of Enemies’ existence have brought a change to the band’s musical approach: “We’ve learnt to groove more!” says enthusiastic bassist Mark O’Brien. “We’ve learnt to simplify our music, and not throw so much at every part of every song. When we started this band, we were definitely leaning towards “Oh, this is so complex! This is so layered!”. We’re way more into stripping things back now, and focusing on nice hooks.”

The importance of space in music is something that Enemies have begun to embrace. Unlike many of math rock’s superfluous and musically over-zealous ways, Enemies have sought maturity in the ability to create room. “I think that’s an incredibly important thing to learn in music – regardless of what genre you’re playing – is being able to create space,” says guitarist Lewis Jackson. “It’s such a hard thing to do, and a hard thing for it to sound confident and good, and to know that you can just sit back, like, “Oh I’m not needed in this moment”. That’s something we’ve definitely learnt since the last record.”

Conversation soon turns to the festival itself. Being their second time gracing the stage of ArcTanGent, the duo were quick to describe their love for both the math rock scene and the festival: “[The UK math-rock scene] has always been incredibly welcoming to us,” says Lewis happily. “It’s a very easy place to meet people, and everyone’s very open.” Regarding the festival, Mark mentions how it helped his performance: “Because it’s so accommodating, you feel so much better getting onstage and performing. You don’t feel like an employee who’s come in to do a job and get out. It makes a huge difference.” “It’s a really beautiful festival,” adds Lewis. “It’s crazy how many of our friends are here. We keep bumping into people.”

Having just finished recording their new album, both Mark and Lewis seem relaxed, and invigorated. A stretch of “ten- to eleven-hour days, Monday to Friday” of recording, and friends and family concerns (“they would ask us “are you STILL in that studio? Are you losing your mind?!””, Mark exclaims) means that, free from this process, they were nothing short of excited to speak about the record. “We all dedicated time to it because we thought that it was that important to do,” says Lewis.

Mark elaborates: “It wasn’t even a career-driven decision, in the sense that we were like: “OK, we need to stop working now and just work on this record because we’re gonna be huge.” It was more, “We’re gonna stop working because this means an awful lot to us, and I wanna give this the best shot possible, for this record to be the best that we could make it””.

In true DIY aesthetic, the four-piece’s approach was that of creating music for themselves. Lewis said: “Predominately the first initial gut feeling is for ourselves. We try not to let the exterior in of “What would people think?” and “Are we trying to make this for someone else?”, because the minute you let that in, you start to shape your music in a way which I personally think is counterproductive.” 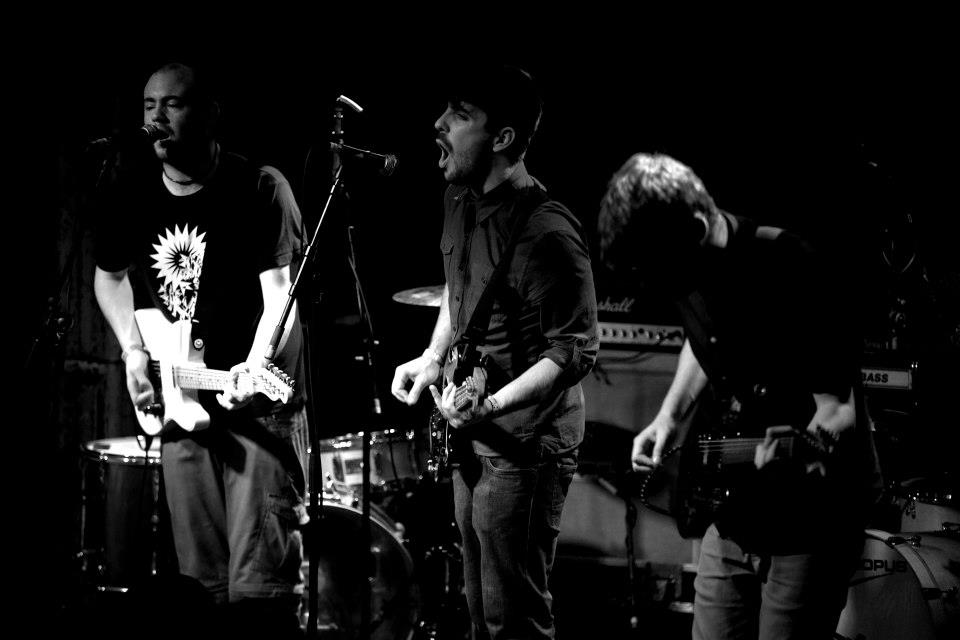 Enemies’ vocal style of catchy, little phrases – chant-like anthems – was one of the band’s most distinctive features. However, in the three years since their latest release, the band’s new-found way of creating more space in their music has given them access to use vocals more.

Mark takes the lead here: “We don’t want to just repeat a formula because it’s expected of us. If we listen to, say, a lot of electronic music that has an emphasis on vocals, we want to find a way of interpreting that into our sound. There’s vocals on most the tracks – but it’s not like Adele! [laughs]. The music is still not written around vocals, but we’ve left a lot of space for them – in mind – on the new record.” Lewis follows up: “It’s like being able to have this extra tool, this extra instrument to mess around with. The more Mark and I got comfortable with singing, the more we wanted to use it. It’s like having an extra member of the band; we have someone adding to this in a way we couldn’t previously do.”

However, they are not afraid to cling to their new-found love of pop-music, introducing how they saw pop music as being something they’ve learnt from the most. “Pop music is the real math rock,” claims Lewis. “It’s far more difficult.”

“That’s something that’s changed over ten years, is we actually love catchy disco hooks or pop or RnB,” says an excited Mark. “We were literally screaming Taylor Swift at the silent disco the other night. Screaming into each other’s arms. That’s the real technical music!” he says with a laugh. “It’s so hard to write a hook that’s going to stick in people’s heads for two days after they hear it.”

Mark then speaks of how learning covers for a friend’s 21st birthday was a turning point for both him and Lewis’ musical and songwriting knowledge: “We actually took five pop songs: it was ‘Hey Ya’, ‘Backstreet’s Back’, ‘Girls Just Wanna Have Fun’, ‘My Sharona’ and ‘Just A Girl’. And we learned more learning those five pop songs, about musicality and technicality and weird chord/key changes than we would ever had learned otherwise.”

As the rain started to clear, I’m excited about their set later in the day. The giddy duo are not only passionate, level-headed and mature musicians, but also full of charm and wit. “We’re going for an Irish Christmas number 1!” Lewis jokes, interrupted by Mark’s comment of becoming “the first commercially successful math rock band.” It was a lovely fifteen minutes – with numerous ramblings about the strength of Madonna’s songwriting, to the love found when screaming Tay Tay’s lyrics to your mates. Enemies are a band that are as exciting to meet as to listen, and with their new album dropping around December time and – a special Dublin gig to celebrate – I couldn’t be more excited for them. 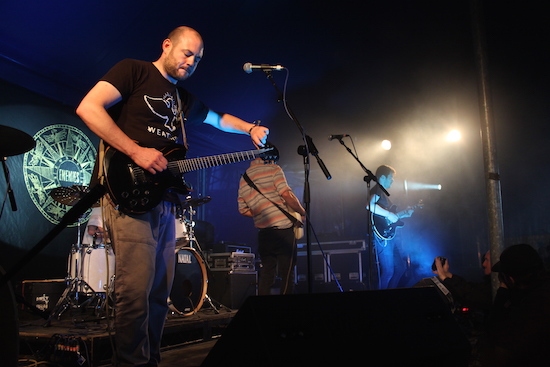 Our thanks to Lewis and Mark for their time, and Will for the opportunity. Go like Enemies on Facebook.