You would be forgiven for thinking that Polish metal group Entropia were in fact an obscure occult group masquerading as a band. The band – simply detailing their lineup as ‘U, L, T, R, A’ – condemns anyone who opposes their ‘psychedelic vision’ [1], while the artwork displayed on this new release Ufonaut depicts a grotesque tentacled monstrosity courtesy of artist Kuba Sokólski. Clearly pulling heavily from a vein of black metal, their music is fierce, though there’s also an unmistakable influence coming from psychedelic rock music; many of these lengthy song structures also carry the sporadic tendencies of modern progressive metal. With an ambitious sound, Entropia add fuel to the fire that is Poland’s metal scene, the same place responsible for spawning acts like Mgła and Outre.

Right from the get-go, the opening track ‘Fractal’ almost recalls a black metal-tinged Mastodon’s Crack the Skye; featuring a highly progressive structure, the introduction to the track itself quickly alternates between slow, lumbering riffs and blast beat-fuelled tremolo picking. Other moments throughout the album carry a grandiose nature; the majority of these multi-faceted tracks continue past the 6-minute mark, and soaring tremolo-picked guitar leads lend a sense of grandeur prevalent in the band’s previous album Vesper. Moments like the middle section of ‘Paradox’ feel so emotionally heavy that the effect is transcendental, though this moment of serenity is followed immediately with a wildly chaotic and aggressive closing section, synthesisers buzzing behind the synchronised pounding of guitars and drums. Smaller touches like this subtle inclusion of extra instrumentation, as well as the sitar on ‘Mandala’, are what form this album’s psychedelic side, in more of an aesthetic sense than anything else. 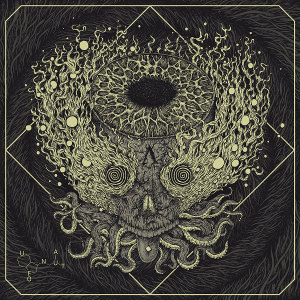 The production on this album provides the ideal sonic landscape for these ideas; a refreshing factor of modern black metal acts is how much denser the guitars can be mixed [2], often opting for a deeper and heavier sound as opposed to the typical treble overload of their Scandinavian forefathers. Entropia also leave adequate space in the mix for the bass guitar to remain prominent, utilised especially in the second half of ‘Apogeum’, front-and-centre in front of walls of distortion. The vocal performances strike a perfect balance between shrill caterwauls and forceful yells, and with added reverb the already unintelligible lyrics become part of the swirling vortex of this album. While so much of this album does rely on chaos and intensity, the closing track ‘Veritas’ features a gorgeous ascending tremolo-picked reverb-heavy guitar lead with an appropriate feeling of finality to it.

Many black metal artists make a great effort to sound ‘atmospheric’, but often fall short when it comes to lengthier song structures, either lacking in variety or novel ideas. Entropia’s sound is essentially a new take on the tried-and-tested harshness of black metal and the grandiosity of progressive metal, but in combining both with this dark psychedelic aesthetic, Ufonaut is a true amalgamation of intensity and intricacy. In a subgenre now thriving in eclecticism, Entropia took the space they had and made something truly creative. A powerful blend of texture, structure and tone, Ufonaut is above all else an entrancing record.

FOOTNOTES
1. Entropia’s Bandcamp page states their opposition “against all those opposing the psychedelic vision”.
2. Records such as Winterfylleth’s The Threnody of Triumph (2012) or Misþyrming’s Söngvar elds og óreiðu (2015) come to mind as black metal with a bit more meat on the bones.