I am continually delighted by metal’s ability to challenge us both sonically and intellectually; surely no other genre of popular music draws on history, literature and science so deeply. In the case of Swedish death metallers Evocation and their latest album The Shadow Archetype, this album’s Jungian title reference is more than a mere token – the twin themes of latent evil and denial of responsibility are developed throughout the record. The Shadow Archetype is one of the four basic elements of personality defined by psychoanalyst Carl Jung in the 1930s. The Shadow is the dark, troubling archetype, present in all but denied by most, as we project our moral weaknesses onto others and create a veil of illusion between the ego and the real world.

Evocation also draw on psychologist Stanley Milgram’s famous 1960s experiment, ‘Obedience to Authority’ [1] and Milgram’s voice is even sampled, to chilling effect, on the album’s title track. Milgram’s conclusion, that all humans are capable of committing evil acts by complying with authority, will be forever relevant; but is Evocation’s new album relevant? It has become a cliché to say that the Swedish death metal scene is saturated, but it’s true – there are so many identikit bands on the market that something different is needed to stand out from the crowd. Evocation have gone a long way to achieving that here; The Shadow Archetype is a very accomplished album, with a few hints of innovation, and I’m interested to see what the next few years bring for these Swedish death stalwarts.

Evocation have had a chequered past, and consequently haven’t reached the upper echelons of Swedish metal stardom. Formed in 1991, they released two demos which were cult hits, but then split in 1993 over creative differences. After a massive twelve-year hiatus, they reformed in 2005 and several acclaimed albums followed, although a major line-up change in 2013 almost ended the band for good. [2] Fortunately they decided to plough on, with guitarist Marko Palmén and vocalist Thomas ‘Tjompe’ Josefson giving the band sonic continuity. Evocation have always straddled the Gothenburg and Stockholm scenes, blending the Boss HM-2 ‘buzzsaw’ sound with more melodic elements, and The Shadow Archetype continues in this vein. However, there are new and thrashier aspects to the sound now, in part due to new guitarist Simon Exner, who co-wrote the music with Marko and brings a more new-school, technical feel.

A huge amount of care has gone into this album, which has been in the making since 2015. From the meticulous engineering (recorded in three different studios) to the track listing (representing a dark psychological journey) to the cover art (by Xaay, of Behemoth and Nile design fame), this is Evocation’s most polished release yet. But the polish doesn’t reflect the mix which, while clear and even, is still plenty raw and gritty enough, which I much prefer to some of the too-slick melodic death nowadays. 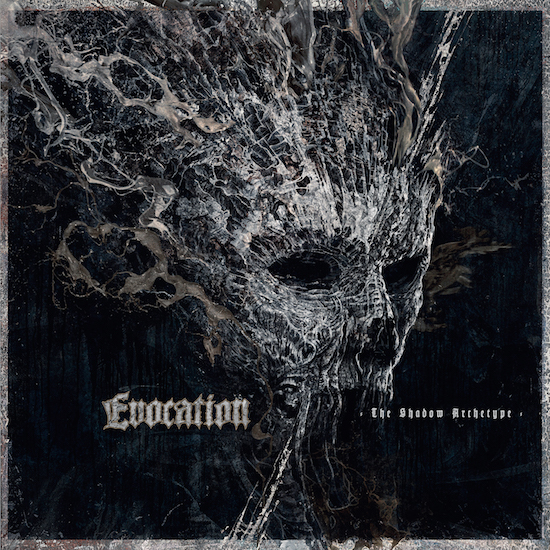 A short cinematic interlude (‘Into Ruins’) sets the tone for the first track and (personally) the album’s masterpiece, ‘Condemned To The Grave’- its chorus is anthemic and immensely satisfying. Yes, it sounds a lot like Amon Amarth, but that’s a compliment. Evocation are not afraid to be a little accessible, and in this song they use tricks such as unexpected silences and vocal doubling for those ‘hair-on-the-back-of-the-neck’ moments.

‘Modus Operandi’ has some interesting chord progressions and meter changes, with pretty harmonised thirds in the mid-section, although it seems to run out of ideas towards the end and trail off into the next track, ‘Children of Stone’, without warning. However, Evocation mostly avoid the common death metal problem of tracks bleeding into each other meaninglessly. They frequently change the pace and break up the album half way through with a thoughtful acoustic interlude (‘Blind Obedience’) reminiscent of Metallica’s slow numbers.

Palmén has said that ‘The Coroner’ is his stand-out track [3] as it’s down-tuned to A-flat (the rest of the album is in B-flat tuning), although I found it a little saturated with sound. There is a filler or two – ‘Sulphur and Blood’ doesn’t do much, its solo lacking effort. But this album contains some great ideas which demand multiple listens; some beautiful arpeggios in the title track, for instance, and some wonderfully poignant rising chords in the brutal ‘Survival of the Sickest’.

Evocation’s new line-up sound tight, with each musician firing on all cylinders and no-one taking the glory. Thomas’s vocals are the strongest and most passionate they have ever been, while session drummer Per Møller Jensen (of The Haunted) adds some groove elements and confident smatters of blast beats. Having just signed to Metal Blade and with this new album to tour, it’s going to be an exciting year for the band. I feel they are still holding back, a little cautious with their new musical ideas as they loyally straddle the two camps of Swedish death metal. They are on the cusp of something, and I look forward to seeing them develop their sound even further. Now if you’ll excuse me, I’m off to brush up on my Jungian psychoanalysis.