Trending
You are at:Home»Interviews»Falls: “Our live shows developed from years of being bored onstage.”
By Joshua Hall on September 19, 2016 Interviews

During my time at ArcTanGent, I did what some would deem unforgiveable… watching a band that wasn’t Toe, at the same time that Toe were playing. Shocking, right? Well, not really, as stipulated in my review [here], where I had infinitely more fun watching self-defined ‘fuck-rockers’ [1], Falls than the Japanese guitar-tappers.

Falls aren’t tame musicians. Known for their wild and unpredictable stage manners – shirtless, drunken and ecstatic – the four-piece regularly get bare-chested and sweaty at every show, engaging their audience by becoming part of them. As bassist Ben Griffiths said into our interview, “Every time we write, I wanna be able to listen to this as a punter and go ‘I fucking love this, this is for me.’”

Going back to the beginning, Falls’ have always been about having fun. Having been friends for a long time, the four-piece’s fruition was an easy one. Ben mentioned that he previously left an “epic Biffy Clyro wannabe” band, before then getting together and jamming. Frontman Martin Gallagher claimed that the situation involved drummer Steff Jones asking him to jam, and the rest was history: “I was like “OK, Stef, let’s jam”, then [guitarist]Phil Kelsall came in, and he was like *makes widdly noises* – I was like ‘What the fuck is this?!’ And then we made it work, I wrote something in the middle, ( the song being ‘Death In Disco Shoes’), where I wrote the riff for that. We stamped it straight away. We were gonna be fucking mental, but there’s gonna be partying as well.” 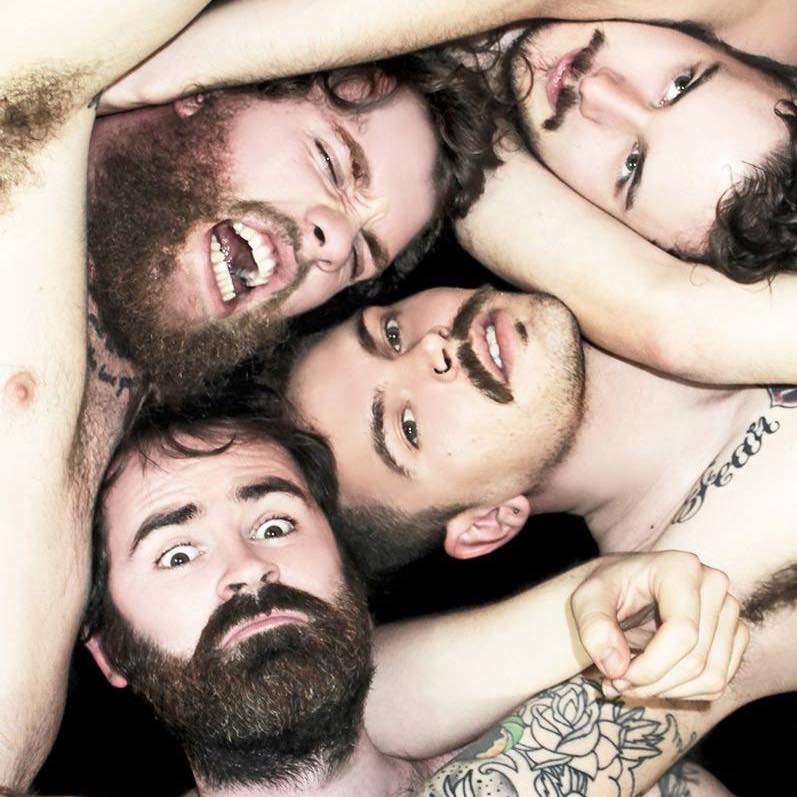 Ben pitched in how he got involved; “I remember the first time you guys asked me about it. We’d always said we need to start a band, I’d been in bands with Stef for as long as I can remember. When Phil first messaged me about the band, the line I remember vividly, is “D’you wanna have a jam with me, Martin and Stef?” and I was like “Oh cool, what kind of stuff is it?” And you were like ‘We don’t sit down to practise.’ And I went ‘Ah yeah, I’ll see you on Saturday’. Always a good vibe from it.”

Falls’ ArcTanGent performance was thoroughly manic, with the concept of a barrier for the audience completely pointless. But the band’s shirtless antics were not always a staple of their performances. “The reason we play topless is that we did a gig at South Sea Festival a couple of years ago, and the room was like breathing in gravy,” laughed Ben. “So I just turned to them and I said, ‘I’m gonna have to take me top off.’ Since then, we’ve gone on and we just keep our tops off.” Phil jestingly adding, “that way, you don’t need a spare T-Shirt on tour, you can just keep the same one on!”

Ben states that Falls’ live shows “developed over years of being bored stood onstage. What we’re doing is having a laugh. We’d do this anyway even if we weren’t holding guitars.” Martin added; “From the start, we always did silly things. We played hardcore shows in pink shorts. We always just took the piss.” Phil again jokingly intruded; “I like to pretend it’s subversive and has a deeper purpose, but we’re just having fun.” 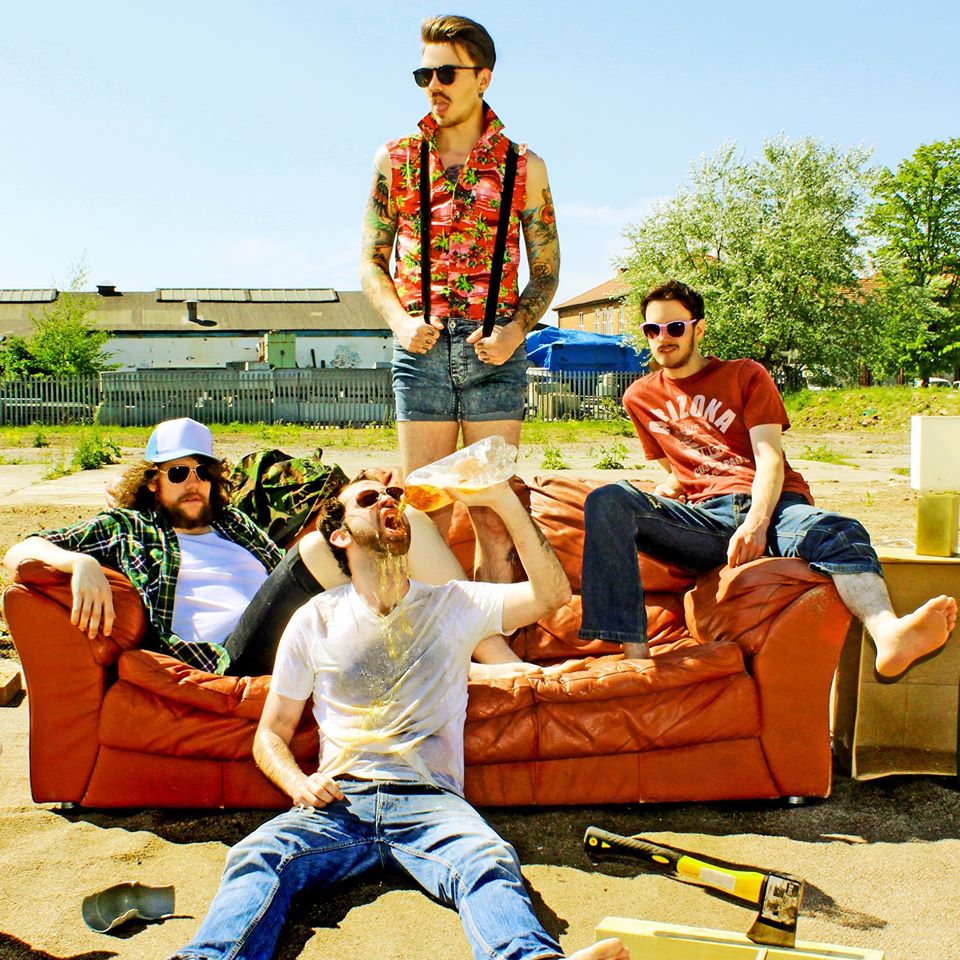 “We’re just doing what we want because it’s funny,” said the bassist. However, the band’s almost hard-to-pin-down sound (“genres are fucking bullshit anyways,” claims Steff), mean that sometimes their party antics aren’t always accepted the way they’d like. Ben recalls a particularly unpleasant story: “When we first started, we’d get booked with hardcore bands, and, uhh, immediately we’d take our T-shirts off with these pink shorts and two thirds of the room would empty.” Phil added: “The dichotomy is it depends what shows you’re on. It shouldn’t be that hard, but it’s difficult to book us a show. It took us a while to find bands we could be put on with. We’d get booked with a metalcore band, or an indie band, and then a punk show. It’s difficult, but that’s why we do it. Just be in a band and play some music – see what happens.”

Since becoming shirtless, I presumed that this confidence may have brought upon an aggressive change to their music. However, instead, the heaviness has made them become poppier. “With the new stuff we’ve been doing, we said to each other ‘This song is so poppy, we have to make this bit really heavy.’ We try to be as heavy as we are poppy.” said Ben. Phil added; “I think if we can be the heaviest pop band, that’d be a decent thing to aim for.”

The band then went onto discuss their love for pop music; “It’s hard to construct [pop music], and people get really elitist about it, because of the way it’s packaged. Because you are sold Bieber or Taylor Swift or Carly Rae Jepsen or whatever, some people just completely ignore the songwriting process and the fact that there’s brilliant hooks,” said Ben, before jokingly adding; “I know most people are idiots but statistically not everyone can be an idiot.” Adding onto this, frontman Martin mentioned that “If you don’t like Jason Derulo‘s ‘Kiss The Sky’, you are a fucking idiot, regardless of how it’s packaged. It’s fucking incredible,” before Ben added “Nobody doesn’t like ‘Uptown Funk’. When I first heard that, I was like ‘Fuck, I wish I’d written that song!’”

We moved onto the band’s music videos. Back in May, the band released an 80s-inspired ode to the winning days of BBC’s Top of the Pops, propping their single ‘Get Well Soon’ against video footage of the band half-dressed, surrounded by balloons and highly contrasted imagery. “We just like balloons,” said Ben. “We used to have balloons as a backdrop but then it just became unfeasible and expensive. We used to have balloons with each letter printed on it. But for the music video, we got a videographer called Giannis Kipreos [2] and he’s brilliant. Because he’s seen us play a handful of times, he also filmed us live a couple of times. So he knew what we were about, and he just translated that into something that looks like we’re doing Bananarama/Top Of The Tops 1984.” But not all was hunky-dory; “He got us in the coldest warehouse in the fucking world for twelve hours!” said Martin in indignant rage.

With ArcTanGent being an undisputed king of friendly festivals, it wasn’t long before some love was given for another band performing at the festival; “Axes are one of my favourite bands. Yeah it’s mathy, and yeah it’s bloody hard what they do, but there’s always a massive hook just round the corner,” said Ben, enthusiastically. “These guys had never seen them before, and I just kept nudging them going ‘You’re gonna like this bit!’ – I must have been so annoying. They are so much fun to watch, they just look like they’re having the best time, and that’s what you should be doing.”

Falls were as fun to talk to as they were to see live. With jokes about Animals as Leaders being “harrowing for someone who doesn’t play guitar like they do,” and the band refraining from speaking about lyrics due to “the legal division of Falls Ltd. refusing to answer,” (Martin claimed that the only time he wrote lyrics for other people is “when he’s slagging them off”), it was an absolute laugh. I must advise anyone in the UK to catch Falls whenever they can. They have a fantastic sense of humour, and are willing to party, with ‘no’ being an answer they do not take kindly to… unless, of course, they want to stay away from defaming someone.

1. Yes, that is how they refer to themselves. Source: Facebook page.

Thanks to the band for their time, and James/Matt for the opportunity. Check out Falls on Facebook and Bandcamp.