When a band describes themselves as “ignorant music for the educated man” and their influences as “Down syndrome, deafness, beers, and heatwave”[1], you know you are dealing with a band that defies categorization – or at least is defiant against it. Fange has been labeled as blackened doom, harsh sludge, Swedeath (despite not being Swedish), d-beat, and noise, and none of these are wrong. A French quartet, they are made up of musicians from bands (both defunct and active) of varying genres, such as Calvaiire (metallic hardcore), Huata (occult doom), and Zalhietlzi (noise/ambient). With only two EPs and a full-length under their belts, their marriage of harsh noise by co-vocalist Jean-Baptiste Leveque and extreme metal influences continues to evolve and become more aggressive. And now their upcoming release and second full-length LP, through Throatruiner Records (who seemingly can do no wrong at this point) and Lost Pilgrims Records, Pourrissoir (which translates to “retting” [2]) is a further testament to that.

To give an idea of the eclectic genre-switching in Pourrissoir, the first track, ‘Parmi Les Ruines’ (‘Among the Ruins’) starts with an Entombed-inspired D-beat/Swedeath groove that descends into sludge, followed by a noise interlude that gradually picks up the pace back into the groove. Feedback layered with electronic grumblings bridges the first two tracks at the beginning of ‘Agapes’ (‘Feasts’). No two tracks are like here; ‘UltraFrance’ and ‘Vore’ are noise tracks (the former industrial-inspired with a drum machine) and ‘Les Gémonies’ (‘The Obloquy’), is its longest and slowest of echoing sludge-doom. The ending of the closing track ‘Ressac’ (‘Backwash’) evokes a black hole collapsing into itself, with the final words a collective “qu’une parodie d’une parodie” (“a parody of a parody”). 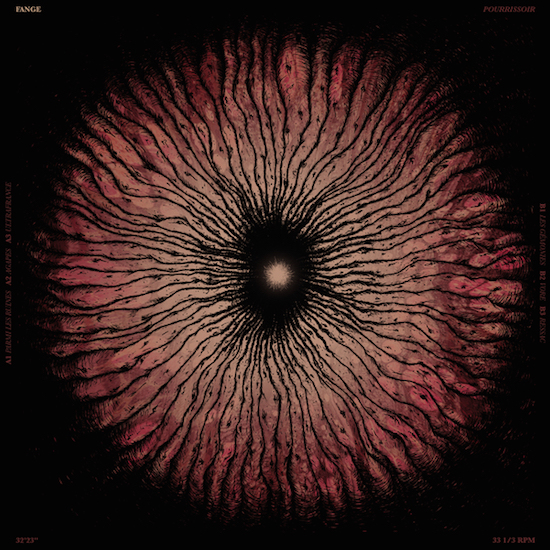 Co-vocalist Matthias Jungbluth’s [3] lyrics partly deal with human filth, bodily fluids, and generally disgusting topics. The lyrics of the intensely ominous track ‘Vore’ – “Never satiated/I only stop when I’m sick/Flesh, blood, shit/Semen, bones, spleen” – is coupled with layered sounds of gagging and nauseous screaming, resulting in an effectively sickening listen. But there is another dimension to the lyrics, describing the collapsing of French civilization. ‘Parmi Les Ruines’ and ‘Les Gémonies’ speak of leaders selling empty promises to a dying country living in its own filth (“Picked up at the foot of the podium/Crowned with defeat/Your place is acquired/In the pantheon of the vanquished” [‘Les Gémonies’]). ‘Agapes’, ‘Ultrafrance’, and ‘Ressac’ express the hunger and hopelessness of the French people, living in an endless historical repetition of falling empires that is doomed to eventually exterminate itself with the rest of the human race (“It is the eternal return/Up to decrepitude/No cycles, but spirals/As everything is a parody of a parody” [‘Ressac’]). Bits of noise even accentuate these themes; the electronic grumblings of ‘Agapes’ suggests hunger pains, and ‘Les Gémonies’ features the sound of a squeaky spinning wheel, evoking a ‘wheel of time’.

Fange once described their sound as: “If Nihilist would have played sludge on Sunn amps with Merzbow as special guest, it would have sounded like Fange.”[4] Although this was said around the time of their very first release – the EP Pouisse – this is still very true. But only a mere three years later, the band’s influences have been utilized to even greater effect with each release, building upon the foundation they have laid. Their ultimate goal seems to create an oppressive listen, and they have exceeded with this album. Taking subject matter that could have easily been simply gross and disgusting, they have injected it with nihilism and political implications. Noise maintains a presence in every song, whether its bluntly loud and harsh or subdued and complimentary to their blend of extreme metal influences. With these aspects in sync, it does indeed make their music ignorant for the educated man. Pourrissoir is an overall abrasive experience and we don’t expect the sickly beast that is Fange to hold back or soften anytime soon.

Footnotes:
1. Taken from the band’s Facebook page
2. Retting is the process of partial decomposition, used for instance in preparing flax.
3. Co-founder of Throatruiner.
4. From an interview with Doomed To Darkness