Post-rock as a genre has given us a plethora of bands that create complex soundscapes that wash over the listener in a wave of gorgeous, layered music. It is equally awash with bands that amount to little more than cheap imitators of bands like Explosions in the Sky or God Is An Astronaut. It is also, like much of metal and rock, a Western-dominated genre. So it was with great interest that I plunged into Southern Skies Motel, the second offering from Indian post-rock outfit Farfetch’d.

Farfetch’d is an intriguing proposition for two reasons: first, it is the moniker of solo artist Akash Murthy – rather than a full band – and secondly, he successfully eschews more complex soundscapes for simpler compositions while avoiding comparisons to a cheap Explosions In The Sky rip-off, and without losing any of the beauty and depth in the process. He has created an album of shorter, simpler works, themed around a journey through space, that still tug gently on the heartstrings and wash over listeners.

Take ‘This Incoherent Pale Sky’ as an example. Starting softly with some delicately plucked guitar strings, and moving into one of the rare vocalised moments on the album, it soon cocoons the listener in a warm number that could be the soundtrack to floating high up on Cloud Nine. Moving through a gentle piano motif, skilful tabla playing begins at the 3:10 mark, underpinning the song until all the instruments fade out to let the piano come to the fore. It’s a beautiful piece, and neatly shows of Murthy’s composition skills. The ending, however, lets it down: the final piano refrain is repeated and detuned and pitched down in a spiralling fashion that would sound more at home in a Tim Burton film. 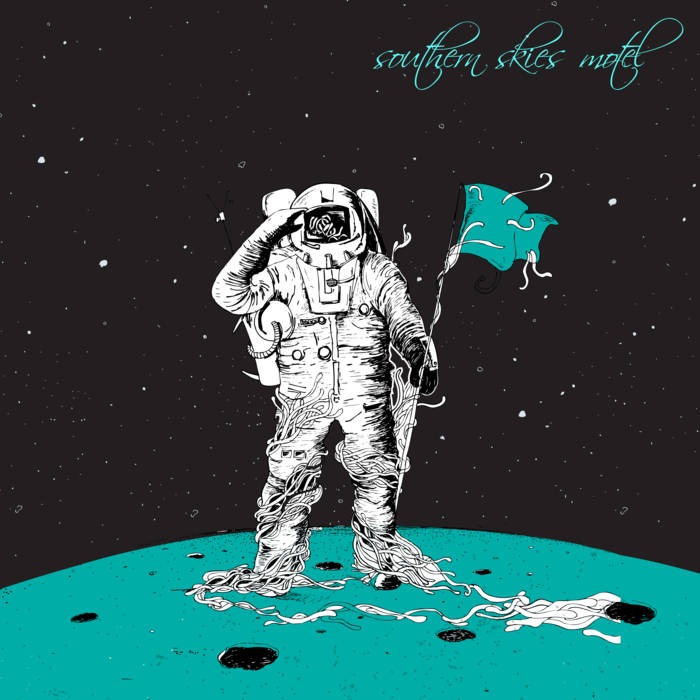 However, following immediately on is the album’s crowning glory ‘Moonshine’, which slowly builds into a glorious, spine-tingling crescendo. Layer upon layer is added to the opening guitars, until the listener is completely swept up in a rousing paean to the ethereal beauty of moonlight. Just before the climax at the four-minute mark, all falls away in favour of the guitar, and each additional layer is then touched upon again as the song fades out. It’s the closest the album gets to a true post-rock epic, and I truly believe that if there was more music like ‘Moonshine’ in our lives, we would all be happier people. It is, simply put, one of the most genuinely uplifting and optimistic songs I have come across.

I’ve mentioned before that second albums can be tricky to pull off, but Murthy does this with aplomb. Southern Skies Motel is as much a progression of his art as it is a different beast from his debut The Alchemist. The debut is much closer to traditional post-rock and, in songs like the title track, sounds much more like Explosions in the Sky, while Southern Skies Motel has a much more pronounced sense of its own identity. Murthy is more confident in exploring the possibilities of post-rock on Southern Skies Motel, more capable of delivering unique compositions that are entirely his own, owing less to his influences.

This is not to say the album is not without its awkward moments. ‘Collide’ may be a pretty little love song, but it’s a tad too simplistic overall, and could be taken out without detriment. Openers ‘The Lunar Observatory’ and ‘Bastion’ show off Murthy’s skilful guitar technique, and while the latter has an easy, campfire-song feel to it, it sounds very close to Rodrigo y Gabriela’s style, almost too close for comfort. While Murthy and the duo teaming up would be a fantastic aural collaboration, the similarity is a little awkward here.

Ultimately, Southern Skies Motel is a wonderful second album. The awkward moments do little to detract from what is, collectively, an intriguing proposition in the world of post-rock: a collection of joyful, simple, but by no means dumbed-down tracks that still wrap the listener in their embrace and refuse to let go.