Trending
You are at:Home»Interviews»Friday of This Burning Age: “I’ve always been fascinated at picking at the proverbial scabs.”
By Mark Angel Brandt on December 1, 2016 Interviews

Birmingham and dark music go hand-in-hand; something about the smoggy industrial city seems to infuse bands with a dirtiness, a grime and a penchant for the darker side of life. In this regard, This Burning Age are no exception, but there are many other areas in which they differ from the pack. Their dark, electronically-twisted rock form is not immediately unique, but takes on a taste of its own once you delve into their unique discography. Eschewing the album format, the band have thus far released three of a four-EP cycle, with each three-track eventually uniting for a full album. Their latest single, ‘Tatterdemalion’, provided a jump-off point for a conversation with frontman Friday, who illuminated the band’s inner workings.

‘Tatterdemalion’ is the heaviest song thus far in This Burning Age’s discography – though “‘Your Will Is My Kill’ and ‘Nothing’ might give it a run for its money,” Friday argues. “Those who’ve seen us live will know my performance can get a fair bit…animated (ha!) when I lose myself, and that definitely extends to my vocals.” Clearly the performance goes over well – the strangest compliment he’s received thus far is, “My sister really loved you and she only likes Justin Bieber.”

He also calls the phrase ‘heavy’ into question – what exactly do we mean by it? “I guess most people automatically think guitars, or guitar-based music in terms of what is or isn’t ‘heavy’, but I’ve always felt that was a quite limiting. For me, ‘heavy’ is aggression, pure and simple.” Whether it’s delivered by a four-piece rock band or one guy with synths is irrelevant – “if the end result feels like poison being spat into your ears, that somehow manages to lift you up while at the same time making you want to tear the human race a new one, then that’s ‘heavy’.” He names a few of the songs which he loves to destroy the world to, and the list is all over the place:

The video for ‘Tatterdemalion’ is a simplistic affair, but one which captures the raw emotion that Friday exudes when performing. “Carl [Shanahan, director] and I wanted a deliberately stripped down aesthetic for Tatterdemalion. We’d decided on the single fixed camera technique very early on, and as “light” is one of the main motifs in the lyrics it was important for us to address it on film.” The swinging light was an old and “fairly battered” work-lamp bulb from Friday’s art studio, and the video was pretty much done in four takes (“the ‘rawness’ of it was important to us”). Simple yet effective.

Friday is no doubt the driving force behind the band: “I write, record and arrange all demos and pre-production tracks myself in my own studio.” Most of his ideas are generated like with many artists – in the dead or night or the early hours of the morning – and then the cold light of day allows him to sift through them for the ones that show promise. “For me, the writing process is a solitary affair and that’s how I like it – it’s easier for me to lose myself and get under the skin of a track when I’m on my own with no distractions.” He is thankful, however, to be surrounded by other musicians. “For example, Jack [Josypenko], my drummer, was the first person I recruited to the band – we’ve known each other for years now and, like the other guys, he’s become a great friend. But on top of that, he knows me so well when it comes to discerning what’s needed for the rhythm sections. He’ll look at my bare bones drum parts and immediately know the right way to take them, maintaining the core ideas and the feel of the song but embellishing in ways I never could.” Producer Tom Gittins also plays a big role in the studio. “We’ve worked with Tom on each of the EPs and his input is invaluable. He understands how I write, the sound I’m trying to achieve and how to get the best out of all of us. He has an amazing ear for what sounds ‘right,’ and he’s one of the few people I’m comfortable with when he suggests swapping out parts or trying things a different way. Nine times out of ten he’s bang on the money.”

However, it’s the live shows where everyone gets to stretch their creative legs – “we’re all of the opinion that if you want to hear a band play tracks exactly as they’re recorded, then stay home and put on the record. I’m not saying you should fuck with tracks to the point they’re unrecognisable but, when we go to see bands ourselves, we love to hear that they’re actually live! Jon [Farrington-Smith, guitar], Chris [Locke, guitars/keys] and Dave [Bennett, bass] are each accomplished enough that they put their own creative “stamp” on the tracks in the set without losing direction.”

As alluded to in the introduction, This Burning Age play dark music and the lyrical topics match: ‘Drown in Silence’ on the latest EP references “a guide to your suicide”, for instance. However, dark topics are not necessarily the intention from the outset. “I never sit down, pick up a pen and think, ‘today I’ll write a dark song’,” Friday claims. “I guess my natural tendency is to lean towards the darker side of things as that’s what interests me. I’ve always been fascinated at peeking behind the curtain, picking at the proverbial scabs, seeing what makes us tick.” One of the main reasons for this is reflected in his own life, of which he speaks extremely frankly. At the age of twelve, he developed a particularly nasty and aggressive form of Crohn’s Disease. “My times under the knife can be counted in double figures, I’ve technically died twice, to date, on the operating table, stopped breathing once in the middle of an out-patient treatment thanks to anaphylactic shock, and during my many stays in hospital I’ve witnessed death first hand.”

His first experience with death was a harrowing one, at age 14. “I became friendly with another boy in the ward next to mine who’d taken an overdose of Paracetamol. He never meant to actually commit suicide, and he seemed pretty embarrassed by it all. I distinctly remember him having a slight black smear around his mouth from the charcoal mixture they were making him drink. We played Top Trumps in the afternoon in-between visiting times for a few days, until one day he didn’t show up. It was one of my nurses who told me he’d died. I didn’t know back then but I guess his liver failed – he was such a small, slight boy, maybe there were complicating factors, I don’t know. But that was my first experience of death taking someone I knew – not a pet or someone on the news, someone I knew. I’ve seen patients die in front of me on the ward a few times over the years, some quietly, some…not so much, but that first experience has always stayed with me.” These experiences, and his own health issues, make up an integral reason why he often finds himself “focusing on life, death and the human condition”, and it makes for an earnest and compelling listen – his performance carries emotional weight where the words resonate more strongly in light of this knowledge. 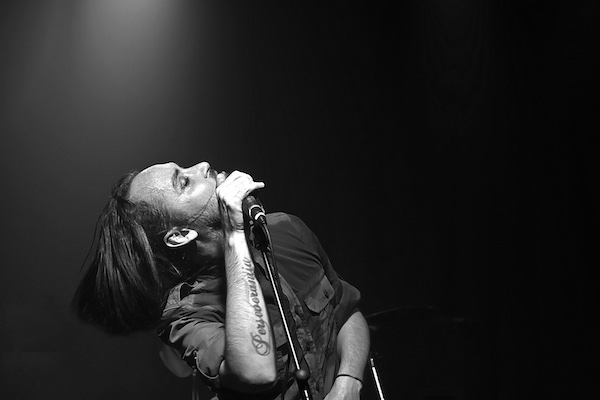 Looking at other areas that were influential, I prodded him for his list of writers that informed This Burning Age’s existence, a 101 Reading List if you will. “You just had to ask,” he responds with some hint of resignation, or maybe a warning of the deluge that hits. The list that follows is eclectic, familiar names such as 1984 and Stalker sit next to Unmaking Merlin and krautrock books… and Hellblazer. The full list is below:

– Sculpting in Time by Andrei Tarkovsky
– Stalker by Andrei Tarkovsky
– Roadside Picnic by the Strugatsky Brothers
– In the Dust of This Planet by Eugene Thacker
– The Cunning Man’s Handbook: The Practice of English Folk Magic, 1550-1900 by Jim Baker
– Transmetropolitan by Warren Ellis
– Dancers at the End of Time (Compendium) by Michael Moorcock
– Future Days: Krautrock and the Building of Modern Germany by David Stubbs
– 1984 by George Orwell
– Unmaking Merlin: Anarchist Tendencies in English Literature by Elliot Murphy
– Landmarks by Robert Macfarlane
– And the entire Hellblazer run up to Issue #300 “because…John Constantine.”

In terms of the band’s immediate plans, the future holds the fourth EP of the quadrilogy – details thus far unannounced – before the four EPs will be packaged up as a full album. So, which method does he prefer for musical consumption? “At the risk of sounding like a cop-out, I think they both have their merits. I chose the tracks for each EP deliberately, so that each EP would work both as a self-contained unit in its own right, and also within the context of the overarching concept. The track order for the final album will be very different from the order they’ve been released in for the same reasoning.” Expect EP04 to drop in the first quarter of 2017, with a special treat for long-term fans: the song ‘Conceal, “a live track that was a regular in our set for a long while, has finally been given the treatment it deserved and will be featured on the EP.”

Looking further ahead, Friday divulges a few goals for the next few years. “I’d like to have found management and a label that ‘gets’ what this weird little band is about, and who gives us the opportunity to make more records. Failing that, continuing to breathe in and out on a daily basis is just fine with me.” An honest and humble answer, and I for one hope they receive every success.

Our thanks to Friday for his time, and Dan for the opportunity. Check out This Burning Age on Facebook and their website.