5. Modern Youth of America
6. Real Enough For California
7. This is Real
8. After Party Status

A 2-piece band from San Francisco by name of Friends W/O Benefits attempt to wage a battle against technology by offering up a unique twist on a physical release. In this case, the accompanying comic is the physical release, the music being available freely as mp3s. Styling themselves as a product of Fugazi and The Blood Brothers, these two musicians “Cadet Edac” and “White Trash Ninja” deliver a minimalist noisy brand of punk, which recalls the jagged edges of their influences.

The lyrical delivery varies throughout the verses of each song; examples include a scattershot style reminiscent of Justin Pearson’s work in The Locust to a pseudo-rap on ‘Goin’ To Town On The City’, with an annoying “Uh huh” call-back in response to the vocalist’s lines. Immediately upon listening, the listener will be enveloped in the band’s overwhelming positivity. Simplistic musical arrangements, à la Pixies and Nirvana, pave the way for songs about ‘Post Apocalyptic Zombie Part[ies]’ and the ‘Modern Youth of America.’ Unfortunately, if it wasn’t for the riffs that form the verses and the infrequent forays into movie sound bites as intros, there isn’t really enough character in the songs themselves to differentiate between them. Fortunately, second track ‘Re-Enact The Basement’ bucks the album’s trend by giving a nod to the frenetic ska-punk of Less Than Jake in their heyday, crossed with the post-hardcore edge that this pair pride themselves on. It’s difficult to listen to this without recalling a band who ploughed a similar musical path, if more electronically-based, I Set My Friends On My Fire, whose two albums and singles with the comedy group Smosh offer up the same vessel overflowing with positivity and party vibes, but smarter and slicker lyrics and music.

The group genre-hop with their verse riffs, from ska-punk to country, unfortunately, this only furthers the monotony of the choruses, which truly could have been something interesting. Instead, this offering appears to scream “we can’t settle on a sound” rather than “look at what we can do.” This is a shame, because when the band kick into gear into one of many scream-along choruses, the result is that long-forgotten ’90s dive bar’ club atmosphere, where you almost feel connected to the band on a first name basis. 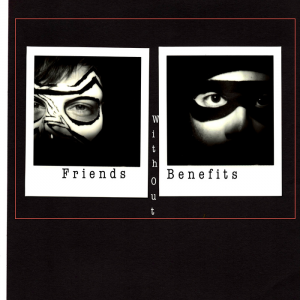 Friends W/O Benefits offer the premise that this album is a return to “experiencing” music over “hype” and technologically-fuelled sounds prevalent today. This is undoubtedly a noble cause, and I’m certain that these songs will translate well into a live setting, where they can truly push this idea of an unforgettable performance. The spoken-word/screamed vocals on ‘Real Enough For California’ stand out as the best on the album, as the vocalist explains his observations on how gadgets and technology corrupts and makes people seem like robots, almost qualifying as wry humour. The overarching feeling that the group keep pushing is that of This is Real‘s authenticity, and how unique they are for producing music in this way. This is a double-edged sword at best; it’s edifying to be soaked in the euphoria that the pair feel while making this, and you really do feel the sense of fun through the music. However, the constant reminder that “this is real”, beginning on the album title and oft-repeated throughout, including the entirety of the refrain of the title track, comes incredibly close to making the whole effect rather contrived. The conceptual equivalent of pinning a child’s drawing of their family to the fridge: yes, they’re rightly proud, but Dad was never that bald or had three legs- at least you hope they’re legs – everyone is smiling inanely and seems to be floating a few feet above the grass.

The physical release itself, i.e. the comic, consists of 12 pages of photographs of the band doing “dude stuff” – i.e., chillin’, ridin’ the subway, skatin’ – and is presented in bold black and white. The pictures come with captions of lyrics lifted from the album. Some placed next to relevant photographs, some confusingly juxtaposed next to images that make no sense of what either part’s message is really trying to convey. For those expecting something beyond what many bands place in booklet inserts in usual albums, there will be disappointment. However, the unifying feeling that joins the two parts together is that of the band’s pure joy in producing it. The positivity that emanates from the music is amplified here. Although the comic itself is disappointing, and little more than a booklet that arrives bagged and boarded, with a number out of #300 and a personal message, I cannot help but smile and congratulate the band on This is Real. However, my cynical self suggests that this could be interpreted as a marketing ploy to put out an album with a booklet but save on pressing CDs and purchasing a stock of cases.