“It’s just – Nature here is vile and base. … Of course, there’s a lot of misery. But it is the same misery that is all around us. The trees here are in misery.” – Werner Herzog

Werner Herzog’s distorted, echoing voice is the first thing you hear pour through the speakers on Full of Hell’s latest Trumpeting Ecstasy. The quote in of itself is mournful and despondent, but a harsh reminder that life is discomforting and vicious. And then the rest of ‘Deluminate’ blasts on. A savage slab of grindcore and straightforward death metal, something that the band has been hinting at more and more as their albums progress.

Fans may well have expected that Trumpeting Ecstasy would turn out as a more dissonant, challenging version of 2013’s Rudiments of Mutilation – their last full album that wasn’t a collaboration. [1] But it’s not a continuation. It’s Full of Hell sharpening their sound into something simpler. Trumpeting Ecstasy is a mostly straightforward grindcore album. I’d call it a return to basics, but Full of Hell has never been a basic band.

At eleven cuts in twenty-four minutes, Full of Hell make no effort to push the envelope time-wise. The hardcore/punk attitude that their music usually carries is still there: get in, play fast and hard, and get out. The first half of this album is mostly that. ‘Branches of Yew’ and ‘Bound Sphinx’ collectively stretch barely over two-minutes of unrelenting, grinding death. Even though ‘Bound Sphinx’ has a sludgy breakdown in it, this doesn’t take away from the shaking intensity, especially considering the intense noisy ending.

Despite the aforementioned straightforward nature of Trumpeting Ecstasy, there is still variation; ‘The Cosmic Vein’ begins heavy and choppy, delves into noise, moves into a deathgrind, shifts into a hardcore/punk jolt and then ends on a pure, old-school death metal note. It’s a trip of a track, but it melds together seamlessly without losing the dark edge or sharp teeth. Meanwhile, other tracks like ‘Fractured Quartz’ or ‘Digital Prison’ are played to pulverize; their blasts are crushing. It’s the kind of depraved, earsplitting grind that most probably associate with the band. 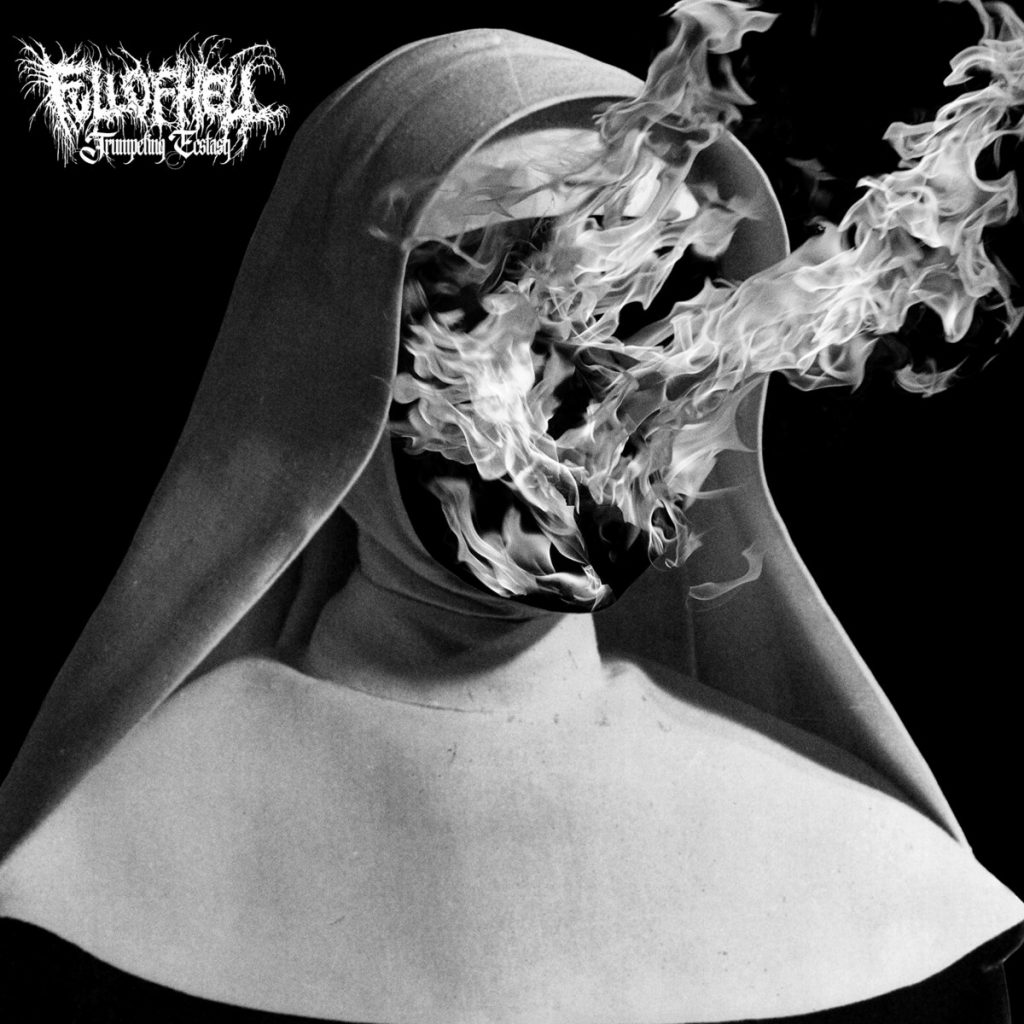 It’s the final two tracks that really make this album boil over in the best way possible. The first of these is the title track, which features Canadian singer/songwriter Nicole Dollanganger. Her voice is ethereal and gorgeous; the innocent crooning over static pulses paints an image of a picturesque night sky with a shrouded moon. Then frontman Dylan Walker’s vocals kick in, and the track becomes crushingly heavy. The production evokes mountains cracking every time David Bland’s drums hit.

“At the Cauldron’s Bottom” (featuring Nate Newton of Doomriders and Converge on vocals) closes things off with a fast, slamming, straightforward grind that moves into a moderate, sludgy tempo at the end. The first half burns at both ends, going from grind to a thick, choppy breakdown. However, as it moves towards the end, the track slows, and Bland’s the thundering drums march the album to its conclusion.

Trumpeting Ecstasy is a beast with a crooked smile. It’s as straight an arrow as Full of Hell has ever shot but it still goes above and beyond expectations of their previous material, even if it didn’t move in the direction Full of Hell usually move (i.e. more extreme). It showcases a band still at the top of their game and pushing themselves, even when they’re not pushing themselves their sound into manic white noise. If you were looking for something more like Rudiments or their Merzbow split, you get more of the latter with less noise. Listeners still get one hell of a grinding album, which will no doubt be talk of the town in extreme music circles for the rest of the year.

N.B. The video has a lot of strobe lighting.