‘Meliora’ is a Latin phrase that translates as the ‘pursuit of something better’, and in many ways that summarises Sweden’s Ghost‘s new album exactly. In all honesty, fans have put up with two admittedly average but original albums of doom-pop-metal lined with some – but not enough – great tracks from the Satanic quintet. Now, however, Ghost may have proven any doubters wrong. On Meliora, we see much more depth in an altogether more dynamic album.

Meliora is an album with a lot of scope, something rarely seen on previous Ghost offerings. ‘Cirice’ as a single follows a similar style to previous lead singles like ‘Ritual’ or ‘Year Zero’, but with more depth that makes a brilliant song with a more lasting impression. The evil-sounding riff is typical Ghost, but the more subtle lyrical theme that runs seamlessly with the accompanying music video is notably more interesting than previous singles.

‘Newly appointed’ Papa Emeritus III follows the established anti-Pope shtick. His haunting vocals still sound like all but one of a church choir became sick, and the strongest member was left to sing alone, fitting Ghost’s flamboyant religious (or anti-religious) theme well.

Elsewhere, the mysterious balladry of ‘He Is’ wouldn’t be out of place on a folk metal album. The track will have you singing along before you know it, but the balance between theatrics and well-crafted songs is struck perfectly, showcasing how the track has improved on the likes of the effective but one-dimensional approach in Infestissumam closer ‘Monstrance Clock’. Meanwhile, ‘From The Pinnacle To The Pit’ shows Ghost putting the music ahead of the showmanship; the bass-driven grooves merge with the staple that is Emeritus’ eerie vocals to show a side to Ghost that should have emerged a lot sooner. 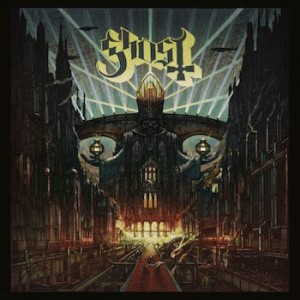 That’s not to say Meliora‘s flawless; tracks like ‘Majesty’ will soon be forgotten, but at least it stands as part of a more widespread collective. A catchy riff draws you in, while the way the verse bobs along is a cool new approach to hear Ghost attempt. However, it is a disappointingly dull chorus and a predictable middle 8 that let the song down.

Ghost have never been one to take themselves too seriously. A dramatic anti-pope for a singer and using the titles ‘Nameless Ghouls’ shows this, with one Ghoul even using this anonymity to tease that Dave Grohl (who produced their 2013 covers EP If You Have Ghost) “might or might not have” performed onstage with the group in disguise.[1] Nevertheless, the band have always been shrouded in a fair amount of controversy due to their use of blasphemous lyrics and imagery.

Here, this approach is taken up a notch. Lyrics are noticeably more clever this time around to back up the wholly more consistent and impressive songwriting. This improvement is noticeable throughout, from the sinister message hidden in ‘Cirice’ to the unclear nature of the lyrics in ‘He Is’. Instead of outright singing “Hail Satan” like on Infestissumam single ‘Year Zero’, the Lucifer-inspired messages are ambiguous, and in this way more thought-provoking. This makes Ghost’s primary goal of mocking the absurdity of organised religion (as has been stated by nameless ghouls in the past [2]) all the more poignant.

Towards the end of the album, listeners are treated to an immense climax with the stunning riffs and catchy chorus of ‘Absolution’ after the ominous organ of interlude ‘Devil Church’ to tremendous affect. This brace of tracks comes before closer ‘Deus In Absentia’, a song that bobs along in a quirky but truly entertaining way, before it opens up into a soaring finish.

It’s about time Ghost released an album that felt complete and dynamic, and thankfully they’ve done just that. New elements have been brought in to beef up their sound. Together these blend together to create a well-crafted and more spirited release. Despite these noticeable changes, Meliora never feels out of place, it fits quite comfortably as part of the evolution of the band’s distinctive approach.