6. Defloration of the Holy Cunt
7. Death is Crowned
8. The Domineering Profane
9. Of Fire and Brimstone

The merciless bedlam forged from merging subgenres that individually associate themselves with extremity and virulence is not one that lends itself to any form of subtlety. It becomes immediately apparent that Goat Torment certainly aren’t opting for the subtle approach; in fact, their choice of moniker alone begs no stretch of the imagination when conjuring any preconceptions as to the Belgians’ musical approach. Restraint has never been a high priority within the realms of blackened death metal; the likes of Belphegor and fellow hircine enthusiasts Goatwhore thrive on unrelenting waves of belligerent blasphemy to achieve their sound.

Consequently, inaugural track ‘Opening the Gates’ comes as a shock, with nearly four minutes of near-silent, disquieting ambience that perhaps lingers for too long; yet this serves only to amplify the impending sense of what is to come. Showing their true colours and quelling all doubts in an instant, ‘Bones Aligned’ welcomes the gratuitous flagrance of incessant extreme metal that Goat Torment peddle with such zeal; Torturer’s blast beats dominate the tumult whilst Kwel’s reverberated growls echo amidst his defining guitar riffs.

The muddy production helps to accentuate the impurity and uncleanliness that the album emanates so readily, though it does the band no favours when it comes to the more mid-paced, less-involved moments. Goat Torment are at their best when firing on all cylinders — which thankfully is most of the time — and when coupled with their keen collective ear for creating a sinister accompanying atmosphere, they become a force to be reckoned with. 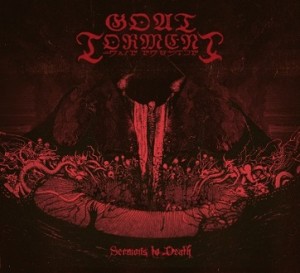 Entirely comfortable within their self-created ferocity, there is passion, belief and intent behind the music; the uncompromising flow of ‘Hierarchy of Negligence’ proves that the band can go all out for almost seven minutes without respite, and the resulting chaos bolsters their sophomore album to levels beyond the less pacey début effort Dominande Tenebrae. The lengthier songs have the potential to make Sermons to Death feel drawn out, yet the band’s sheer tenacity and barefaced extremity saves them from this fate. ‘Rising Dominion’ adds further allure with the inclusion of some ominous chanting and forceful, commanding riffs, slowing the pace before the duo’s unholy sermon is reawakened.

The disarming intermission of ‘Within the Realm of Darkness’ lingers only momentarily before being cast aside, and the full arsenal of Goat Torment’s seething depravity is unleashed with full force once again. Antagonistic and confrontational, the pleasantly-named ‘Defloration of the Holy Cunt’ bays for blood with insatiable recklessness and leads the charge for the remainder of this unrestrained opus.

Goat Torment are brazen and blasphemous and make no apologies for it. Beginning and ending amidst hellish ambience, the vicious, unfaltering blackened death metal that can be found within the flesh of Sermons to Death is unquestionably capable of satisfying even the most demanding fans of the genre.