When one of your favourite bands releases new material, it should be a reason for celebration, and a steely determination to purchase and listen to said material immediately. However, sometimes it can paradoxically prove to be an occasion for trepidation and frustration. Those questions that you ask yourself prior to hearing a note – Will I like it? Will it provide me with similar moments of unadulterated listening pleasure when compared to previous output? Will it reveal a complete change of direction and sound nothing like the band/artist I fell in love with in the first place? And will I fall in love all over again, with the new version, if there is one? And then there is the stress of finding an available time, a suitable location, and an isolated state of being, to properly listen to the record, in its entirety, without interruption.

Well, on this occasion, any apprehension or agitation was conquered quickly. A convincing argument made by my obsessive self that here was a band that could do no wrong, and an extended, single person car journey the day after official release, saw your correspondent throw himself headlong into Helios | Erebus, the seventh album by Irish post/space-rock titans God Is An Astronaut.

Where 2013 album Origins had displayed quite a playful, electronica-tinged side to the band, along with a lightness of timbre and sonic spaciousness not heard since 2002’s début offering The End Of The Beginning, Helios | Erebus is perhaps surprisingly God Is An Astronaut’s darkest and densest record to date. But, as the title might suggest (to those who know their Greek mythology [1]), amongst all the blazing intensity are passages of gorgeous, drifting ambience.

God Is An Astronaut are held in such high regard because theirs is a unique take on instrumental space rock, where the buzzing, electrifying guitar work of Torsten Kinstella meets a highly proficient, dynamic and arresting rhythm section, in the shape of Torsten’s brother, Niels Kinsella, on bass, and Lloyd Hanney on drums. Joining the band permanently two years ago, Jamie Dean now provides the ubiquitous spacey electronics (and occasional piano), without which the band would not have that essential contrast between ethereal and earth-shattering, that characterises their finest work. 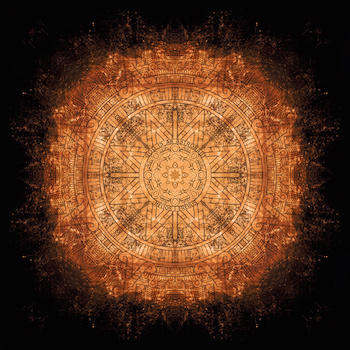 ‘Agneya’ begins in portentous fashion with a gathering storm of white noise and static, before those chiming, intimate, entirely familiar chords arrive, and Torsten and the supporting cast build to that previously described signature sound, and those trademark mini-crescendos. However, halfway through the track explodes unexpectedly with mightily distorted power chords not previously committed to record by the band. God Is An Astronaut live has always been a heftier, more exhilarating proposition, and I can only begin to imagine what they might do to venues and eardrums with this one.

‘Vetus Memoria’ has a lovely, piano-led introduction, before the track quickly gathers pace, and soars its way to another enormous conclusion, with the head-frying, buzzsaw guitar noise that underpins much of their live set being captured perfectly in the studio, perhaps for the first time. ‘Centralia’ too, from an extended, becalmed opening, abruptly opens up into another towering composition, while ‘Pig Powder’ and closer ‘Sea Of Trees’ are the tracks that sound most like the God Is An Astronaut that existed prior to the release of this album. The evocative, melancholic guitar, cosmic synth and gradual build of the former and the simple opening keys of the latter, give way to an excellent illustration of how the band’s use of Torsten’s heavily effected vocals as additional instrumentation, adding multi-dimensionally to their sound.

Guiding the album into a much calmer space are the beautiful ambient pieces ‘Finem Solis’ and ‘Obscura Somnia’, which help to highlight the band’s versatility and progressive attitude. But it is the title track that provides the ultimate highlight, with the band literally throwing everything that has made them such a vital proposition into the mix, with additional depth and weight: a lilting, widescreen intro and mid-section; sudden, dramatic changes of pace; that processed, other-worldly vocal; and a thunderous, raging ascension.

Existing fans of God Is An Astronaut will rate Helios | Erebus as one of their finest albums, and perhaps as the step they were expecting the band to take after 2010’s metal-tinged Age Of The Fifth Sun, rather than the cheerful, almost poppy explorations of Origins. The darkness and density here is likely to win them plenty of new fans too, in communities stretching into the post-metal and black metal spheres. A triumphant, enthralling record, and one that I immensely look forward to hearing live.

Footnote:
1. Helios was the personification of the Sun, or the God of light, while Erebus represented the embodiment of darkness.