Technical death metal entity Gorguts already have an astounding legacy of music to look back on. With iconic contributions to the genre such as 1991’s Considered Dead and 1998’s Obscura. The re-formed version of Gorguts are set to embark on a new era for their sound; their post-hiatus offering Colored Sands is now seeing a follow-up with the 33-minute titan Pleiades’ Dust – an EP of sorts that sees the project pushing not only the length of their compositions – the EP is one song – but the diversity of the style within. Original founding member Luc Lemay has again focused the record on historical and philosophical lyrical content; this time shedding light on The House of Wisdom [1] in Baghdad during the Islamic Golden Age. The thoroughly engaging themes put forth are enhanced by the production mastery and bass intricacies of Colin Marston (Krallice, Behold…The Arctopus), guitar leads from Kevin Hufnagel (Dysrhythmia) and phenomenal new drummer Patrice Hamelin. Both members made up the renewed Gorguts for the last release, and are returning to provide forward-thinking death metal to carry the interpretations and stories that Lemay has forged.

With the band embarking on such a lengthy piece, fans can expect them to continue with their progressive tendencies. As with Colored Sands, Gorguts are continuing down a path of expansive releases; Lemay himself referred to the sound they strive for as “motion picture music.” [2] That is fundamentally what Pleiades’ Dust is; a feature-length version of the signature death metal lattice that the band weave.

With this release they weave it to an extremely high standard, with enough ambient dissonance, interchanging riffs and absorbing lyrical content to justify the lengthy run time. Essentially, they achieve what Colored Sands left open for them to explore, and create the audible equivalent to an event – in this case the rise and subsequent ruin of the House of Wisdom – unravelling in all its detail. 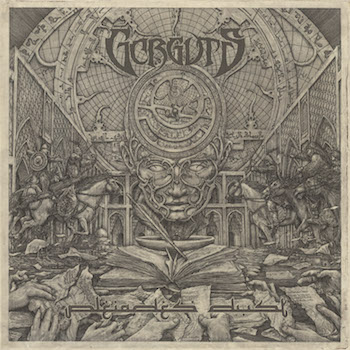 To condense every movement and interchange this record offers would be impossible without a blow-by-blow account, but Gorguts have essentially formed a piece of multifaceted technical death metal that once again solidifies the band as a contemporary boundary-pusher. With the opening moments featuring relentless, dizzying riffs, sporadic blast beats and Lemay’s signature roars and guttural exclamations commanding the armada, the track soon displays a prominent feature throughout this project. Pockets of melodic guitar work and vaster sonic moments begin to weave their way into the track’s consistent drive forward. This is where this record’s greatest strength lies: the ability to include variation and progression into their sound; anything from industrial death passages to more skeletal, purely lead-guitar-driven moments.

The song is broken up into seven sections, each bringing forth new ideas, offering alternating progressions from technical death metal into dark ambient, industrial and progressive rock passages. The instrumentation works in its bewildering flow and retains your undivided attention throughout; the half-hour feels fleeting even after numerous listens. It’s no doubt the release works better as one piece, rather than standing back and looking for each of its parts, but this in itself makes it far more impressive.

Pleiades’ Dust is a massive statement in an already standout discography. A fine example of excellent musicianship within the genre, but more importantly an example of taking a genre and using finer details to enhance it.

Footnotes:
1. Wikipedia article on the House of Wisdom.
2. Interview with Gorguts.