Spotify
Tracklisting:
1. Congratulations – You’ve Hit Bottom
2. Yr Electric Surge Is Sweet
3. Golden Dawn
4. Paper Tigon
5. And Redemption Fills The Emptiest Of Hearts
6. Opium
7. What Means of Witchery
8. As Far As You Can Throw Me

The broad church of hardcore was an exciting scene around the turn of the millennium. After working away for years in the underground, Jane Doe brought Converge to mainstream attention; The Dillinger Escape Plan were blending jazz-infused technicality with hardcore intensity; and At The Drive-In had released the superlative Relationship Of Command, which saw them thrust (uncomfortably) in to the limelight. In the underground, there were vast changes and growths afoot, too, as well as veterans such as Sick Of It All continuing to go on strong. Screamo was starting to branch off as its own sub-genre, with bands such as Hot Cross and Off Minor – both containing former members of Saetia – putting out well-received records; a growing appreciation of post-rock within hardcore found its natural expression in City of Caterpillar‘s superlative self-titled record; and pageninetynine continued to confound all conventions of what hardcore should be and sound like. [1]

One record that arrived at the tail end of this exciting time, and often feels overlooked, is The Moon Is A Dead World by American band Gospel. Released in May 2005 on Level Plane Records (run by Billy Werner of Hot Cross/Saetia), the prog-infused post-hardcore/screamo of the album felt like an anomaly then, and still does today. It’s not that Gospel were the only band infusing hardcore with heavy prog influences, even if they did take it to different places than other bands – and the album was one of ten produced or recorded by Converge guitarist Kurt Ballou in 2005 alone, making his involvement less notable than it would have been in previous years; and the sarcasm and sense of humour in the song titles and lyrics was hardly enough to make them stand out from their peers. Instead, there’s a sense of strangeness present through, an anxiety-ridden eccentricity and energy that is like nothing I have heard before or since. It’s an album of such quality and character, that its present overlooked status feels like nothing short of a disaster, and a loss for forward-thinking music as a whole.

It doesn’t take long for The Moon Is A Dead World to demonstrate what is on offer. Opener ‘Congratulations… You’ve Hit Bottom’ sets out the bleak lyrical and thematic tone from the start, whilst musically the prog influence is apparent early on, with each member of the band seemingly moving in different directions, before coming together with desperate, almost primal intensity. Each member of the band puts in a virtuoso performance, with the production allowing each element to come through strongly – almost overwhelmingly so, when taken as a whole. The swirling, 70’s-esque keyboards of Jon Pastir give the band an extra element that’s more Yes than comparable to the dance-punk that was popular at the time. His guitars, and those of vocalist Adam Dooling, often seem to soar and glide with no convention for song structure. Meanwhile, the rhythm section of Sean Miller and Vinny Rosebloom [2] is a real powerhouse. Sean’s bass is blessed with a warm, strong sound, meaning that his often intricate rhythms and leads come through strongly; but it’s Vinny’s drumming that is individual highlight. Jaw-droppingly technical and intricate, yet never less than powerful, it’s one of the most forward-thinking and impressive drum displays ever recorded as part of a punk record. If Converge’s Ben Koller helped redefine what hardcore drumming could sound like with his performance on Jane Doe – full of accents, turns, and moments of intricacy – then Vinny took the style to its apex here.

As praise-worthy as the individual performances are, it’s how they come together that makes The Moon Is A Dead World such a special album. There are multiple melodies and movements vying for your attention at any one time, yet they always feel as if they are working towards a common aim. The songs are dense, packed full of ideas and character, often making them feel longer than they are – the majority of songs are under five minutes long, packing prog levels of ambition in to hardcore-sized songs. The notable exception to this is third track ‘Golden Dawn’, which, at 9 minutes in length, feels like multiple songs combined together with the way it moves through different textures and atmospheres. The spacious, largely instrumental mid-section feels as if it’s been transplanted from some lost classic of the 70’s and moulded in to a more modern, punk-edged form, possessing the emotional integrity and desperation of screamo even as it moves through very different soundscapes. Yet even the shorter songs pack in a multitude of ideas and moods. ‘Paper Tigon’ opens sedately, before lurching in to frantic, progressive screamo that isn’t too far removed from Hot Cross at their most intense; it then shifts in to an anxious, tension-filled mid-section that drives forward in to synth-led, prog rock territories, before finally closing in cathartic, explosive style. Instrumental track ‘Opium’ serves as a more down-tempo palate cleanser, heavy in Middle Eastern-inspired melodies and hazy atmosphere, though even here there are moments of post-hardcore fury; and penultimate track ‘What Means Of Witchery’ begins in spacious, depressive style, the tone of the music making the lyrics seem bitterly defeatist (“I am a man/capable of anything”), a feeling that persists even when the music becomes faster and louder later in the song, culminating in one of the album’s high points as Adam screams the song’s title in utter desperation at the 4:37 mark, launching the band in to one of the most fraught, hair-rising movements on the whole of the album. 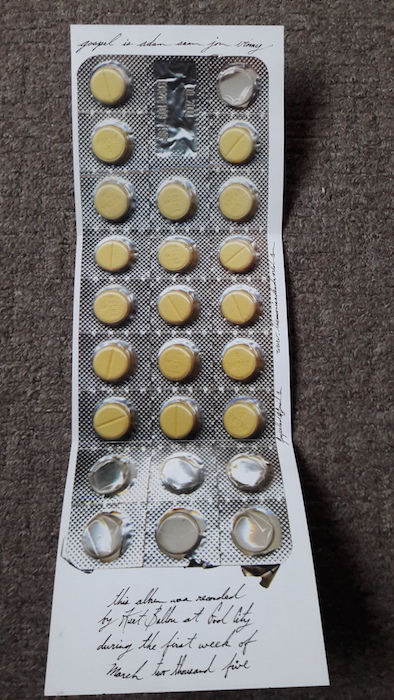 Taken from the liner notes of the CD booklet. Photo credit: Stuart Wain

I have no real idea what the lyrics of The Moon Is A Dead World are about – despite having lived with it for over ten years – beyond a sense of desperate anxiety and loss. Even aside from the song title ‘Opium’ (the album’s sole instrumental track), references to drugs are littered throughout the album. Drugs are never a popular topic amongst hardcore fans – but there’s always the feeling that they are only a mask for something deeper and more profound. When Adam shout-sings “Hey you/You got a cigarette man?” during the closing moments of ‘Golden Dawn’, it’s done so with such feeling that the actual meaning of the words is irrelevant; only the emotion they express matters. Whatever Adam’s trying to get across, it’s urgent, life-or-death stuff, even if something is lost in translation between vocalist and listener. A comparison to Cedric Bixler’s lyrics for At The Drive-In and The Mars Volta is valid, but The Moon Is A Dead World never goes off in to the realms of lyrical nonsense that those bands often did – there’s always something concrete at the heart of what Adam sings.

What’s hard to convey is just how heart-stoppingly thrilling an album this is. The sense of adventure, anxiety, and restlessness means that the energy levels stay high, and even if some might found the technical prowess on display to be hard to take in, it’s hard to resist being caught up in the energy and momentum that Gospel create. Each song is an abundance of highlights, with clever changes in tempo and intensity ensuring that it never becomes an overwhelming listen. Even after literally hundreds of listens, The Moon Is A Dead World still has the capacity to excite like few other albums do.

All of this makes the fact that it so little-remembered hard to explain; but it’s easy enough to speculate. An arrogant, sarcastic review from Pitchfork a few months after release [3] will not have helped Gospel find a wider audience, though as that Pitchfork review accurately notes, prog has never been considered to be a cool genre. The Moon Is A Dead World occupies that awkward space between widely different genres – too prog to be screamo, too screamo to be prog, meaning that there was never any natural audience of any size for the band to find. It’s also notable that the album was released at a time when terms such as ‘screamo’ and ’emo’ were coming in to mainstream use, when the likes of My Chemical Romance and Jimmy Eat World took the big leap that bands like Thursday had almost made a few years earlier. This rising from underground roots to become genuine mainstream stars with largely teenage audiences led to an inevitable backlash against any terms they may have been connected with. Nor were Gospel the first to mix hardcore inspired sounds with prog, as noted above; aside from Cave In‘s almost-mainstream, Rush-recalling Jupiter, Shai Hulud had been recording prog-influenced metalcore since the 90’s; The Mars Volta had brought prog-infused post-hardcore to the mainstream with the divisive Deloused In The Comatorium following At The Drive-In going on hiatus; and in the underground, Circle Takes The Square‘s captivating As The Roots Undo cast a long, emotional, prog-inspired shadow that few could hope to live up to. On the more prog side of things, Mastodon‘s rise to fame following the release of Leviathan left little room in the media for other bands to occupy – a space which Gospel may have otherwise found receptive to their sound.

Or, more bleakly, there may simply be no good reason for The Moon Is A Dead World being so over-looked. It is difficult for any album, no matter how good, to break out of the underground and to gain wider attention. That Level Plane ceased operations in 2009 means that there have been no further re-pressings of physical copies of the album, resulting in vinyl selling for over £100 and CDs for around £30 on Discogs; and whilst it is available on iTunes and Spotify [4], simply searching for “Gospel” is bound to bring up a lot of diverse returns, making this an album that is unlikely to be found unless one is to intentionally go looking for it – which can’t be done if you don’t know it exists in the first place. For an album this ambitious, creative, and simply good to suffer such a fate is a tragedy.

As for Gospel, they split in 2006, before briefly re-forming and recording two demo tracks in 2010. A single, ‘Tango’, was released for free download on Bandcamp in 2010, with its basis as a jam piece very apparent and a sound that owed more to prog and psychedelia than anything on The Moon Is A Dead World. And since then… nothing. The band have seemed to simply slip away, with their status unknown. The only certainty is that, in The Moon Is A Dead World, they left behind a work of superlative quality, that deserves a better fate than to be forgotten.

[1] There are many more bands – including Botch, Deadguy, and Coalesce– that were doing new, exciting things with hardcore around this time than could possibly be mentioned here.

[2] Sean and Vinny have also played in Helen of Troy, whose experimental style of screamo may have had an influence on Gospel’s direction. A collection of Helen Of Troy’s releases can be heard on their Bandcamp.